Don't you hate that?

When your morning seems to be going smoothly and you have your day pretty well planned out, then something goes and screws it up. This morning I got out of bed and wandered into the lounge to find Deane had cooked breakfast. Bonus. So I sat down and ate, then got dressed in my new running shorts and various other clothing items, finished getting the boys ready and headed out the door. Once they'd been dropped off I drove to my usual running spot, Karori Park. About a third of the way around my first kilometre (of five) I get a call from the school advising that X had fallen and hurt his arm, had gone all pale and was still sobbing quietly half an hour after the accident. They were concerned that he had fractured it and wanted me to pick him up and take him to the doctors to be checked. Well there goes my run! Finished the one kilometre, walked back to the car and drove to school. (Apparently it's becoming a necessary part of life for me - I mentioned to Deane that I only got to run 1k instead of 5k, and he said "I know, you told me four times already!" - strange that I would be so bummed out about not being able to go for a run, I thought I still hated it...)

Deane had organised an appointment at the doctors for 10.45am so we fluffed around for a bit before heading off. I had to cancel my 10.30am appointment for work, and it turns out I'd forgotten a PTA meeting that was being held at 8.45am at school - oops! Went to the docs, they thought it needed to be x-rayed so referred us to the emergency department at the hospital. I had to pick T up from kindy so he wouldn't be left stranded there at 12.30pm, since the hospital is often not as efficient as you would hope. Turns out X has not got a fracture that they can see, but the little extra bone in the elbow that children usually develop by the age of three does not appear to be there. Whether he had one and it pinged off when he hit his elbow, or whether he just hasn't developed the extra bone yet the doctor wasn't really sure. They stuck his arm in a cuff/sling thingee, organised a follow up with the fracture clinic for a week to 10 days from now, and sent us home. Good thing I picked T up beforehand, we got out of the hospital at 12.45pm.

On a brighter note, I'm halfway through the third pair of socks for T for Christmas, which leaves the three for X to do. I haven't got much knitting done lately because I've been trying to sew up a set of wizards robes for the Vodafone Christmas party next weekend. I bought a pattern and 12.4 metres of fabric, which is how much I needed according to the pattern (I wanted a different colour lining inside so had to buy double the fabric). According to the measurements on the pattern directions, I needed to make a small size robe. Following the directions exactly I made the small size robe, which turned out to be big enough to fit Deane, who is way bigger than me!! So there are currently some serious moderations going on!! A dress-maker I am not, so I really hope all this slashing and hacking I'm doing will turn out okay in the end - I'll keep you posted. What really annoys me is that after spending $120 on the fabric, I'm only actually using about a third of it - the rest is 'wastage'. Now I know why I don't make my own clothes!!

We had a lovely long weekend for Labour Weekend, heading up to Napier on Saturday afternoon after T finished swimming, and heading back to Wellington Monday afternoon. The weather in Napier was gorgeous as usual, the kids enjoyed playing outside on grass (something they don't really get to do here) and I got to see my bestest friend Tania again - and she was kind enough to let me watch Twilight (again!!) and happily drooled alongside me over the prettiness that is Edward Cullen, and to a slightly lesser extent, Jacob Black. We're both looking forward with great expectation to the release of New Moon (19th November!!!!) and are trying to organise a weekend trip for me to Napier, so we can go together. Obsess, obsess, obsess...

I forgot to mention in my last post the lovely package I got in the mail for the first instalment of the Needle Food Sock Club #2, so here is a pic now: 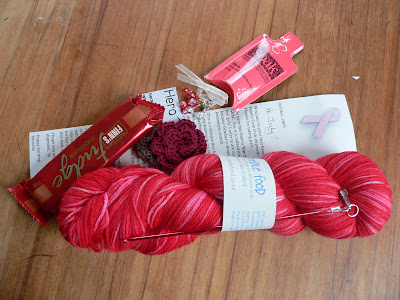 It's specially dyed to celebrate (is that the right word?? Seems a little morbid) Breast Cancer Awareness Month, and Michelle kindly donated $2 on behalf of each sock club member - how sweet! Now what to make with it? Bears a little more thinking...

X's 7th birthday is fast approaching, and hot on it's heels is T's 5th birthday. It has only recently occurred to me, and I haven't organised anything yet. Urgh, must get on to that. I think I'm going to have to drop some Committee commitments, (heh heh, that sounds funny!) - I seem to be doing too many things. I keep forgetting all the stuff I have to do! But which to drop? We're probably moving soon anyway so it wouldn't make much difference I suppose, but I'm still going to feel stink about it :-/ Kindy's nearly done, I think I only have one meeting left (in November) so that's one down, I think perhaps BoT (I'm not actually on the Board, I only do the Minutes). PTA I'll stick with, there's only four of us!! And Guild I'll carry on with for now, it's starting to get a little hairy there at the moment. Sigh - now to figure out how to give them the bad news... (jeez, makes me sound a bit egotistical doesn't it? Like, "oh my God, they'll be lost without me!" I know they'll be fine and will find a replacement, I just hate letting people down).

So anyway just to recap, much like this post, my day has become a bit of a mess. I should probably go now and send those PTA Minutes I keep forgetting about - I edited them this morning (finally - the meeting was last Tuesday!), but I forgot to actually send them. I'd forget my head if it wasn't screwed on...

Please excuse my pointless ramblings, I'll be going now
Posted by kreachr at 13:25