so there's lots to update you on. Where to start??? Here we go:

Running - ha ha, what running? I only managed to go for three runs last week. It was supposed to be run 11 minutes, walk one minute, x 3. On Monday it was more like run 11 minutes, walk one minute, run eight minutes and give up because it was pouring with rain, I was saturated, my hands were frozen into ice cubes, and my earphone thingees kept falling out. Ordinarily that wouldn't be a problem and I'd just put them back in, but my hands wouldn't work. The wind was really strong and it was like torture so I cut it super short and went home for a hot shower. Tuesday the weather was shite, so I didn't go for a run. Wednesday was better, but my run only consisted of two runs of 11 minutes - the third 11 minute block didn't eventuate because a) my bestest friend of all time Tania was at my place (more about that later) and b) my ankles were almost audibly screaming at me, and c) there were heaps of City Council workers planting, digging etc etc and I was feeling extra self-concious. Thursday was a rest day (poor ankles) and Friday the weather was shite again. Managed to get a run in on Saturday but it was only 15 minutes long - I was in Napier and had already run around in a circle, and didn't feel like running around it again. I know what you're thinking, "excuses, excuses". Yep, I've got plenty!! Today I haven't been because there's just too much to do - first day back at school/kindy, and I still have to unpack from our trip to Napier, not to mention catch up on all my online stuff and thank everyone for their birthday wishes (of which there are plenty!).

Knitting - has been pretty slow this week, hardly anything done at all. I have however managed to crochet (almost) four squares, what was left to do on the Ron Weasley blanket swap before needing to send them away. Due to time constraints the last three blocks are plain single coloured crochet, simply because it's much quicker to do. Hope nobody minds... 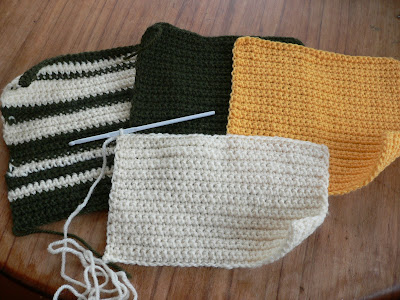 I managed to get quite a bit done on my 'Sexy Vesty', but haven't picked it up since last Monday, so hopefully I'll be able to do a bit more on it this week. It's actually starting to look like a vest now, but I still have to finish the back, and do the ribbing around the armholes and neck (that's going to be a lot of stitches to pick up!) - can't wait to be able to wear it! Hope it fits... 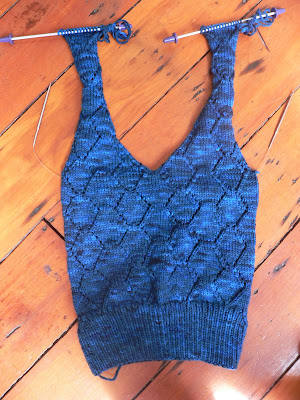 Haven't started any more socks yet, I want to finish the vest first. Hopefully soon.

Reading - finished Memoirs of a Geisha - it's a good read, and I thoroughly enjoyed it. Rather enlightening. I'm still reading Deathly Hallows to Xavier - we're up to chapter 30 now, so we're getting close to the end. I have five chapters to read of Chamber of Secrets to catch up with the discussion thread on Ravelry. Audio book perhaps? While I finish my vest...

I started reading Twilight on Friday (I think) and finished it at 11pm last night - LOVE. IT. What's that now... obsession #8? #9? Ah, I lose track... Watched the Twilight movie with Tania on Wednesday night, and instantly wanted to watch it again. I started to, and watched up to the apple scene in the cafeteria (one of my favourite bits!) and then had to admit defeat and go to bed. I was up alone, well past midnight, and still had to get up early in the morning :-( Deane's often out at work nights, so I guess there's still plenty of opportunity to watch it again ;^) Now I have to read New Moon before the movie is released :-) This may actually be possible thanks to my bestest buddy Tania, who kindly bought me the entire series for my 30th birthday while she was here. Bestest friend EVAR!!

And they look so pretty on my bookshelf, next to my other favourite books: 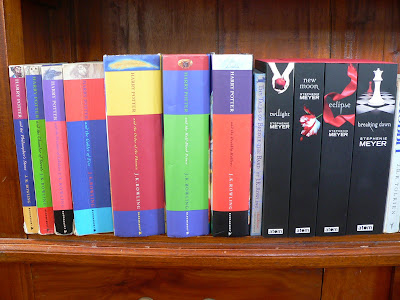 And speaking of books, I also managed to get a copy of Diana Gabaldon's latest book in the Claire/Jamie saga - An Echo in the Bone. Can't wait to read that!! Ooh, lots to do!

Miscellaneous - so anyway, as you may know, Sunday was my 30th birthday. Ugh. On the up side however, Deane took X up to Napier on Tuesday last week to stay with his cousins, and T went to stay at a friend's house. Deane came home with a surprise in the form of (you guessed it!) Tania. Needless to say I was overjoyed - haven't seen her for ages! So that night we went to the movies to watch Year One, which was quite a funny movie. I wouldn't say 'rolling on the floor' funny, but pretty good. We had quite a few laughs. On Wednesday we went shopping during the day and visited the City Gallery, and watched Angels and Demons and Twilight in the evening. Thursday was a pretty lazy day (more shopping involved), and I took her to the Quilters Guild meeting that evening. It turned out to be quite a good meeting with yummy cake, free fabric (it was the Guild's 19th birthday) and a lady came to talk about button collecting. She was quite funny and it was surprisingly interesting and informative. She has an amazing collection. Friday we pottered around (as mentioned before, the weather was shite) and once Deane finished work we headed up to Napier. Saturday was full of visiting family etc etc, Saturday night we went to see Fame - meh. The dancing/singing/musical talent was good, but the storyline sucked. I'd recommend waiting for the DVD. Sunday involved lots of blobbing around reading Twilight, and we headed home late afternoon (with lots more reading during the car trip). On arrival I found a surprise package sitting in the letterbox containing this: 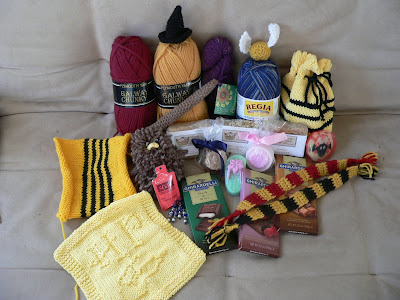 Can you believe it?? I'm totally spoilt! This was from a group of ladies on Ravelry in the Harry Potter Crafters group, who took pity on me because my swap package was delayed two months. Aren't they just amazing?!? There's lots of lovely soaps in there which smell divine, yummy chocolates, gorgeous stitch markers, my very own owl, snitch, mini witches hat and wand, lots of scrummy yarn, a neat project bag, washcloth, afghan square, bookmarks and some wool wash. I was totally blown away. And it came with the coolest letter, which said:

It has been brought to the attention of the Ministry of International Post Owls that your package has been delayed for an unusual amount of time. Upon further inquiry into this matter we discovered that your little brown owl seems to have been found exhausted by the weight of your parcel on the floor of the International Border Owlery.

We have decided to enclose your little owl inside the package in order for him to recover from his international flight.

This particular owl seems very familiar, as if he might be related to the famous Ron Weasley's owl, Pig, who has also been known to be overcome with exhaustion while delivering large post items. Please forgive the delay in your post.

We, at the Ministry of International Post Owls, strive to do our best for the wizarding community.

How awesome is that?!? There are some amazingly lovely people out there, and I'd love to meet them some day.

So all up, it's been a pretty damn good week. I got a pretty necklace from mum and dad. Unfortunately, I can't seem to get a decent picture of it, but can tell you it's really lovely :-) I got to spend time with family and friends, relax, and do the minimum amount of housework. I guess birthdays aren't all bad. This year was pretty good - maybe I should turn 30 more often! Now to carry on with life, and try to enjoy my 30's...
Posted by kreachr at 12:29