Wow, is it really October already?

This year is zooming by so fast, you can hardly see it. We're nearly halfway through the school holidays, and so far there haven't been any major upsets or injuries - fingers crossed! We've spent most of the time inside, because classic New Zealand weather knows when it's holidays, and decides to bring on the rain. We have had some sunshine, but my boys are mutants and prefer indoors to out. That could possibly be my fault, as I'm a bit of a cave dweller... my interests seem to all be indoor pursuits, except for my latest exercise kick, running. Which is still ticking along okay, nearly finished week six of the running programme - soon I'll be doing that half hour run!! (Theoretically anyway - we'll see). I've got what I guess you could call a 'running injury' - my left leg/ankle doesn't seem to like the pounding it's getting. Walking is fine, but running is a whole other ball game. I'll have to see how it goes.

Laundry Lottery has been disappointing this week, no winnings at all - I guess this is due to the fact that X isn't at school, eating little snack packs of food on the playground and shoving the packet into his pocket (which is clearly better than throwing it on the ground, but not as good as putting it in a rubbish bin). All Deane's washing bar the undergarments are lying on the floor on his side of the bedroom, so I'd imagine there's all sorts of goodies lurking in his pockets over there! But darned if I'm going to pick up all his clothes for him, the washing basket is in the corner! Seriously!! You'd think he could figure it out for himself...

Knitting is going well (due to all that inside time!) - I've finished another pair of socks for my OWL - so that's two pairs for T done, one left to go for him, then on to X's three pairs. The Christmas presents are starting to pile up which is good. I've FINALLY cast on the vest I've been wanting to make for ages with my yummy Needle Food yarn I bought at the last Craft 2.0: 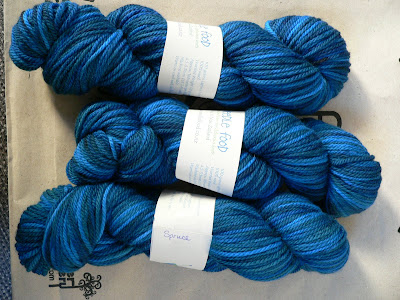 I'll keep you updated with progress pics! This is fitting into the new class assignments for the HPKCHC on Ravelry, it'll be for Divination. I've got several other ideas for classes as well, which I'll post on here as and when I start them. Another project I'll be casting on soon is a pair of socks for dad - he mentioned he wanted a pair last time we were visiting, so I'll make him some for Christmas. This fits in perfectly for Charms, and with another group challenge on Ravelry - Sock Knitters Anonymous. One of the October challenges is to knit a pair of men's socks. Sweet! I love when things work out well. I've done six of the required 10 squares for the Ron Weasley blanket swap and I've only got four more to do, which will quite possibly be crochet, due to the class assignment for Transfiguration (alter a knitting pattern into crochet or vice versa). Not sure if it'll work out yet, so I'll give it a go soon and see what happens.

I spun up the Ofelia roving I got from maude&me, and managed a pretty messy chain ply (that will need some serious practice!!). It came out about a chunky weight, 149g and 114 metres: 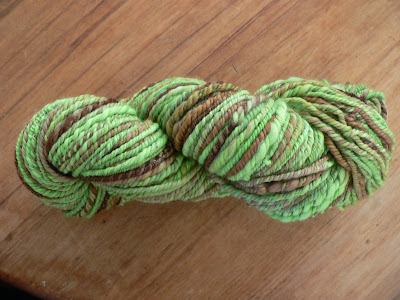 I called it Chunky Bug, because the green colours remind me of insects - I don't really know why... Not sure what I'm going to make with it yet, possibly a pair of wrist warmers.

I've received a couple of my birthday presents early - the set of Hiya Hiya interchangeable circular needles I've mentioned before which I love!! These are absolutely bloody fantastic :-) And the new cellphone I knew I was getting from Deane (no surprises there). The joys of having a hubby working in telecommunications! Although I have to say it was a bit of a surprise when I found out how much the phone retails for - it's a $1,500 phone!! Better look after this one!! Good thing I like it too - it's great for running, as the earphone thingees are designed specifically for it, I can listen to my favourite radio station (or any music I want, if I get round to downloading it, or - hmmm, maybe Harry Potter audio books...). It has an 8 megapixel camera which is pretty decent. I get my emails straight to my phone now as well. It's got GPS, and you can download a running programme that tracks your running route and the total distance so you know how far you've gone - may come in handy later! Basically it's got all the bells and whistles (as it should for that bloody price!). The funny thing is, Deane didn't even know how much it cost - he just asked his friend to order in the best phone available with (insert functions here) and that's what he came up with. Bonus for me :-)

I'm rather enjoying reading Memoirs of a Geisha, although I'm only up to chapter nine (about quarter of the way through). I'm trying to get it read fairly quickly, because I've got another book out from the library that is due back in about three weeks that I really want to read. Now don't laugh, but I've decided to read the Twilight series by Stephenie Meyer. Hey, I told you not to laugh!! Yes, I've finally succumbed to the madness, and jumped on the bandwagon. Although I've been told it's not as good as Harry Potter (not surprising), it should be a good read.

Anyway, better get moving and make lunch for myself and the boys (and continue knitting of course!) Still haven't done that vacuuming... (don't worry mum, the washing's done, the house is tidy, the beds are made, and the bathroom is clean - I just hate vacuuming).
Posted by kreachr at 11:37