I ran five kilometres in 30 minutes today! Woot!! I have officially completed my running programme goal - to run for a full 30 minutes. The next step was supposed to be to run 5k, but I've done that too - awesome! Now I know I can happily go for a run for half an hour, anywhere, anytime (within reason of course, we don't want too many hills!!) I repeat, yay me!

Moving on... I have also finished my Sexy Vesty, and I luuuurve it :-) Pictures taken by X, hence the blurry quality: 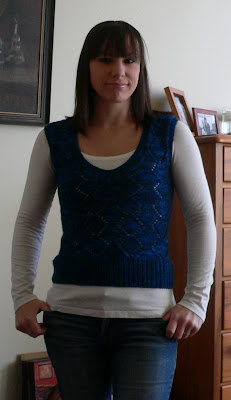 And of course T had to get into the pic (he's such a cutie!): 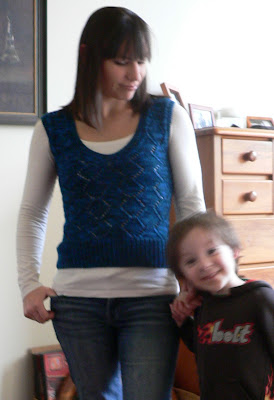 Michelle (of Needle Food) tells me that colour was a one off, and that's all there was of it, so it's totally unique - how cool is that? Unfortunately though, that's about all the knitting I've been able to accomplish so far this month, mostly due to the fact that I spent an entire week reading the Twilight series. After I'd read the first book (over about three days) I devoured the next three in the space of about five days or so. Deane wasn't terribly impressed, and the housework suffered severely, but I finished the books on Monday, the house is recovering, and Deane got over it :-) Can't wait for the new movie to come out - 19th November I believe. Ooh, it's gonna be good!! Luckily for me (not so much for Deane) we have the Twilight movie on the terrabyte drive, so I can watch it whenever - awesome! btw, for those who partake in Twilighty goodness, after much deliberation I have decided I'm cheering for Team Edward ;-) Although Team Jacob comes a very close runner up.

Anyway, the boys are back at school and kindy, so Laundry Lottery has recommenced - here's this weeks 'winnings': Not much excitement there, just the usual suspects - empty food packets, and a business card thrown in for good measure, courtesy of Deane.

Well, I must away, off to Spotlight to buy 12.5 metres of fabric to make a wizard's robe for the Vodafone birthday bash in a couple of weeks...
Posted by kreachr at 11:00