This week is in between X's 7th birthday, and T's 5th birthday. One celebration is over, and another is yet to arrive. X's birthday was a fairly quiet affair - presents in the morning before school, treats for his classmates at the end of the school day, a friend staying over on the weekend, and a pretty boring looking round birthday cake with some writing and some coloured chocolate drops scattered about on the top. He seems to be okay with it.

Once that was all over, I asked T who he would like to invite to his birthday party, since he was turning five and it was a rather important event. He said "just X". What, no kindy kids? "No". Oh well, I guess T's fifth birthday will also be a fairly quiet affair. Less stress for me I suppose, but it just seems... not quite right somehow. We've decided to head up to Napier for the weekend, as he seemed rather keen on seeing nanny, poppy, nana and the cousins, so I guess that will do. I'll fit a birthday cake in there somewhere! It is now less than a week until he starts school and I don't know who is more excited. Probably me. I'm pretty sure I'm going to be a blubbering mess at the kindy farewell though. Possibly also the first day of school. Note to self: take some tissues!!

It occurred to me recently that I've become one of those overly emotional women who cries at everything. I'd never considered myself much of a 'girly' girl - I played cricket as a child, loved to help dad outside with building, brickwork, mixing concrete, lifting heavy objects, the usual tomboy stuff. Wonder what happened? I find myself crying, not only at actual weddings of people I know and love, but weddings of fictional characters on TV!! I was watching a NZ Post ad the other night, and got all teary-eyed. (Ended up sending a text message to Deane lamenting the fact that I have 'stupid irrational female emotions'). I'm quietly searching for the perfect handbag, have a new interest in shoes, occasionally wear makeup (makeup for Pete's sake!!) - did I grow up somewhere between 25 and 30? That's the only explanation I can come up with... The thought that I could be walking around some day soon wearing a dress with a pair of strappy heels, makeup and a handbag!! What is the world coming to?

There was a time when my wardrobe consisted of jeans, track pants, t-shirts and sweatshirts, and my only footwear was a pair of Doc Marten boots (minus the laces). I don't think I even owned makeup of any description, nor did I have anything resembling a skirt. Now, I have four dresses and three skirts, and at least one pair of girly strappy heels that have sparkly diamantes on them. Don't get me wrong, I practically live in jeans still, but now they're usually teamed with a nice top or cardigan. I hardly ever wear t-shirts any more. Amazed? I am!

Anyway, moving on (this post is starting to get a little disturbing). My running is going fairly okay - I'm alternating between Karori Park and the waterfront. Unfortunately I've put on about four kilos in the last month, and I'm pretty sure that's because I've been eating stupidly large amounts of not-quite-so-healthy food. I'd better stop eating so much crap, and get stuck into the fruit and veges. Set a good example for the children and all that. And continue running of course. Now that we're coming in to summer, and T will soon be at school all day with X, I might add a bit of swimming into the mix as well. Ahh, the convenience of the local swimming pool being just a few doors up the street!

I'm onto the last of six pairs of socks for the boys, so I'll be able to get on to all the other Christmas presents I was planning to make this year. I'm still not sure if I'll get them all done - some friends and family may be receiving IOU's this holiday season!! Knitting seems to go faster when you have a view like this: 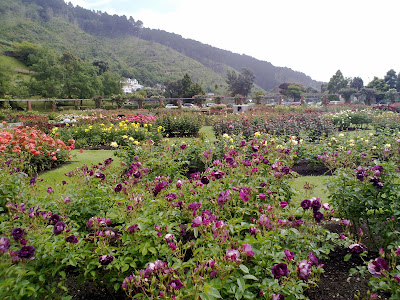 My little knitting group meets every second Sunday at the Wellington Botanic Gardens. This is the view from outside the cafe (Lady Norwood Rose Gardens). Bliss on a lovely warm sunny day.

Soon it will be the 5th December. This may have no relevance to your average person, but this is the date I will be attending the New Moon movie in Napier with my bestest friend in the whole wide world - can't wait!!! I downloaded the soundtrack a little while ago. At first I wasn't terribly impressed, but the more I listen to it, the more I like it. It really grows on you! It's great for running to. I'd like the Twilight soundtrack as well, which I really enjoy. Unfortunately I haven't been able to get my hands on a downloadable version of it yet - I'll keep working on it.