Is it over yet?

This is what I have woken up to every morning for the past two weeks: 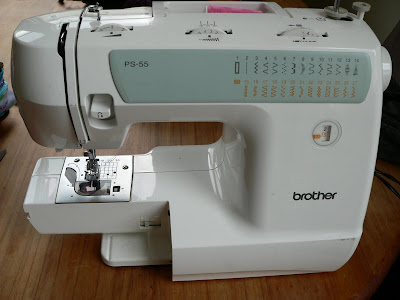 I love my sewing machine dearly, I really do, but by God am I sick of it right now! It took me a week to sew my wizards robe for the Vodafone Christmas party this weekend - that was done last week - all 12 metres of fabric hacked and slashed to create something I'm mildly proud of, although it could certainly do with improvement (not that I'm going to do any more alterations, I've done enough already!). When I was nearly finished, Deane informed me that I would have to make his costume too. So back to Spotlight we trotted, purchasing another insanely large amount of fabric, the choice of which took forever thanks to Deane's indecision on exactly what he wanted (boys whining the whole time of course - they finally ended up entertaining themselves for the last ten minutes pretending to be bolts of fabric on a shelf, waiting for unsuspecting customers to come along and buy them). That took me almost another week. I'm nearly done, just have to sew a hundred million domes onto one of the robes - yes, one of them. He required two! Urgh :-/ Anyway, pictures of these wonderful creations will just have to wait until after this weekend - hopefully we'll get some good shots of us in full garb at the bash, which I will upload into my next post.

So anyway, that's three items complete (all black, I'm getting kind of sick of black now too, but don't worry I'm sure it will pass). What I'm sewing now is 70 little fabric hearts, which will be turned into little beany bags - one for each student at X's school. That's taken me the last three days. Here's the pile, almost complete: 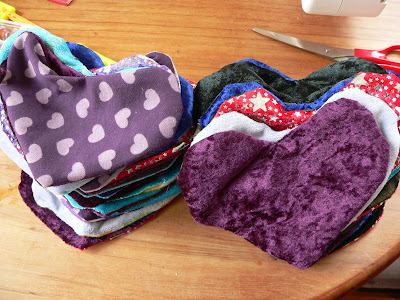 Doesn't look like much, but there's 60 hearts there. I still have 10 to do, which are sitting on the floor waiting to be completed: 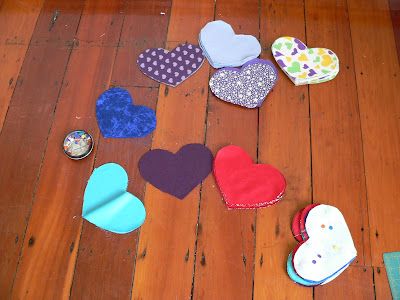 I should have them finished by the time I go to pick X up from school this afternoon. They will be passed on to the remaining PTA members for filling and finishing. They need to be finished by next Monday, when the older school children head off to camp. It's a lovely idea and ordinarily I wouldn't mind making them, but in conjunction with the other sewing projects in the last fortnight and the limited amount of time available to complete them all, I didn't have time to enjoy any of it really. Sewing is supposed to be fun and relaxing, but I found it stressful and frustrating. Another half hour though, and it will all be over (except for those gazillion domes still to be sewn on - Deane offered to help with that... should be interesting!)

Just to be clear, and so you understand why this sewing is such an issue, all I have done besides this sewing is some cooking, washing and running the boys to and from kindy and school. Oh, and a little TV watching and reading whenever my back gave in to all the crawling around and sitting on the floor. Literally nothing else, just sewing allllllllll day!! I haven't had time for any knitting at all. That list of Christmas knits is not getting any smaller!! Hopefully by the week's end, I will be able to get back into more of a routine which involves normal every day stuff like actual housework (you should see this place, it's a tip!!) and some knitting time. No more sewing until next year I think (except for the rest of those shopping bags I was going to make for Christmas, darn it!)

So there's no knitting finished objects to show in this post :-( I'm still half done on that third pair of socks for T. I'll finish them next week for sure, then I can move on to other pairs. Yay! And maybe for a little variation, a hat or some wrist warmers for me :-)

As mentioned before, I have managed to get some washing done, so here is a couple of weeks worth of Laundry Lottery winnings: 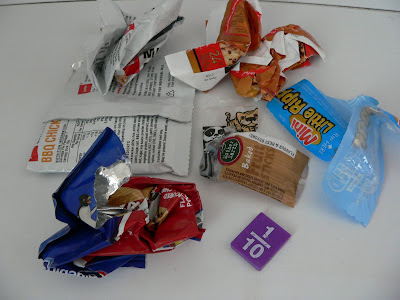 Just the standard food wrappers/packets, and a random piece of maths equipment, presumably picked up at school at some point and forgotten about.

So what else has been happening? Not much... I officially resigned as Minute taker for the school Board of Trustees. Oddly though, I don't really feel any sense of relief. There's only one kindy Committee meeting left for the year, so perhaps I'll feel a little better once that's over. Although as far as I know, they still haven't found a replacement, so that could be a bit of a problem...

Only PTA and Guild Committee left, and work. Doesn't sound like much, but over the last month or so it's felt like a lot more. My brain appears to be returning to normal (or at least as normal as my brain can be). In other words, I'm not forgetting absolutely everything like I was a couple of weeks ago. Maybe all that sewing has had something to do with it - basic, monotonous, repetitive tasks? Hmmm...

Less than two weeks until X turns seven, and less than a month until T turns five. Must get on to organising something for these important events! X not so much, but T deserves a celebration - he's going to be five!!! Wow :-)

I've managed to keep up with my running too, which is going fairly okay. I'm no longer driving out to Karori Park for my runs, I've joined the posers that run along the waterfront ;^) a) I'm no longer embarrassed about my lack of fitness and inability to run for any length of time (because now I am reasonably fit, and I can run for a decent amount of time), b) it's much closer to home, and c) the view is nicer. Although yesterday's run was cut short, because it was blowing a gale. I kept getting blown sideways, or had to stop and walk because the headwind was too strong and walking was actually faster. I kept getting hit with seaspray as well, and in the end I just gave up. I still ran for about 20 minutes though, so it wasn't all bad. The weather is getting warmer so I'm now in running shorts instead of baggy trackpants. I hope I'm not blinding people with the almost transparent whiteness of my legs, which haven't had a tan since early high school :-)

I've nearly finished the book for book group, The Memory of Running by Ron McLarty. On the front cover is a quote by New Woman (presumably a magazine) that reads "This is one of those beautiful books you're going to nag your friends to read" -- not so much. Sure it's an okay book, but nothing spectacular. Although to be fair I still have about 1/4 left to go, maybe it'll have a really good ending...

I'm horribly behind on the Ravelry Harry Potter RAL - I have about six or eight chapters of Chamber of Secrets to catch up on. Although it looks as though everyone's lost interest, as nobody appears to be participating in any discussion on these chapters, so no biggie. I'll get around to it eventually. X and I have two chapters left of Deathly Hallows before we've finished the entire series, I'm pretty sure X can't wait until it's over - I don't know how much he actually listens to the story. Oh well, it gave me an excuse to read the books again! Once I've finished Deathly Hallows and The Memory of Running, I'll start on An Echo in the Bone, the latest Diana Gabaldon that is sitting on my bookshelf waiting to be read. Can't wait! It's been a while since I finished A Breath of Snow and Ashes. I always recommend these books to people - they're really good. Hmm, after that it must be about time for another Terry Pratchett... ahh, so many books to read, so little time!

So to end this post on a slightly brighter note, here is my list of "Things To Look Forward To" (in no particular order):

1. Vodafone Christmas Party - which involves flights to and from Auckland, leaving the boys behind in Wellington with my mum. A whole evening and morning kid-free!

2. The New Moon movie, due out on 19th November (squeeeee)

5. Trip to Napier in early December to visit my bestie Tans and go to New Moon together

8. The last book group meeting of the year - book group is always a laugh-fest

9. End of year Christmas parties (other than Vodafone)

10. Lots of good books yet to be read (and some good books re-read just because)

15. Lots of beautiful things to see every day, like the sparrow that decided to visit me in the lounge this morning (and poo on my dining table), pretty flowers that the Board of Trustees gave to the PTA members to say thanks (currently sitting on my coffee table), little lizards on the footpath, gorgeous blue skies that go on forever, my desktop wallpaper with the topless picture of Jacob Black from Twilight (mmmmmmm - yummy)... the list goes on.