Yay, it's over! On with life

Phew! I finished all my sewing in time! All 70 hearts done in time to take to school on Thursday afternoon, costumes finished in time for the weekend Christmas party in Auckland. I ended up sewing on the domes, not Deane (no surprises there!) Although I did have a bit of an 'oops' moment. I'd marked out exactly where to sew the 12 domes, and did one side, put it on Deane and marked where the other half of these 12 domes would need to be placed in order for the robe to close properly. I then proceeded to sew them on (while watching Twilight - Deane didn't say anything about it, maybe he was just happy he didn't have to do it). My 'oops' moment came when I'd finished sewing on the other halves, and went to try it on Deane, only to find that I'd sewn the other halves on backwards, so the domes couldn't close. So what did that mean? I had to take them all off and do it again :-( Oh well, that allowed me to watch pretty much the whole movie without interruption. I think Deane felt sorry for me so he let me watch the rest of it in peace, before we went to bed for the night. My dear sewing machine is all packed away again, and who knows when it will have it's next outing?

Mum arrived at around 2pm on Friday afternoon, so we all went to pick up X from school. Called in to the supermarket to get a chicken for dinner, home to bung it in the oven, and sat around for a lazy afternoon. That night, mum and I watched a movie - can you guess what it was??? Yep, Twilight again! Mum hadn't seen it, so of course I had to make her watch it :-) Oddly, Deane still didn't say anything...

Saturday morning dawned with fairly decent weather so I headed off for an early morning run along the waterfront, and was back before 7.30am. Quick shower and boys ready, before the special effects makeup lady came to do Deane's Voldemort makeup for the party at 9.30am. Here are some progress pics for you: 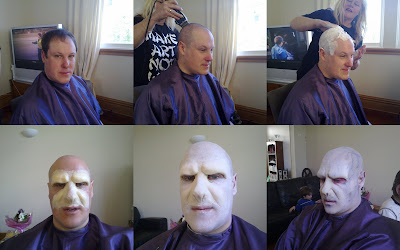 All done just in time for the taxi to pick us up at 12.30pm to take us to the airport. Yes, Deane had to fly to Auckland looking like that (in muggle clothing of course) - it was hilarious!! Oh, the looks we got!! And several (hundred) more while we wandered around Queen Street in central Auckland getting last minute bits and pieces, and some dinner before getting dressed and heading to the party which started at 7.30pm. Lots of photo opportunities with random strangers walking down the street. Here are a couple of pics of us - please bear in mind we took these at about midnight after we'd got back to the hotel, so I look like crap and can't strike a pose to save my life: 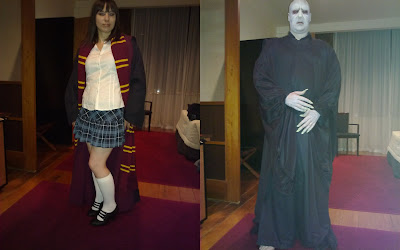 ::How is it that you can look perfectly fine in real life, but absolute shite in a photo? I don't get it!::

The party was pretty awesome, held at The Civic in Auckland. There were six separate bar areas - a King's Room where you could get 'beheaded' or 'knighted', a Children's Story Room where you could sit on toadstools with the white rabbit downing shots, a Rock & Roll room where (oddly enough) you could have a game of table tennis, a 60's dance room, and a couple of others that I didn't really see. The costumes were varied, ranging from punk, Ginger Spice, a telephone box, Thomas the Tank Engine, British Guard, royalty, Alice in Wonderland, and war heroes, to Ali G, Vyvyan from the Young Ones, polo players, Essex nightclubbers, Lewis Hamilton and Andy from Little Britain.

We wandered back to the hotel around midnight because I was wiped. Deane removed all the makeup and went out again, getting back to the hotel about 4am. I happily went to bed and straight to sleep. The next morning I enjoyed the view for a couple of hours: 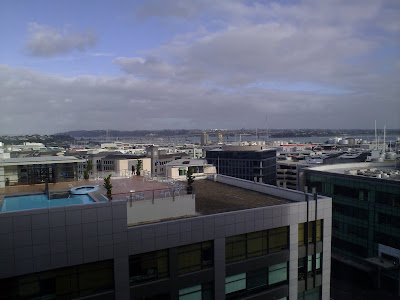 Then woke Deane up so we could check out and scoff ridiculously large amounts of yummy breakfast before the shuttle arrived to take us back to the airport. We arrived home at about 12.30pm with a large box of Dunkin' Donuts in tow (mmmmmmm, donuts...) mum went home, and we went to watch the Wellington Phoenix play Perth at the Westpac Stadium. It was a 1-1 draw. I've never actually been to a football game before, and must say it was rather entertaining. I gather the standard chants I heard from the crowd were gleaned from the Brits - things like "All we want is a decent referee" sung to the tune of Yellow Submarine, "Who are ya?" yelled over and over while pointing at the grounds, "The referee's a wanker"... you get the idea. Of course that's just my assumption. Footy crowds are definitely more vocal than rugby crowds in any case ;-) Oh yeah, and the kids got their faces painted, coincidentally, by the same lady that did Deane's makeup the day before: 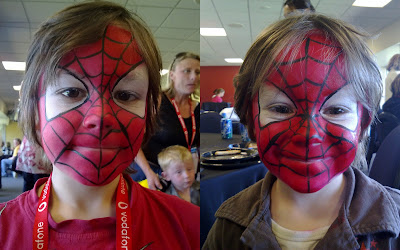 Guess the popular superhero of the day ;-)

T had his first school visit on Monday, which I think went fairly well. X has finally found his Nintendo DS (it's been missing for about four months!!). I've started reading An Echo in the Bone by Diana Gabaldon, and am yet to finish that third pair of socks for T. All in good time... (but hopefully before Christmas! Better get cracking).

How was your weekend?
Posted by kreachr at 13:52