Yesterday, I had my kids decorate the Christmas tree in their usual boyish fashion. It was a rare moment when the weather was shite so they were inside, the TV and XBox were off, and no computer games were in play. It was pretty quiet, and T started singing. It was so damned cute, I just had to get a video:

OK, my video-taking skills suck more than my photography skills. I'm prepared to admit that. But still - how cute? Seriously!! My gorgeous boys :-) So as you can see, our Christmas tree as looking as stylish as ever (heh heh). Soon I'll start wrapping the completed hand made pressies (and others that I'll buy over the next couple of weeks) and put them around the base, waiting for the trip up to Napier for the big day. The boys socks are done and I'm halfway through dad's socks - here's one: 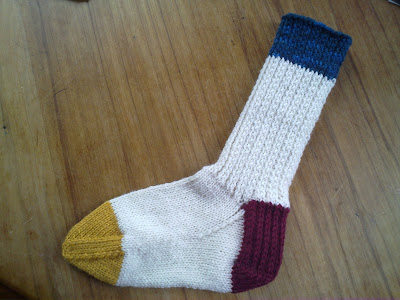 I quite like how it's come up, but I have no idea if dad will actually wear them. Pity they're too big for me :-( otherwise I'd probably keep them ;-) I've started on the next one - they're fairly quick to knit since they're knit in worsted weight yarn. Can't complain about that!! I'm trying to stick to one (knitting) project at a time and get it finished before moving on to the next. Some people might be getting knitting IOU's still...

I've also got some sewing projects to finish, and a couple other bits and pieces, plus the shopping (of course!! What would Christmas be without a little shopping?) I did a bit of finance-free shopping the other day while the boys were at school - you know the kind, when you wander around the shops and pick out what you'd like to buy everyone, keep a mental note, then edit the list over the next few days while you wait for your money to miraculously appear in your bank account. It's a good way to go, and over the years I've saved myself hundreds, nay, thousands of dollars in impulse buys. I've decided what to buy Deane this year - I hope he likes it. I know he didn't like last year's yuletide gift...

Anyway, enough Christmassy fluff for now. I recently received the second batch of Ron Weasley blanket squares for the round four swap: 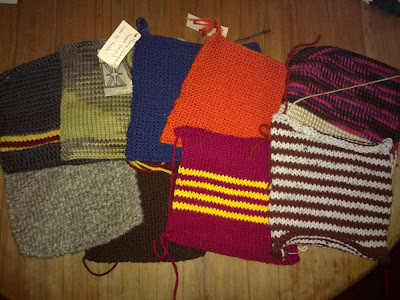 Aren't they cool? I'm very pleased with this lot. I've already signed up for round five (due in February) and can't wait to see what people come up with this time. It's gonna be an awesome blanket! Oh, and I don't think I ever posted a pic of my completed Felicity hat - aka my floppy hat. Here's a wee pic of T modelling it for me (and I stand by my previous lament that taking a photo of yourself is nigh on impossible): 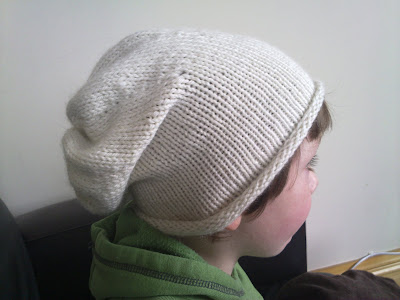 I like it, it's comfy to wear, and it looks pretty cool on. Well, at least I think it does...

Well, that pretty much covers all crafty projects at the moment. Both boys are at school now - T is going really well, no problems at all so far. Although I did pick them up at 1.45pm this afternoon - they skipped sports because T was really tired and I thought he'd have a meltdown if he had to walk to the park, run around for 45 minutes, and walk back to school. He's not the most energetic of children, and baulks at walking down the street!! But he slotted into class like he'd been there for ages, and I had no qualms about leaving at 9am and returning at 3pm. Granted, I checked up at about 11.30am the first day, and a couple times today (because he was so tired) but he's been doing great. One more school day left before the weekend, and then he can have a well deserved rest. Should be a pretty quiet weekend for him and Deane, as X and I will be heading up to Napier again. I'll be going to New Moon with Tans - looking forward to all the yummy shirtless young men strutting their stuff on the big screen, ooh it's gonna be good!!

After that, the drive back home on Sunday to prepare for the last two weeks of school before Christmas holidays start for the boys (last day is 18th December). Hopefully Deane's won't be far behind, and the relaxation can begin in earnest.

I'd love to experience the classic 'white Christmas' (then the traditional turkey dinner that Deane and his mother insist on will make far more sense), but nothing really beats a summer Christmas where you can laze around in the sun drinking a few cold ones, and feast on some good ol' kiwi barbeque tucker. Beach trip, anyone?

Must admit though, I like the fact that our little family unit can have the best of both worlds (minus the chilly temperatures of course). Barbeque at mum and dad's, then on to the turkey dinner with ridiculously large amounts of food and people. Who needs more than two giant meals on Christmas day, interspersed with a few alcoholic beverages? And the presents of course ;-) Bring it on!!
Posted by kreachr at 19:41