The silly season is upon us, and things have gotten a little crazy here. It recently occurred to me that it had been a while since I updated my blog - over two weeks in fact... oops. Well, there's lots to tell, so I'll get started.

Running
Has been going okay - I try to get in at least three runs per week, but when the stupid winds pick up, it's kinda hard. There's nothing worse than running into a head wind, then having a big gust knock you backwards. I usually have to stop running and walk for a bit, because it's actually faster, and way easier. If it's really windy, I either cut my run short, or don't go out at all. I feel good about the fact that I can still run 5k without too much problem though. This summer certainly hasn't been the best so far, with cold days, lots of wind, a stupid amount of rain (probably more than we had in winter!!). However, I don't mind running on the occasional day we have like this: 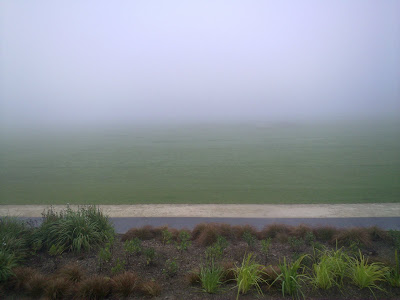 I alternate between the waterfront and Karori Park, just so I don't get bored. The waterfront isn't particularly accurate distance-wise - I'm guessing it's about 3.5-4 kilometres, since it takes me about 20 minutes or so. If I want to do a definite 5k run I go to the park, because the track is marked out. And it always takes me 30 minutes exactly. Seems like it's a good place to go for a 'proper' run.

Boys
They've finished school for the year, as of yesterday at 12pm. T is really enjoying school, and the boys get on well together in class and on the playground. Yesterday X moved from Kauri (the Year 0-2 class) on to Kowhai (Years 3-5). They have a special 'through the arches' ceremony for children moving up to the next class (ah, the joys of a small school). So anyway, X and the other children moving up were told to get their tote trays ready to carry through to Kowhai, and the younger children were asked to form an archway for the older kids to walk through. X when to get his tote tray, and T followed along to get his. After being told by X and a couple of the other kids that he couldn't go through and would have to stay in Kauri, he got really upset, started crying and went and hid under a table. Poor thing! Wanted to stay with his brother :-( So after a cuddle he was okay enough to watch the wee ceremony (but not participate in creating the arch, I think that would've been too much for him), and he managed to finish of the last half hour of school in reasonably high spirits. Afterwards during the car ride home, X proceeded to tell me that that was the best day of his life so far - he was really proud of the fact that he had moved on to Kowhai. Awwwwwwwwww (^_^)

This morning I caught a bit of discussion going on between them with regards to school next year:

X: I'm going to be in a different class next year T - I'll be in Kowhai and you'll be in Kauri. But we can still play together at play time.

How cute!! It's good to know they're only terrors when they're at home, and can act in a civilised manner when out in public :-) School together seems to be working well for them.

Knitting
It's been going slowly, but getting there. I think I might manage to finish all the originally planned Christmas knits in time (fingers crossed). I had planned a few extras but I don't think they'll get done. Oh well... I have one project left to finish off, and I'm about 1/4 done, but knowing that I still have a week to finish it is kind of reasurring, especially since I have knitting group tomorrow afternoon, and plenty of time next week.

I have lots of stuff planned for next year as well - a pair of socks for KJ, who has been waiting ever so patiently for them, and a pair of Bella Mittens (Twilight inspired). I was given some gorgeous merino/silk yarn for a cowl in a swap, and I've been wanting to knit with it for a while, so I might get around to that. There's another couple of items I want to knit (one medium-sized, one rather large!!) that I won't go into detail about, because they're for a couple of rather special people.

Sewing
My dear sewing machine did get a couple more outings, and I no longer resent it :-) The shopping bags got finished, I completed the present I've been making my niece for about eight months on and off: 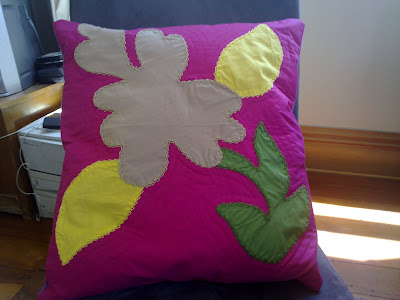 Background story: My friend KJ gave me this tivaevae block to do, because I'd mentioned that I wanted to learn needleturn applique. What better to practice on than a tivaevae block? So I got a book out of the library, learned needleturn, then had a completed block, and nothing to do with it. Since it was 'practice' I hadn't bothered to get matching thread colours, which meant they were slightly visible (and only slightly because I'd done such a good job of the needleturn, if I do say so myself!) but I wanted to make a cushion out of the block so decided to embroider around the pattern. My friend Suzy taught me how to embroider the feather stitch, which goes all the way around the outside of each of the leaves, stem and flower, then I shadow quilted around it three times, put a back on, and stuffed it. Voila, cushion!!

And I even had time to make these cute little project bags, which I gave to each of my stitching friends (and one for me of course!): 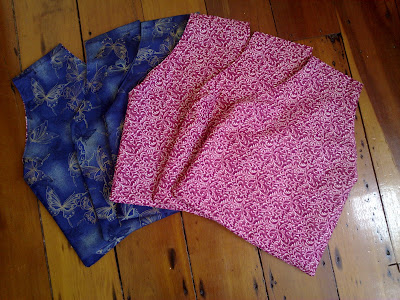 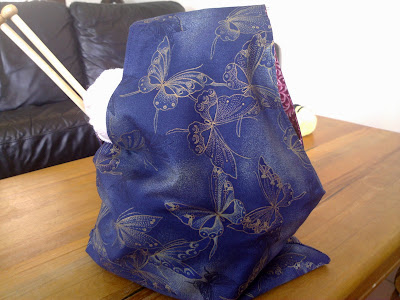 I have a large quilting project planned for next year (and probably another couple of years after that!!) but it will require a fairly decent sum of money as I have to order said project from the US, and it's HUGE, but I've been wanting to do it for a while. I won't say any more just now though, it may end up a surprise for another special someone (if I can part with it once completed). Wow, it's good to know I have so many great people in my life that I want to make things for. However I really have no idea if they actually like the stuff I make... ;-)

Spinning
Has been put on the back burner for now, but I'll definitely be getting back in to it soon. I've got my Ashford Traditional wheel out of storage - finally! - and want to get it going. It needs a little TLC (wax, oil, replacement parts, the whole nine yards!) but I'm sure she'll be fine. I still have my Pretty Lush roving from Maude&Me that I really want to spin up, so perhaps early next year...

Christmas Shopping
Is nearly all done, just a few more bits and pieces to get. I can probably do that today, which will mean minimum stress next week leading up to Christmas. I love being organised!! We're heading up to Napier next Wednesday, which will give me time to work on the desserts for after the big turkey dinner. This year I'm going with a yummy looking berry trifle and a pavlova (and Gran's coffee pudding that Deane insists on having). Last year's desserts were well received - traditional plum pudding with brandy butter, and cherry mascarpone tartlets (oh, they were gooooooood!!) so I'll try something a little different this time - hope everyone likes them :-)

Well, I probably won't get around to posting another update until 2010, so have a great holiday everyone!! See you next year :-)
Posted by kreachr at 09:21