I'm sorry, this is only going to be about me

Knitting
Is going well - must be all this time I'm spending at home while the boys entertain themselves :-)

I finished 'KJ's Commission' - a pair of socks in the Blackrose pattern. I'm not really sure why it's called that, but oh well. They look nice anyway :-) 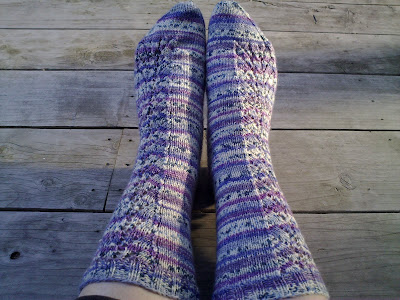 As I said before, the pattern would have stood out more with a solid or semi-solid yarn, but I think they look fine. Hopefully KJ will like them - they should fit, the woman gave me umpteen-million different foot measurements!!

I've nearly finished the 6th square for the Ron Weasley Blanket Swap, so I'm on track to get 9-10 squares completed by the 5th February. Here are the ones I've made so far: 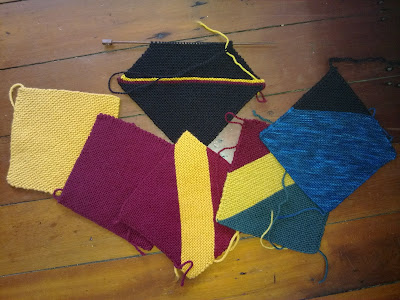 I'm using up a lot of my scraps of yarn, which I guess is the point. Although I don't think I can get away with using my sock yarn scraps...

I'm also nearly halfway through a secret gift - will post pics once the gift has gone to the intended recipient. Not sure if said recipient actually reads this blog regularly enough for me to worry about it, but better safe than sorry. It's knitting up really quickly though - I only started it on Wednesday afternoon! Should be finished by mid next week. Which means I can move on to other stuff!! Lots to do :-)

Other Crafty Stuff
My special long-awaited thingee arrived from the US earlier this week, and is now in 'phase two'. I'm leaning heavily towards keeping this project for myself, so you may yet see pictures and get more details soon. Decisions, decisions!

I also received this week a special parcel - the NZ Yarn Sampler Box. Here's a pic of what I received in my box: 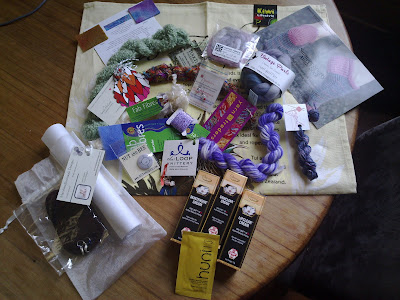 Quite a range!! There's some neat little samples in there - my faves are the Vintage Purls fibre, the Marshmellow Magic crochet booties set (with crochet stitch markers - yay! I needed some of those), the NZ tea towel, and this really cool sample of recycled sari silk yarn by Yarn Traders - although I have absolutely no idea what I'll do with it. I'm a little bummed that I missed out on some of the other good stuff, like Grrrl Shaped Yarns and Needle Food (although I don't really need more Needle Food), and I would've liked a Vintage Purls yarn sample, but oh well. The down side to this is that the samples are quite small (the yarn samples or fibre samples are about 20g, except for the sari silk yarn which is 25g) so it's going to be a challenge finding what to do with them. Some of the samples are ridiculously small and you really couldn't do anything with them! I'm glad I got the sampler box, but I don't think I'll do it again.

I've been a wee bit naughty and signed up for the next Needle Food Sock Club, even though I still haven't knit up any of the last three skeins from the other Sock Club. But as I told Deane, sock yarn doesn't go off, so it doesn't matter if it sits there for a while. It'll get used eventually ;-)

Books
I've always thought I read quite a bit, and I think Deane would agree. I don't however think I read too much. Perhaps Deane would not agree. Anyway, I've decided to keep track of how many books I read this year, just to get an idea. So far I've only finished An Echo in the Bone by Diana Gabaldon. Although I am currently reading Harry Potter and the Prisoner of Azkaban by J K Rowling (for the Harry Potter RAL on Ravelry) and The Host by Stephenie Meyer, just to see if her adult fiction is anything like her young adult fiction. People (who don't like the Twilight series) seem to think she might be a 'one hit wonder' kinda author (although technically there's four books, so I'm not sure what the term would be here) - I'm curious. So far it's kinda interesting...

Laundry Lottery
Has been sadly lacking, I guess due to the fact that the boys are at home, and don't have anything to shove in their pockets. Probably a good thing.

Well, that's probably enough about me for now, although I do have some good news (for me!) - Deane and I will be heading to Thailand in March for a two week holiday. YAY!!! He's been going on about taking a holiday overseas for a while now, and had pretty much decided on Thailand, but I said I wouldn't believe him until he'd booked the flights. So he went and booked the flights. Good man!
Posted by kreachr at 11:21