From the mouths of babes

Or in my case, my 5 and 7 year old boys. The other day I was sitting on the couch knitting a sock. The horrors were playing Lego Indiana Jones on the XBox. With one ear on their rambling conversation, I noticed T talking about the camels in the game. But the word 'camel' sounded a bit odd, not quite right.

Later on the same day I thought their good behaviour warranted a wee treat, so I got a bar of chocolate out of the fridge. T piped up, "is it caramel?". Hmmm, that sounded the same as when he was talking about the camels in the game earlier...

There is another one that X often says that Deane and I have a quiet giggle about every time we hear it. Whenever he asks to look at a website on the internet, he starts it with "wub wub wub". It just sounds so cute and funny, we don't have the heart to correct him :-)

There have been many others, but as the boys grow up, they slowly learn the correct pronunciation. It's sad in a way. I'm going to miss all the funny little words they come up with.

They're off to school on Friday (two more sleeps!!) - everyone is looking forward to it. All their books are covered, labelled, and packed in their schoolbags with their pencil cases full of new felt pens and coloured pencils. Everything is organised and ready to go - woohoo!! Blissful, quiet days are on their merry way.

Which will mean getting back into running, and more knitting and housework time. I'm really starting to miss going for a run in the mornings, so it'll be nice to get back into it. Knitting hasn't suffered too much in all fairness, I've still managed to get quite a bit done during the school holidays.

I finished my special secret project with plenty of time to spare, but you'll just have to wait for a peek at that one. I whipped up these cute little cabled wrist warmers in a couple of days using a skein of Peruvian yarn given to me last year by one of the angels in the Harry Potter swap. They're so soft and cosy, I can't wait until winter so I can actually wear them! 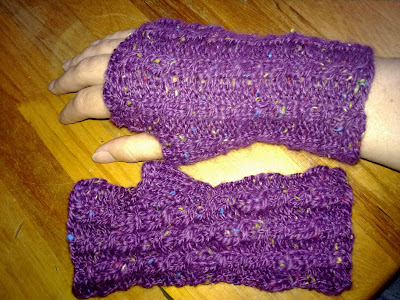 Currently on the needles is a pair of socks for me, in the Needle Food sock club #2 colourway Midnight Feast. Ooh, it's pretty!! The pattern is really cool too - Viking Socks :-)

Here's a pic of the front cable: 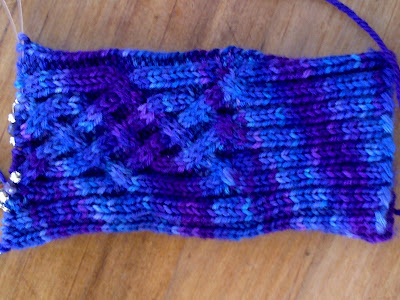 and the back cable: 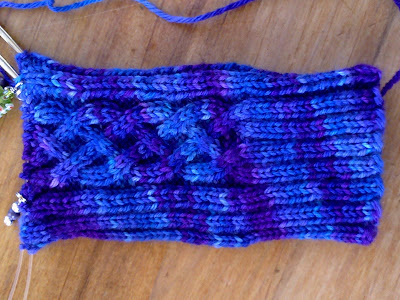 I'm a little bit further along than this now - just past the heel, and onto the foot. These are being knit one at a time because the cables require a bit of concentration, and they're different on each sock (cables twist in opposite directions) so I thought it would be safer that way. Cables are not fun to tink back!!

Also on the needles is my mmmmmmmmalabrigo lace scarf (oh, such divine yarn!!). I only started this morning, and have done only one pattern repeat so far. It's an easy pattern to memorise, but it's going to be a long process. Still, no hurry (the benefit of making stuff for yourself). I'll post a progress pic a little later on, when there's more to show.

Went and visited a new yarn store the other day - well, the store is new, but the owner has had a website for some time - Knitting Pretty. She stocks quite a range of sock yarns (and other yarns of course) - I just had to get a ball of TOFUtsies - it's a blend of 50% superwash wool, 25% soysilk fibres, 22.5% cotton and 2.5% chitin, which is made from shrimp and crab shells, and is naturally antibacterial. Not that I have a problem with smelly feet... But apparently it's also good for people with poor circulation. I always have cold feet in winter, so I guess I'll be testing that theory ;-) I decided to get a solid colour for a change (sock yarn is almost always variegated or semi-solid) - lime green!! Should make for an interesting pair of socks.