It's a stupid idea. I hate it. Especially when you have to do nearly everything all by yourself. In a week. Stupid!

The move is over however, and we're settled into the new place (mostly). I did have a wonderful day yesterday waiting patiently for the Mr. Rental people to drop off the microwave we're going to be using for the next couple of months. They were supposed to be here at 1pm. They called around 12 to advise that they were running late, and would instead be here at 2pm. They called again at 2pm to say they'd try their best to be here before 2.30. At 2.15 they finally showed up, wandered on in with the microwave, and that's when I realised I'd forgotten to go and get some cash out to pay for it. So out they went, microwave in hand, and promised to be back at 3.30pm. I'm such a dick! Neeedless to say, I left straight away, got some cash out, picked the boys up from school, bribed them with chocolate to walk a little faster, and got back home with 10 minutes to spare. Yay, we now have a microwave. That wonderful invention that sits there waiting patiently for you to need food heated, or milk warmed for childrens milos.

We're getting used to the place already. I'm overjoyed that this place has not only a garage to store our stuff (of which we have far too much), it has a driveway! With parking space!! Bless :-) The two sets of stairs between the three levels is helping me keep fit (and making me feel less guilty about not running at the moment). I've figured out that if you push on the toilet cistern in the exact right place, it stops the water from running continuously, allowing me to sleep without the bathroom and bedroom doors closed (not to mention saving water). I've also figured out that if I lean on the front of the washing machine, it will complete a full spin cycle without throwing its toys out of the cot and bleeping at me. This gives me time to read a chapter or two of my book. Unfortunately, we do not have a clothes line. Oh well, nothing's perfect ;-) 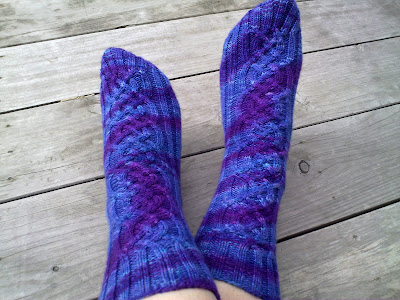 I've (nearly) finished one of my Skewed Wet Peacocks, which by the way, are the most amazingly bizarre and fascinating sock constructions ever designed. 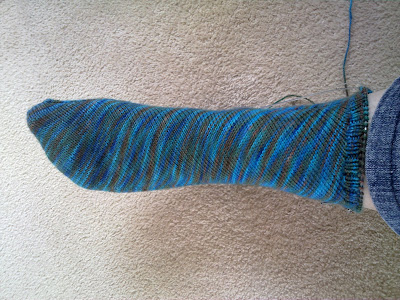 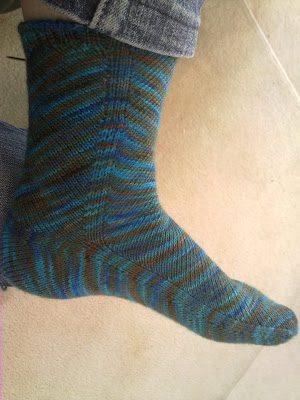 (Seriously though, how weird are they!?!)

I haven't got any further on my lace scarf, but I have knit a wee baby hat for my landlady who is due to have a girl on the 1st April (fingers crossed the poor child doesn't actually arrive on that date!). I'm also going to knit a wee pair of socks. Of course. Just because they're so darn cute :-) Pics to come later.

Anyway, I have to get moving, I've got to go to my pedicure appointment in 20 minutes. Yes, I know, a pedicure!! Just so you know, I'm only getting it done because it's a freebie (Christmas pressie), and I'm balancing out the girlishness by wearing a naff t-shirt, my favourite pair of scruffy jeans, and my Chucks. Don't want to go overboard here ;-)
Posted by kreachr at 11:00