Life as a housewife dull? Never!!

This past weekend would be proof of that. Saturday morning I met up with my friend Jen and her man Lee for a coffee at Mojo Bond Street, one of our favourite coffee places. Mmm, they make good coffee. Anyway, got home in time to take T to swimming. We have a bath in our new place, and he's been doing really well at holding his breath under water and putting his whole head in, so we were hoping the hysterics at swimming would cease, and the poor instructor's ears would get a break. Maybe then they could actually get down to some swimming!! Deane's been taking him and things weren't going too well so I thought maybe if I took him he'd behave. We're not far from swimming now, just a ten minute walk, so walk we did. I left in a hurry and didn't put any shoes on him, so I decided to carry him. Silly idea. Pulled a muscle in my back - again (yes, same one as every other time. You'd think I would've learned my lesson!!) Still had to get him to swimming on time so just kept walking, although shifted him to piggy back half way because he was just too heavy. On arriving I realised I'd completely forgotten to bring his swimming bag. Duh!! So had to get Deane to drop it off. Luckily T was ready right on time and lo and behold, the lesson went without a hitch. Yay!

After swimming we all jumped in the car and headed out to buy a new TV - the 42" rear projection one we bought second-hand when we moved to Wellington was just getting too crappy - I found myself squinting at the screen during the weather forecasts in order to read the temperatures. Not good! Bad for eyesight, and would create unsightly wrinkles if continued. So after shopping around a bit, we scored a good deal on a TV that had been purchased but returned in new condition, sans packaging. Also got a Freeview decoder for half price. Can't complain :-)

Off home we went, where I quickly discovered that the garage (where we're storing all our furniture) had been completely flooded by the washing machine, because the faulty pump (which had been 'fixed' by the plumber earlier in the week) had failed to do its job. Deane was aware of this, as it had happened before he left to drop off T's swimming bag. He just forgot to tell me. Awesome.

So I didn't get to lie down and rest my back. No! I had to help drag all the furniture out of the garage and mop up all the excess water. Ah, good times.

On to Sunday. Thankfully a slightly more restful day - knitting at the Botanic Gardens, with a twist. I met these guys - you may recognise them: 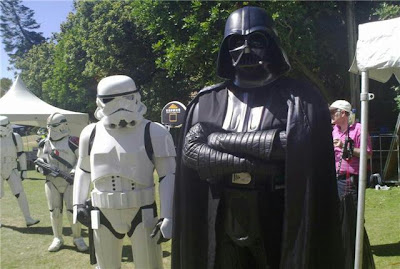 Of course I had to take a photo so I could tell my boys all about it :-) They were so jealous!! The rest of Sunday was spent checking out all the kooks on www.peopleofwalmart.com - priceless! I highly recommend you take a peek, it's people-watching at its best, without even having to leave home.

Excitement is building here, as Deane and I leave for our two week trip to Thailand in a week (wow, that time really flew by!!) although the kids are a little less excited, since they have to stay here and go to school. They are however looking forward to seeing their nana and aunty, who will be making sure they get to school and don't starve to death while we're away :-) I don't hold out much hope for homework getting done though...

I've already checked with the airline about knitting needles on board the plane. I've even printed out the email reply I got just in case they pull me up on it at security. I'll be purchasing a set of bamboo circulars specially for the trip, so I can knit my malabrigo lace scarf. The flight may get boring otherwise, and we can't have that!

Speaking of knitting, I have a few projects on the go at the moment. Seems I can't settle on just one. Which unfortunately means that none of them are actually getting finished. There's my 'Skewed Wet Peacocks', the aforementioned malabrigo lace scarf, a scarf I'm making for the Round #5 Ravelry Scarf Exchange (so it's all 'hush hush' at the moment, but pics will follow once the scarf is received), and last night I cast on for a pair of Bella's Mittens. From Twilight :-) Love them. Don't know if it'll ever get cold enough here to wear them, but I can always hope.

Oh, and because I promised, here is a pic of the scarf I made a little while ago but couldn't show you just in case it got seen by the recipient: 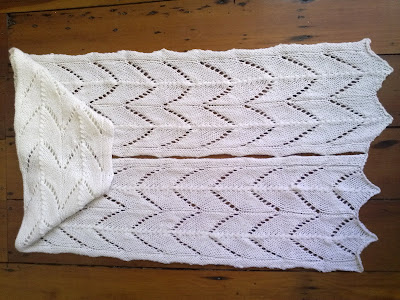 Rosalie Hale's Scarf (again, Twilight) made for my bestest friend Tania for her 30th birthday. She's a fellow fan, and mentioned when she was here last year for my 30th that she really liked the scarf, and would like one. So I made one :-) Really easy to knit, quite a quick project (bless you worsted yarn!!) and looks awesome, or at least I think so ;-P 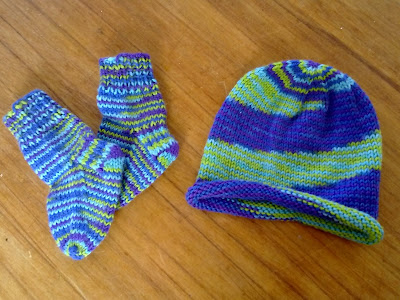 Ooh, and one more thing I feel the need to share - the place we've moved in to has a few visitors on the odd occasion. I'm wondering if they're trying to desensitise me before our trip... 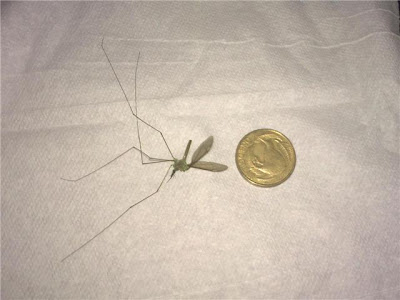 Seriously, how ridiculously big is that blood sucker??? Ewwwwwwww!! (fyi, a $1 coin is approximately 2cm in diameter, ergo, mozzie body is nearly 2cm long - urgh!)
Posted by kreachr at 12:15