Wow, I've been slack! Someone was kind enough to give me a little nudge the other day, reminding me I hadn't updated my blog for over two weeks. Thanks Helen ;-)

Gosh, where did I leave off last post?? One moment please, I shall check...

Oh yeah, okay, so now we're heading back to Bangkok. Unfortunately the trip back was in a van full of other people, also heading back to Bangkok. I preferred having a private car, but oh well. We arrived at the hotel in the afternoon and pretty much bummed around for the rest of the day. This time we were right in the city so markets, malls and food stalls were right nearby.

The next day we were picked up at 7am for a full-day trip consisting of the floating markets, the bridge on the River Kwai, and the Tiger Temple. It was about two hours from the hotel to our first stop, the floating markets. I hadn't realised at the time that everything we were visiting was in and around Kanchanaburi, so I was wondering why the trip was taking so long - maybe I should pay more attention when booking things.

Anyway, the floating market was kinda cool - you get in a boat taxi which takes you around the canals to where the market is held. 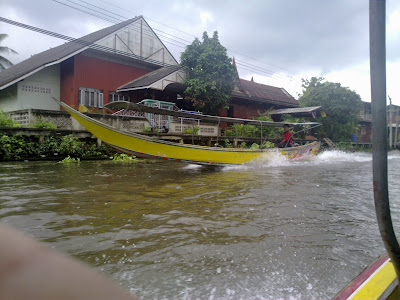 The market itself is quite varied - there's stuff in boats, stuff on shelves next to the canals, and there's also areas where you get off the boats and walk around in buildings. The market covers quite a large area, even crossing a road. 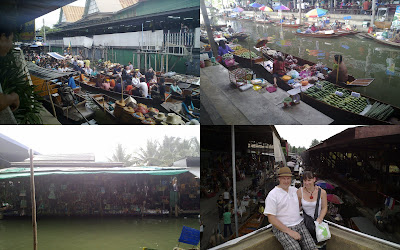 We didn't buy too much at the market, knowing we'd be getting in and out of a van all day. After the market, we piled back into the van and headed out to the River Kwai, with a quick stop at an elephant village, so a couple in our van could do the half hour ride. Not sure why it was essential, as they're from India and have been on elephants before, but oh well. Gave us a chance to stand around in the sun on a hot day for 30 minutes...

So I can now say that I have been on the bridge over the River Kwai. Here's some proof: 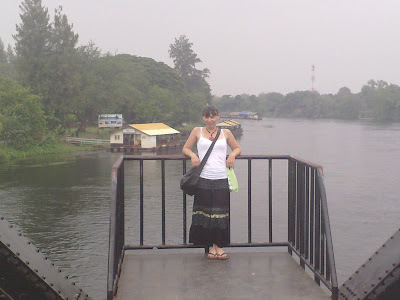 And just so you know, this is what the bridge actually looks like: 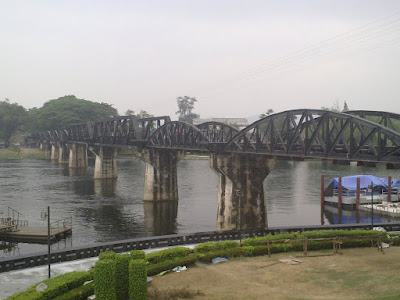 That was quite a depressing part of the trip - there was a glass tomb in the museum that held the bodies of 106 prisoners of war, killed while building the bridge. Humans - we can be so evil.

On a slightly brighter note, our next stop before heading back to Bangkok was the Tiger Temple - this is a large animal sanctuary, with a Buddhist temple on site. It started out as just the temple, but the monk slowly accumulated various breeds of animals over time. Some were brought to him injured, saved from death, others just turned up with families in tow. Now there's hundreds of animals, including a large number of tigers (who are now breeding quite happily, yay for them!) We got pretty 'up close and personal' with the tigers, as is custom when sightseeing. Ugh, we were such tourists... 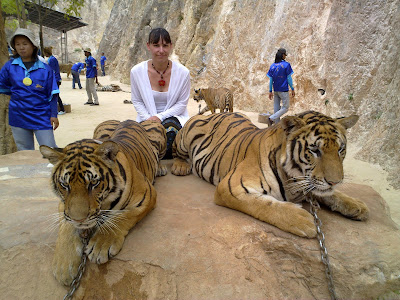 After that, we headed back to the hotel. Over the course of the day we'd got further and further away, so the drive back took three hours. So it was just a quick dinner and lazing in bed watching movies.

Next day was spent wandering around the malls and markets of inner-city Bangkok (exactly where all the riots and troubles with the red-shirt protesters has been happening over the last couple of weeks - guess we left just in time!!)

On the Saturday, we spent the entire day at Chatuchak market, the biggest market in Thailand. It. Was. Huge!!! We spent all day wandering round what was probably about a quarter of it. Got incredibly lost (although still managed to find our way back to where we started, and find a couple of stalls we wanted to go back to). Spent ridiculous amounts of money and got lots of souvenirs for friends and family, and of course a few bits and pieces for ourselves. I was so glad to get back to the hotel, it was a really hot, sunny day and we'd gone all day without a Seven-Eleven to duck into for air-conditioning relief. That evening we went to Muay-Thai boxing. Deane insisted. It was okay, but not really my cup of tea. The most entertaining part was the 'band'. Deane and I had quite a few laughs about one particular band member, who looked ready to kill himself most of the time, but would quite happily watch a good-looking woman walk from one side of the stadium to the other, or would have a ridiculous grin on his face when somebody was getting pulverised in the ring (not as regularly-occurring as you'd think. Yeah, it was pretty boring).

On our last full day in Thailand, we visited a few of the temples. There are literally hundreds dotted around all over the place, but I think three was plenty. My favourite would have to be the reclining buddha. Huge!!!!! Here's a picture that will give you an idea of scale: 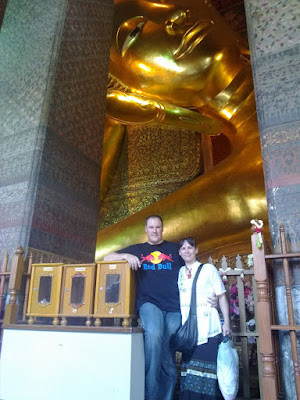 And another one, just in case you didn't quite catch that: 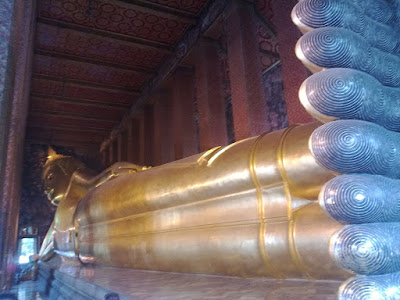 That evening we had dinner in the hotel restaurant, simply because we hadn't actually done that for the entire trip - we'd always eaten out. We were entertained by the in-house band (consisting of two people) who took requests, and allowed guests to sing karaoke. No, we didn't ;-)

On the 29th before having to leave for the airport, I had a manicure and pedicure done, costing a grand total of 250 baht (about NZ$11-$12). We did our absolute last-minute shopping for things we missed, and spent a little bit too much so that we had to short-change our taxi driver taking us to the airport. Don't worry, he knew how much we were going to pay him before he accepted the fare :-) We didn't want to have to withdraw more money, and then have some left over that would need to be changed back. He didn't seem to mind too much. The down side was that we had to wait at the airport for three hours, had forgotten to eat lunch, and were suddenly starving. We whiled away the time joking about different ways we could busk for money in the airport. None of them eventuated, which is probably a good thing. We didn't perish in the time between breakfast and dinner being served in-flight, so all was well again.

We arrived in New Zealand on the 30th March at 2pm, enough time to get through customs and leave the airport to drive to school and pick up the boys at 3pm. I was so glad to be home! :-)

I then spent the next few days recovering from jetlag. Ugh.

So that was our first big trip overseas (well, mine anyway. Deane's been a bit further afield than me). It was definitely an experience! Next time, I'd like to go somewhere a little cooler.
Posted by kreachr at 08:33