After arriving back from Thailand, it took a matter of days to settle back into the old routine. Deane went in to work and was told he'd been made redundant. Yay. He was already job hunting, but in a lame, half-assed sort of way. Now he's really putting in an effort!!

The boys had two days of school left before the Easter/school holidays, so on the afternoon of Good Friday we packed up, loaded ourselves in the car and headed up to Napier. Sadly, the weather was quite disappointing. Not nearly as hot as expected! I swear, once Easter arrives, regardless of when it is (late March, mid-April, whenever) the weather decides "ooh, it's Autumn, better get cold". And before you know it, BAM! You're scuffing around the house with slippers and big floppy jerseys on. Not that I'm complaining, I far prefer winter to summer. It was just such a stark contrast to what we'd experienced over the previous two weeks. I think my body was quietly protesting going from 38C to 15C. Wouldn't yours?!?

Anyway, it was nice to be back in the Bay, handing out the 'overseas goodies' and seeing friends and family. After a few days, it was back to Wellington so Deane could return to work and organise things there (after much consideration he decided not to apply for the available role, and go for something else instead. He's still working on that, but I won't say any more until he actually has something. Don't want to jinx it!!)

Me and the boys pretty much just blobbed for the rest of the holidays - basically what ends up happening every school holidays :-) We're a lazy bunch! One good thing is that while we were away, MIL and SIL managed to put a system in place where X loaded and unloaded the dishwasher for pocket money. This has continued, although he now only unloads. I don't have the patience to leave everything sitting on the bench, waiting for him to get home from school or whatever and load it all. In any case, he's got a chart on the fridge. He gets one tick per load. At the end of the week, the ticks are added up and he's given his pocket money (50 cents per tick, although if he's got nine ticks, I'm a nice mummy and round it up to $5). Last weekend he took his hard-earned money to JB HiFi and bought himself some (pre-owned) XBox games. He was pretty chuffed with himself :-) Soon we'll find a wee job for T to do, so he can earn some pocket money too. Although to be honest, he's not at all bothered that X gets money and he doesn't.

Now they're back at school (week two now) and everything is totally back to normal. I'm incredibly impressed at T's reading progress, and even his maths skills. This kid is bright!! Proud mum, right here!! Only problem is, he works so hard all morning, he's knackered by the afternoon and becomes quite disruptive in class. We're not quite sure what to do about that... Hopefully his teacher and I will be able to put some plan in place to curb that, but putting him to bed earlier won't work - he goes to bed at 6.30pm as it is! Oh well, I'm sure we'll come up with something eventually (or his behaviour will improve - fingers crossed). His first swimming class of the term (which is now School Age 2. Yes, after five terms in Preschool 1, he finally graduated!!) he did absolutely brilliantly. Doing good all round - yay!!

Crafting has resumed in full swing - must share. First up, there's the scarf I was making for the Ravelry Scarf Exchange swap. It was received by my swap buddy, so now I can share details - made with Malabrigo Silky Merino in the Cloudy Sky colourway (ooh, so smooshy!!) bought from Little Country Wools, the Irish Hiking Scarf: 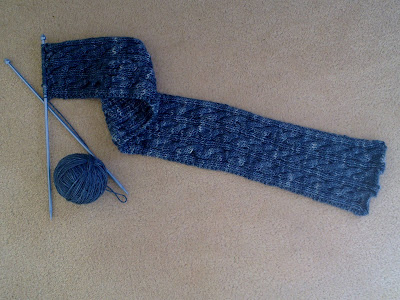 Yes, this is an in-progress pic. It appears as though I forgot to take 'completed' pictures, regardless of how many times I reminded myself I must do this. Hopeless. Anyway, here's a closeup: 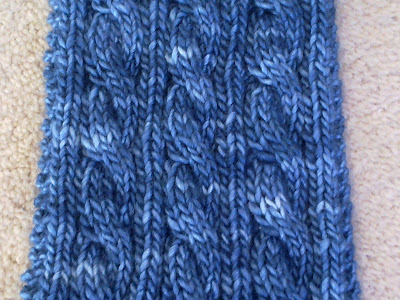 Pretty, huh? I would've kept it if I could. Never mind, I might get around to making one for myself one day (yeah, right!).

A friend recently had a wee baby boy, so of course I had to make some hand knitted goodies for him: 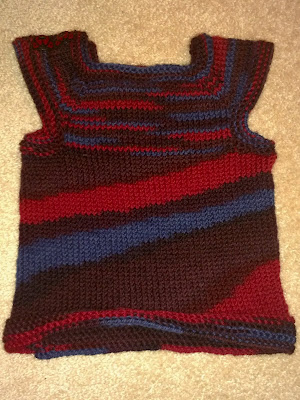 A t-shirt vest (seriously, how cute is that?) 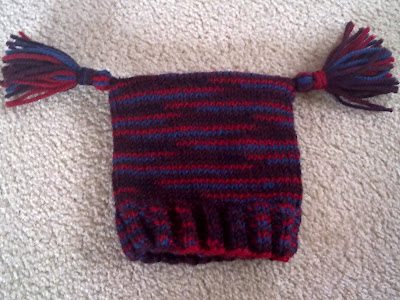 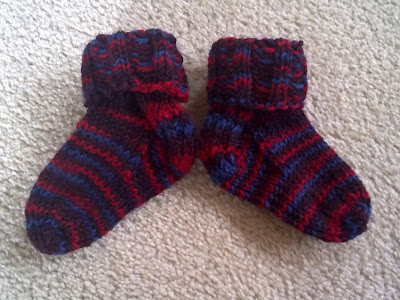 I made the baby size, but just made them a little longer in the foot. The vest is for 6-9 months, so I tried to make the hat and socks around the same, although to be fair, it's a little hard to judge. Especially when you don't have a baby model to work on. All these were knit in Utiku variegated, in the Blueberry colourway - it can be purchased for a very reasonable $15 per 200g from The Wool Company.

I finished my Skewed Wet Peacocks (some time ago now) but never shared a completed pic, so here you go: 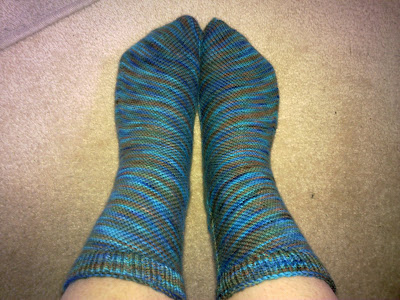 They're super comfy. To start off, they were a little hard to get on because of the minimal amount of stretch, but now they're great. They look awesome with jeans, and I love them. Made in Needle Food merino sock yarn, special sock club colourway 'Picnic in the Rain'. Oh, how I love Needle Food yarn. Michelle, you rock!

Also finished some time ago but not shared are my Bella Mittens (Twilight inspired, just in case you didn't know): 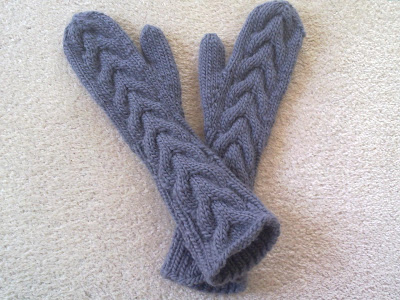 Knit with 12ply felted lambswool, these are super cozy. I can't wait until winter, so I can wear them. All. The. Time!!

Two more things I have OTN at the moment are squares for the Ron Weasley blanket swap (I'll post finished pics later) and my Clandestine Limes. This sock is one of the many fabulous patterns written by Cookie A - she's a very talented sock designer. Here's a pic of the one completed sock: 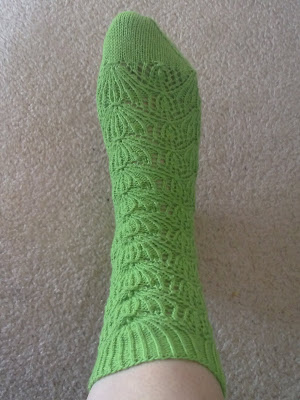 The yarn is TOFUtsies, which is a crazy mix of fibres, including crushed crab and shrimp shells. I tell ya, it's amazing what they can make these days!! Anyway, bought the yarn at Knitting Pretty - used to be just an online shop, but is now open in Karori Mall, on Karori Road, in Karori (of course!).

And just for a bit of eye candy (of the yarny variety), here are the three instalments of the Needle Food sock club #3 (I don't think I ever posted pics of them, so here you go):

Instalment #1 'There's Flowers in My Salad!' 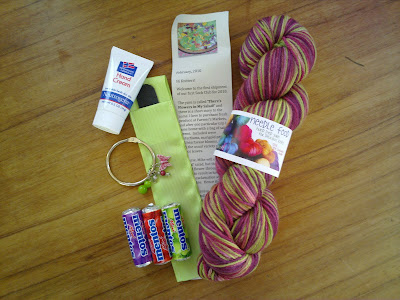 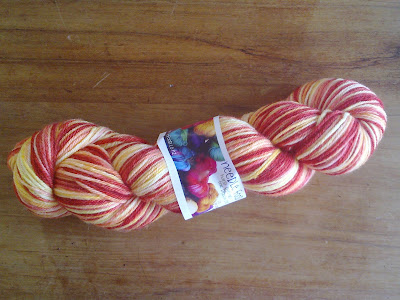 Instalment #3 ' Meet me in the Frozen Foods' 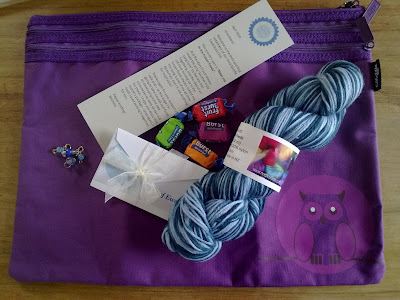 Now, to decide what to do with all these lovely skeins!!

Anyway, this post is getting a little long and picture heavy, so I shall leave it here for today (plus, I have to go and pick up the boys from school shortly) - more crafty goodness later ;-)
Posted by kreachr at 12:18