After a two week break over in a ridiculously hot, sweaty, smelly, crazy, busy, filthy country called Thailand. Don't get me wrong, it was a fascinating two weeks, but boy am I glad to be home!!

So we left on the 16th March - had to get up at about 3am in order to check in at the airport at 4am, for our flight at 6am. What a waste of three hours!! We had one backpack between us, which we kept as carry-on (in order to save having to find the baggage department in Bangkok Airport, and the possible loss of said bag between Sydney (arriving at 7.15am Aussie time) and Bangkok (the flight for which didn't leave until 5.30pm Aussie time)). We wouldn't want to confuse the poor airline employees...

The day was spent wandering around Sydney, riding the subway, etc etc. We got pics of the opera house and the harbour bridge. We've been there before, but ended up hanging out in Darling Harbour and the market, so didn't get anywhere near these two iconic landmarks. Had to do the touristy thing this time around :-) We got to see an aborigine playing the didgeridoo (very well I might add). He was selling CDs of his music, so Deane bought one. Haven't listened to it yet though.

After that it was off to Thailand, on a looooooooong 9 1/2 hour flight. Those horrid economy seats really aren't that suited to sleeping in are they? I think I may have managed about an hour or so, in bits and pieces. Also watched several movies and TV programs during the flight. I was very happy to not have to worry about luggage at the other end, as by that stage we'd been up for well over 24 hours and still had to get to the hotel before being able to lie down. I didn't really pay much attention to anything going on outside the taxi on the way to the hotel, which was probably a good thing. By the time we arrived and checked in, it was about 11.30pm. Ahhhh, blessed sleep...

Next day we got a taxi into town, which turned into an interesting experience. We got stuck in traffic for about 45 minutes, watching a protest parade of 'red shirts'. It was interesting to start with, but after about half an hour we were quite sick of it! Eventually there was a (man-made) break in the parade, and some traffic got through so we carried on. I was amazed at the sheer number of people, and malls, and market stalls, and just everything that was everywhere around. Bangkok has a population of around 12,000,000 people, and I have to say, it's a huge change from little old New Zealand. After a spot of shopping, we jumped in a tuk tuk and headed back to our hotel. Our tuk tuk driver was named Dang. 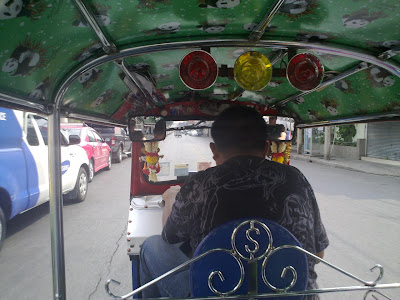 He was very friendly and very helpful. As we had no travel plans to speak of past our first two nights booked in the hotel we were in, he helped us find the T.A.T office where we organised the rest of our trip. He also found Deane a suit shop that ended up making him two suit jackets, four pairs of pants, two waistcoats, four shirts and two ties, all for a very reasonable price.

As we were staying in a 'spa resort' style hotel we of course had to get a traditional Thai massage... Never. Again. Bits of it were good, but a lot of it was very painful! I think I'll stick to relaxing massages from now on.

On the 18th, we headed off to Pattaya, where we were spending a large chunk of our time. A private car picked us up, and drove 2 1/2 hours to our next hotel. Pattaya is a whole different place to Bangkok. More tourists, and slightly more relaxed. I guess that comes from being a beach town. 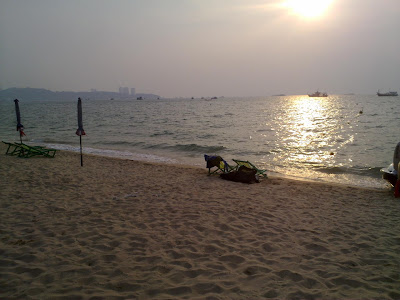 The International Music Festival was on while we were there, so there were more people than usual floating around. This made it slightly harder to walk around in the street (no simple task to start with!) but it was quite interesting learning how to get around by other means. We quite enjoyed the baht bus transport system. Basically, a whole bunch of customised utes drive around set circuits. They honk at you and if you want one to stop, you just wave at them. They pull over, you jump on the back, and off you go. When you want to get off, you press a wee buzzer, the driver stops and you get off. The standard fee is 10 baht per person. Just hand it in through the window and you're done! The only taxi's they have in Pattaya are ones heading back to Bangkok airport (there are signs everywhere 'Bangkok Airport 800 baht') or a motorcycle taxi, which involves you sitting on the back and the rider taking you to wherever you need to go. I prefer baht bus. But not when they're this full: 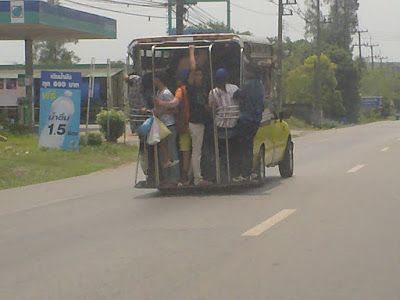 The beach was a two minute walk from our hotel, but we didn't actually spend much time there (Deane's not really a beach kinda person). But we did go parasailing. That was pretty awesome :-) 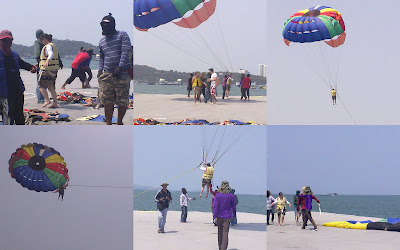 After a couple of days in Pattaya, we hired a car and drove to Chanthaburi. Deane wanted to check out the gemstone markets. Unfortunately our timing was quite off. We arrived late Saturday afternoon, and had to leave Sunday morning. There was hardly anything open. On Saturday night we wandered around the fruit markets though. They have the most amazing fruits, and seemingly endless supplies of it, all very fresh. Deane tried some of the quirkier stuff, but I stuck to what I knew. Mmmmmmmmmmmm, pineapple... Unfortunately for me, this was around the time when my heat rash really kicked in. Obviously it was taking me a while to adjust to the 30+ degree temperatures and constant sweatiness, and my arms, legs and chest was covered. I was itching like crazy! Deane dragged me over to the massage and spa place next door, where a bunch of very friendly ladies doted on me. It was quite sweet really. They bought us cold water to drink, a cup of tea, cold cloths for my rash. They went to the chemist, found it was closed, so one of them called her husband and had him find an after hours pharmacy where they got calamine lotion and antihistamines for me. They were so nice! After they insisted I have a shower and helped me slather myself in pink lotion, we wandered back over to the hotel and went to bed (it was after midnight by this stage). The next morning we slept in until 9.30am and barely had enough time for breakfast before heading to town to peruse what few gemstone shops were open, before jumping back in the car and heading back to Pattaya. This turned out to be a rather nervewracking experience, as the accelerator pedal stuck several times on the drive home (yes, the car was a Toyota). Stupid automatics!! Luckily Deane was driving - I'd have killed us!

From the 21st to the 25th, we stayed in Pattaya. Deane rented a scooter for us to get around on (and before you say anything, it's very common for two, three, or even four people to ride on one scooter at a time over there, so we blended in quite well!) We went to the Pattaya elephant village, 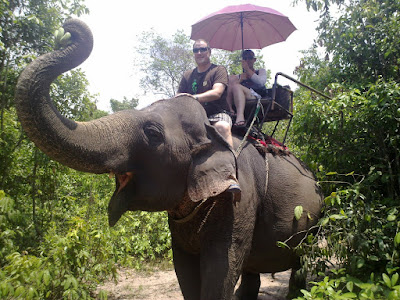 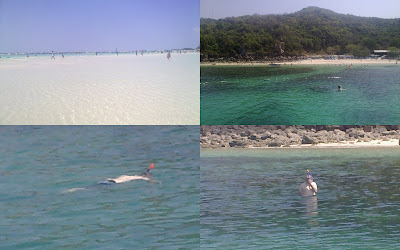 Did stupid amounts of shopping, eating, walking, sightseeing, and of course had to check out the local Go-Go bars ;-) Deane got some dental work done while we were there too.

Anyway, this post is getting a bit long and I've still got lots to tell you all, so I'll stop here and pick up again for the second half of our trip next time. See you again soon!
Posted by kreachr at 09:44