That's what it feels like I've been doing over the last few weeks. Man, have I been busy! Surprisingly, the house is relatively clean and tidy (I even vacuumed yesterday! AND cleaned the bathroom!!) But what I've been spending most of my time on is knitting and spinning. Oh, and reading. At the moment I'm reading The Journal of Mrs Pepys - Portrait of a Marriage, written by Sara George. It's quite a fascinating read, based in the 17th century (fyi Mrs Pepys is Samuel Pepys' wife). I've also been reading Harry Potter and the Order of the Phoenix for the HP Read-Along on Ravelry. Entertaining as always ;-)

But knitting! And spinning! Check it out - my Clandestine Limes are finished: 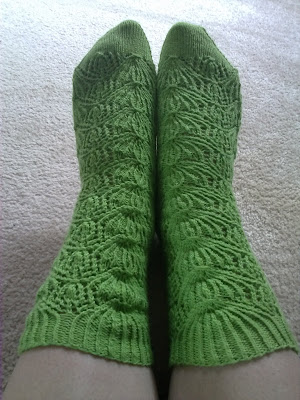 I'm about 75% done on my Monochromatic Monkeys - just 3-4 pattern repeats and the toes left - here's one (the other is hanging off the needle, you may be able to make it out behind my foot): 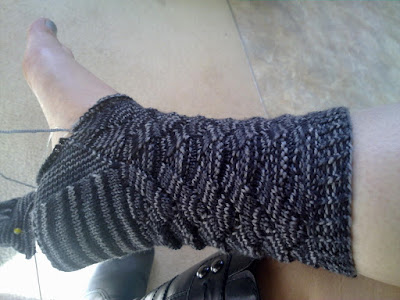 These are both designed by Cookie A, as mentioned in my previous post. Spinning has been going fabulously - I bought 1 kilo of silver merino roving off Trade Me for $28, and so far have spun all of about 140g of it. So I have just one skein, 134g (there's still some of the single left on one of my bobbins), 474 metres (can you believe it? Yay me!!) and I estimate it to be about 14-16 wpi, which is fingering/light fingering weight (sock weight or 4ply for us Kiwi knitters). It's still not the most consistent yarn you're ever going to find, but I'm pretty damn proud of it anyway :-) 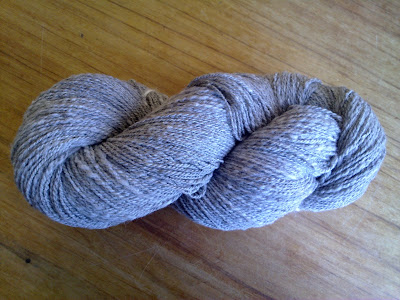 And with only 14% of that 1 kilo spun so far, imagine the possibilities!! The things I could make!!

I also created this little pile of squooshy goodness: 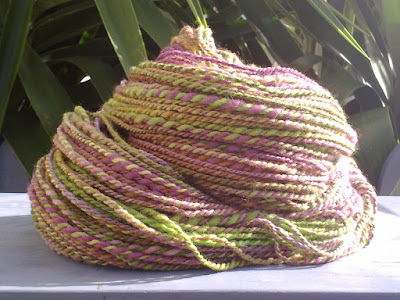 Doesn't it just look delightful? Almost good enough to eat... probably a little too furry though...

This was spun from the 'Pretty Lush' hand-dyed polwarth I bought from maude & me last year (you may remember it). It turned out to be about 140g of DK weight (around 11 wpi) - 222 metres. Mmmmmm, love it. Unfortunately it's still drying after being washed and whacked, so there's no face-smooshing going on yet. :-( It has remarkably similar colours to this Old Port rose I saw at the Wellington Botanic Gardens while knitting on Sunday: 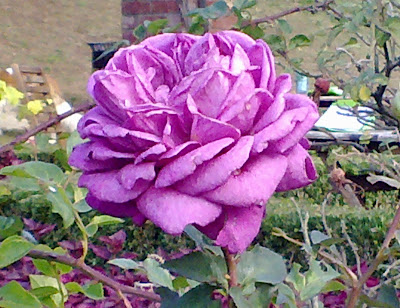 So I've named the yarn Pretty Lush Old Port - I know, not terribly original of me. Oh well...

I also stole (but later paid for!) this roving from Tracee's place the other day, while having a wee spinning session: 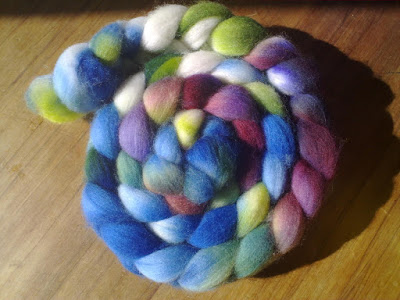 Such bright, pretty colours! This is going to be fun to spin! I just ordered another braid from her as well, because I saw it in her Etsy shop and couldn't say no. Maybe I should stop there... (also have another braid on the way for the May fibre club. Oops!)

Moving along - I received my scarf exchange swap package in the mail the other day, all the way from the US: 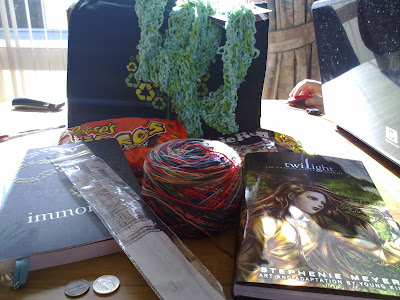 Included in the package was the Twilight Graphic Novel (awesome!!), a Twilight-inspired journal, giant bags of Tootsie Rolls and Reece's Pieces (how do I describe these? They're... interesting), this cool bag made out of 100% recycled bottles, some yummy-smelling incense, the scarf (of course), 6 cents (which I believe was accidental, but X likes them anyway), and a skein of Socks That Rock yarn, by Blue Moon Fibre Arts. Score!! This yarn shall become my next pair of socks :-)

As for other goings-on, I've decided that running shall feature highly this winter. Deane kindly informed me the other evening that he could now grab a handful of ass that could not be grabbed several months ago - I think I get the message!! ;-) So other than running, dropping the boys to and from school, necessary errands like supermarket shopping etc, and going to knitting and sewing, I shall be spending many many hours over the next few months sitting on my couch with a cup of tea, knitting and spinning. Ah, bliss!!
Posted by kreachr at 12:49