A child's right of passage

I guess I was deluded in the thought that we could avoid it. Seven and a half years so far, without a single incident. I was hoping against hope, but seriously, who was I kidding? I don't think anyone is safe. No matter who you are, or where you live, it's going to get you eventually, when you least expect it. What am I talking about, you ask? Well, I'll tell you. Nits. Yep. Disgusting, ugly, yucky, horrible head lice. Seven and a half years I have had my children (well, one of them for five and a half years) and not once have I had this problem. We've avoided it very well, no matter how many outbreaks there have been at school and kindy. We had always dodged the bullet. Sadly, not this time.

I am, however, hopeful that we caught it very early, and it is contained to the one head. It appears that way so far, although to be fair I've only checked two heads out of four. T has been 'infested', X has not. Deane I think is safe - he had a hair cut yesterday and came home unscathed, so presumably the barber did not spy any signs atop his dome. I am more inclined to give my wee boy a hug though, and as I type this I feel as though miniscule little legs are creeping over my scalp. Of course, this is likely to be paranoia setting in, but one can never be too sure.

Beds have been stripped, X dosed with lice repellant, Deane is right at this moment getting lice shampoo, and I fully intend to commit mass murder later this evening - of the buggy variety. (I have done this once before, spending a thrilling few minutes outside my childhood home squashing ants, until I had a major guilt trip after watching fellow ants carry their fallen comrades home. I felt very bad.) The school will be notified first thing tomorrow morning, and notices will be going home with every child tomorrow afternoon. Crush the little buggers!!

On a lighter note, while I'm here I might as well give an update on far more interesting things (to me, anyway).

I've fit in another two runs since my first 'not so flash' run of last week. 2km each time, much easier to handle. I'll work my way back up to 5km slowly. Yesterday's scenery was rather lovely, if a little cold. 9am, 5 degrees celcius, ice-covered puddles and frost everywhere. Gorgeous. 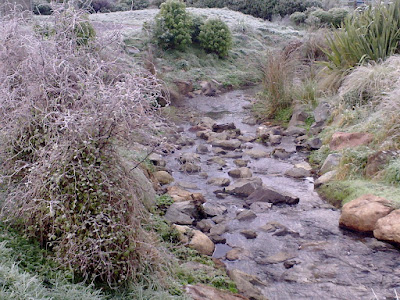 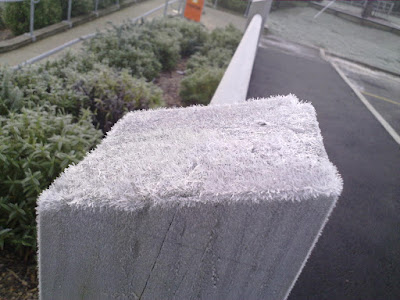 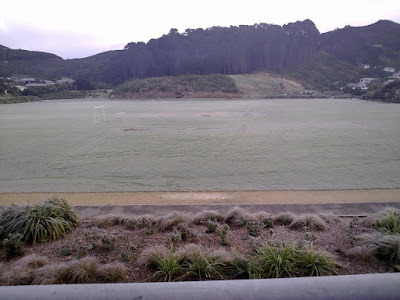 There's just something really invigorating about getting up early on a crisp Winter morning, and going for a jog around the local park. Of course, I'm not entirely mad, and won't be doing it every day. But that just makes you appreciate it all the more, right? ;->

I finished my 'vanilla flats', and have decided they can go to my sister. I can always knit more. 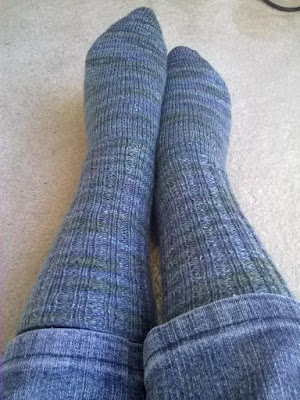 Anyway, I've already cast on for a new pair :-) My latest pair are going to be Esther socks (Ravelry link). Plus, the first instalment of the Vintage Purls sock club shall be arriving next week! And of course I have plenty of sock yarn sitting in my stash, waiting to be knit. In fact, I added to that stash on the weekend, while out at Craft 2.0 in Lower Hutt. I felt compelled to buy this yarn, as the colourway was created as a special request for another woman, based on the Hawkes Bay Magpies, and Hawkes Bay colours. Good old black and white. Very kiwi! 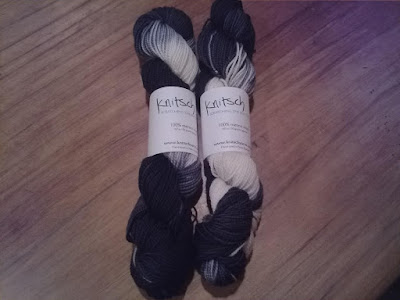 Courtesy of Tash from Knitsch

I think this sock yarn may quite possibly turn into a pair of socks for my dad. In all honesty, I probably owe him a non-heinous pair, after the ones I gave him for Christmas ;-) Although I'd be more than happy wearing them (around the house) they're not really him. He does however support the Magpies, going to every home game, so perhaps he will receive a new pair for his birthday...

Here's a progress pic on my February Lady Sweater: 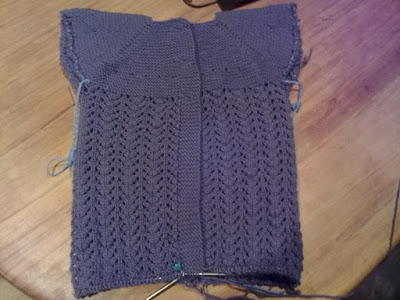 Looking good, huh? Absolutely loving this knit!! Elizabeth Zimmerman is a genius! And of course, many thanks to Pamela Wynne for adapting the pattern.

I'm making a pair of wrist warmers for my bff which are a little over 50% done, but no pics as yet.

As for spinning, I recently spun up some milk protein fibre which is deliciously soft and squidgy, and wonderfully shiny. 69g, 45m of bulky weight yarn, soon to be knit into a cowl: 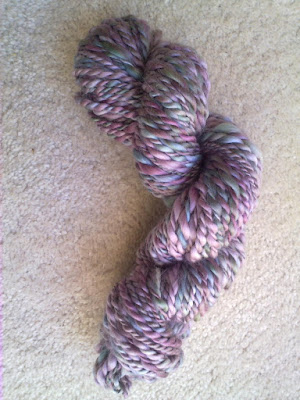 It started out as a braid of fibre named Aurora Borealis, bought from Beesybee Fibers on Etsy, and sent all the way from the US to here. Pretty, huh?

It was an interesting spin - quite slippery. I do maintain that it would have gone much easier on a new wheel, but I guess my old Addy will suffice for now. I've been eyeing up the Majacraft Rose and would dearly love to get one, but at a cool price of a little over $900, it will have to wait. At least until Deane secures a new job. Donations gladly accepted :-) Would've been nice to have a new wheel before the Tour de Fleece (another Ravelry link) starts in July, but alas, time and funds do not allow. Maybe next year. Although I will still be participating in the Tour de Fleece - my first time - it should be fun!

Well, better go and get the horrors ready for bed - let the killing commence!!
Posted by kreachr at 16:48