I think it's a great season. So many excuses to sit inside all day and do things like knit, and bake, and read, and generally be lazy :-) After the housework's done of course ;-) The weather here has been absolutely abominable for the last couple of weeks, so plenty of the aforementioned has been happening here. My 'illness' has almost gone, so running will (possibly) be happening again soon as well. But meanwhile, more fibery goodness to share!!

Since last post, I have completed several projects which I will kindly share with you all now. First up (drumroll please)...

A hat for Quidditch! (in other words, charity knitting for the HPKCHC) I've decided I'm going to knit hats for the Wellington Men's Night Shelter. It's getting pretty freaking cold here, and I'm sure there are plenty of guys around spending a lot of time in chilly conditions, bunking down for the night in shelters around the Wellington area. Somebody might appreciate a noggin warmer ;-) I got Deane to model it for me, although he whinged about having not shaved, so I cut his face off... Just in the picture!! Don't panic ;-P 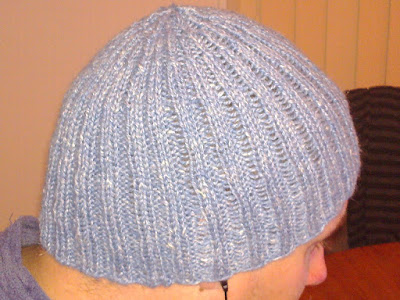 This one is designed by Dale Hwang - I've made a few of her patterns (the Animal Cracker hat, and the Lupin scarf which is my absolute fave!!), which turned out well. I think I like her ;-)

I then made a hat for T. 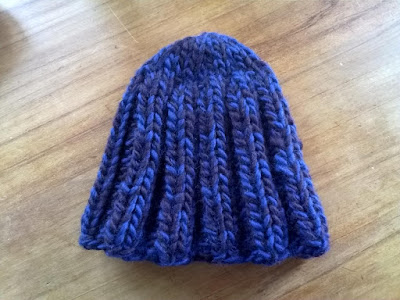 It was supposed to be for a bushwalk the school kids were going on - a woolly hat was a requirement for the walk. Unfortunately, I made it way too small - ie: it would probably fit a newborn (seriously!! You'd think I'd be able to judge the size of my kids heads by now!!) so I'm debating whether to give it to somebody with a baby, or rip it back to before the decreases and just make it bigger. Thoughts? Ideas? It's uber soft and comfy-feeling, knit with two strands of 12ply felted lambswool. Kind of made up the pattern myself (hence the major fail!!) so if I do rip it back and make it bigger, and it actually fits, then I'll put the pattern on here. Just in case by some miracle somebody actually wants to make one. Hahahahahahaha... ahem.

I finished the chunky knit cabled scarf I started a couple of weeks ago: 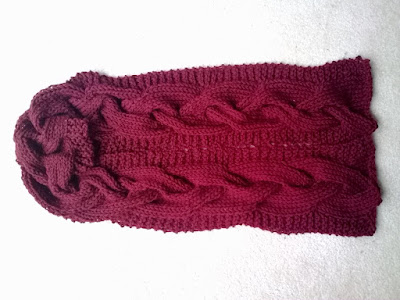 Soon to be going to a new home. I think the recipient deserves it :-)

I also finished all ten squares for the sixth round of the Ron Weasley Blanket Swap. They'll be winging their way to America within the week (just need to add the tags) and I'll be waiting patiently for my squares to arrive back. 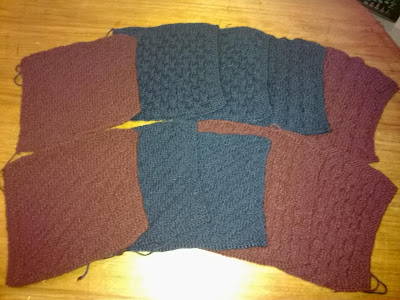 (Sorry, crappy night-time photography in play here). These are the January, February, and March blocks for the 2009 Afghan project by Hanks Yarn & Fibre

And last, but certainly not least, my February Lady Sweater!!! Although it's not finished yet, have to mention it so - gratuitous progress pic here: 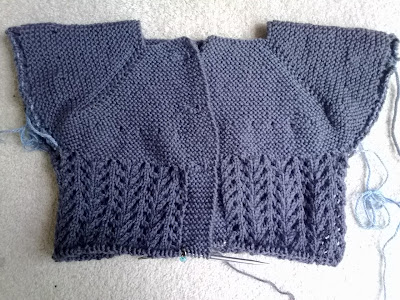 I am loving this knit so far. Can't wait for it to be finished!! Although I'm trying to pace myself, because it's for my OWL, which is supposed to take three months. I had about 30% complete in, like, three days. (It was just too fun!!) At the moment, it's at about 42% (going on how much yarn I've used compared to the total amount required) so I've slowed down on it at least. Now to eek it out until July...

Jill, my fabulous US Ravelry friend has been a really fun companion for things like yarn shopping, knitting group, movie watching and craft show dawdling (to name a few). We hit the Dunkley's Craft Show on Saturday, and managed to purchase a few goodies while we were there. My mini haul consists of some beads (soon to become stitch markers) from Pretty Funky Cool Beads, some divine smelling soap from The Scented Soap Deli - mango butter, and sandalwood. Can't wait to use them!! And I couldn't pass up the opportunity to buy some delicious-looking fibre from Anna Gratton. Looky looky!! 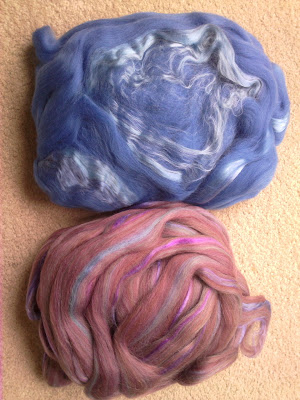 Knitting Pretty was having a yarn sale at her Wellington store, so on Sunday before knitting group, we moseyed (yes that is a word, I looked it up!!) on out to have a look. Jill ended up spending a pretty penny, but managed to get a few gifts, one of which was this: 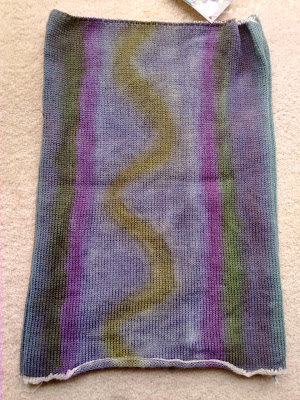 For me!! She is so sweet!! Just in case you were wondering exactly what this is, it's 'Flat Feet' - you knit socks with it, unravelling it as you go. The finished socks are a complete surprise, because each 'flat' is dyed differently by hand, and you just don't know how it's going to turn out. Exciting sock knitting!! At least for knitting nerds like myself ;-) And while we're on the subject of sock yarn...

Knitsch was having a sale on limited stock, so I got a few skeins: 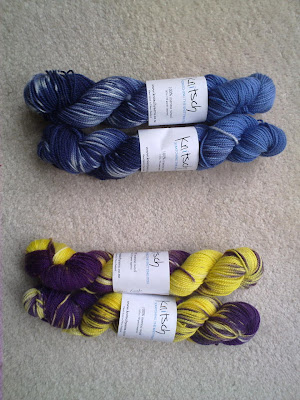 Up top is 'Good Evening, Aviator', and the bottom two are 'Van Gogh'. Ooh, they look good...

But for now - Must. Stop. Buying. Yarn!! Especially since Deane is still 'between jobs'. (Ugh. Could it take any longer?!?!?)

I'm just waiting for the US clocks to roll over to June, so the Sock Knitters Anonymous June Sockdown Challenge can start, and the new classes for the HPKCHC will be posted, so had a bit of down time today. Managed to get some baking done, which is something I haven't done in months: 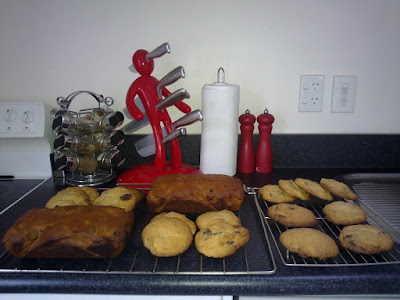 Cinnamon loaf (x2) and giant Toll House Biscuits (aka chocolate chip cookies with ridiculously big chocolate chips in!). Nothing quite like a house full of baking smells!

Anyway, I'm getting the hurry up from Deane - he's waiting to watch Battlestar Galactica so I must away. Till next time - ciao!
Posted by kreachr at 19:36