You know the little 'incident' we had with the creepy crawlies? They are no longer!! I smote their asses!! This was helped significantly by the fact that we gave T a buzz cut. Now if he was a girl, I don't think we would've got away with that. So, yay for boys! And he didn't even gross out when we told him what was going on. I'd imagine girls would start freaking out, going 'eww eww, get them off me!!' (which is probably what I'd be doing. I mean, think about it! Little bugs crawling all over your head, sucking on your blood, laying eggs and pooing everywhere... blech!) He just took it in his stride, and played Nintendo while I doused him with spray and combed the crap out of his hair. Nary a sign to be seen, to wit - no eggs, no bugs, no 'dirt'. Now, if we can just avoid him being reinfested... The rest of the family came through unscathed, much to my delight. I was horrified at the thought of trying to get the little buggers out of my hair. Relief abounds!!

Running
I managed to squish in a 3km run last week, so hopefully within a few weeks I'll be back to my 5km goal.

Knitting
Oh, such fun to be had!! I am thoroughly enjoying my February Lady Sweater, and in fact have only one sleeve left to go. Said sleeve could be knit in one night, while in front of the telly watching Firefly, Chuck, Battlestar Galactica or Castle (to name some of our favourite programmes at the moment, of which there are many) but then it would be over :-( So I'm trying to stretch it out a little and intersperse it with other projects. Such as:

T's 'bushwalking beanie' which was originally made too small. I picked up the stitches before the decreases, frogged back and knit an extra two inches before redoing all the decreases. Now it fits perfectly! (And he looks uber cute in it, although I'm biased). It even fits me, but then, I have a small head - like, 54cm ;-) 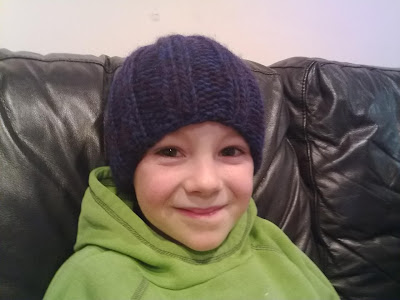 As promised, the pattern for the hat:

I've also been knitting these lovely socks, in some Knit Picks yarn given to me by Jill: 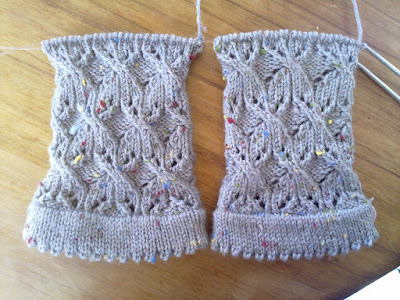 These are Esther socks (Ravelry link) designed by Stephanie van der Linden. Pretty :-) Hopefully I'll get them finished before the end of the month.

I knit another hat for the Men's Night Shelter - the pattern is BasicSimpleLazy by John Brinegar - and it really is :-) Here it is, modelled by my long-suffering husband while he was trying to watch something (I shoved it at him, indicating that he had to put it on, which he did, I snapped a quick pic, then ripped it off his head and left him in peace. I'm good like that): 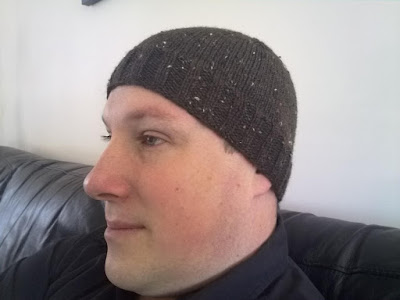 So that's two hats for the night shelter so far - more to come.

I cast on for a cowl with my milk fibre yarn, but didn't like how it was knitting up, so ripped it back and am yet to start a new one. I probably won't take long to do that, because the yarn is so soft and squishy, I'd love to be wearing it right now. But that February Lady Sweater keeps calling me...
Posted by kreachr at 13:16