I have been abandoned. Left alone to raise my two children... nah, just kidding ;-) But Deane has gone to Auckland to start his new job, and I'm still in Wellington getting the boys to school every day, feeding them, helping them with their homework, making sure they wash and change clothes regularly so they don't start to smell - the usual. Still not sure when we'll be joining him up there, so watch this space!

Meanwhile, I've got lots of alone time (after all that not-alone time while Deane was home for three months. It never rains but it pours!!) which means knitting, spinning, watching what I want to watch, when I want to watch it, quiet reading time, and above all, far less mess. Yay!! Less mess means more knitting :-)

Unfortunately though, two of the things I'm currently knitting have been sent to time out to think about what they've done. They've been very naughty. My malabrigo lace scarf has an incorrect row several pattern repeats down. I'm too scared to fix it. My dear friend Margaret (brave woman) has volunteered to help me with this little conundrum, so hopefully the scarf will be coming out of the naughty corner soon. The other thing, my Cherie Amour, may be there a little longer. The lace pattern decrease chart was not well written (probably worked perfectly for a specific size, but certainly not all of them) and it's a bit of a mess unfortunately. Had I read other peoples notes on said pattern, I could've saved myself a lot of trouble. However I didn't, so Cherie has gone into the naughty corner and is hopefully not colluding with malabrigo scarf about what other mischief they can get into!!

One dear knit that is behaving is the latest sock club instalment from Vintage Purls. Oh so pretty, I'm loving this knit. It was certainly a challenge, but one I think I was ready for - I just needed a little push, and the sock club was perfectly timed. The pattern is called 'Bug Out', and the yarn colours are 'Top Soil' and 'Beetle'. Here's what I've managed on the first sock so far: 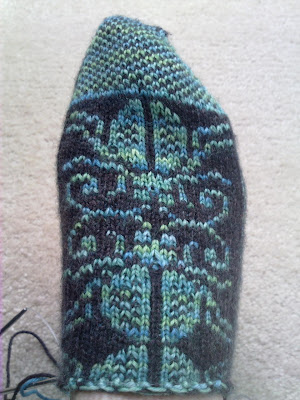 Top of the foot 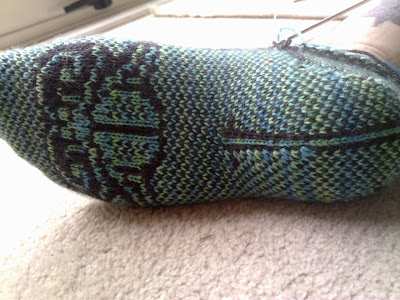 Bottom of the foot - apologies for the terrible picture, but it's impossible to get a good shot of the sole of your own foot!!

Now I freely admit that this sock is far from perfect, but I love it anyway. It's the first real colourwork I've done before and I'm super proud of it. I'm knitting with one colour in each hand, and I'm doing pretty well. Although my two-colour purl leaves a lot to be desired (I probably look quite ridiculous when attempting it) but luckily you only have to purl on the heel (and presumably the ribbing for the cuff) so I'll just do those bits in private ;-P

And it occurred to me that I never posted a pic of my completed February Lady Sweater. I had full intentions of getting a photo of me wearing it, but that just hasn't happened, so a picture of it all by its ralf will have to suffice: 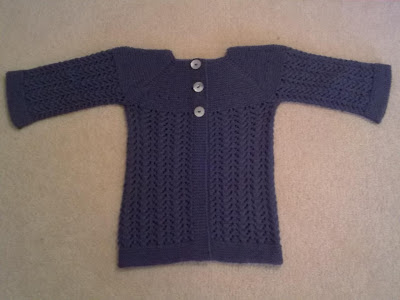 This was finished end of June/early July. And it was accepted for my OWL, so I passed. Yay! 150 points for Hufflepuff!! It fits perfectly and I love it. The sleeves maybe could've been a little longer, but oh well. I'll keep that in mind if I ever make another one.

Oh, and I finished a scarf for my mother-in-law and posted it off - it may look familiar (I made one exactly the same a little while ago for my friend KJ): 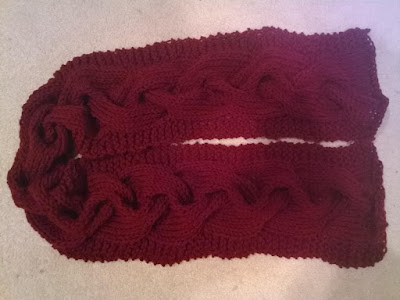 I assure you that this is indeed a different scarf.

I think I'll cast on for my dad's socks next (pattern and yarn already organised, measurements obtained - systems are go!) - might get them done for his birthday and Father's Day (both in September).

Which reminds me - I'm a terrible daughter. I forgot my mother's birthday!!!! How awful is that? Who forgets their mother's birthday?!? Sad. Very sad. So mum, if you're reading this, a pair of socks is coming your way!! If I knit my butt off, I might get them done in time to send with dad's socks...

Anyway, must dash - I have a carrot cake in the oven, and the timer is about to go off. Then it will be time to pick the boys up from school. Stitching group tonight (hurrah!!) and they're coming over here. Must vacuum!! Bye for now :-)
Posted by kreachr at 13:32