Today was good, today was fun, tomorrow is another one

We got up this morning, went through the usual morning routine, and headed off to school. The sun was shining, which was unexpected, so I went for a run after dropping the boys off. Got all my housework done before having a lovely shower, then sat down to watch Dollhouse and knit for a while. A bit of pottering around, some lunch, a few emails for work, and off to pick up the boys from school (seriously, that six hours goes really fast!!) Read some more of my book for book group while waiting for the 3pm bell (trying to finish it by Sunday so I can post it back first thing Monday morning), and T came running out with a huge grin on his face, excited to tell me that his art work was 'the winner'!!

Every year their school has an art exhibition, where each child in the school makes or paints something, and the staff create an artwork as well. The staff art gets sold in a silent auction to raise money for the school, and all the childrens' artwork is displayed for parents to marvel over during a community evening. Unfortunately Deane wasn't able to attend as he was busy working, but I went along with the boys to have a wee look, and took a picture of each. X's class made papier mache flowers, and T's class did mixed media paintings of bugs. 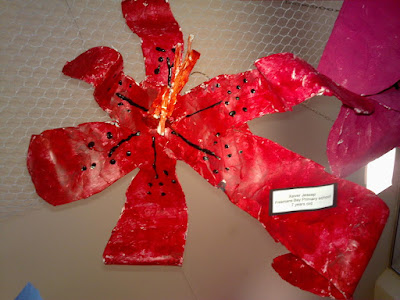 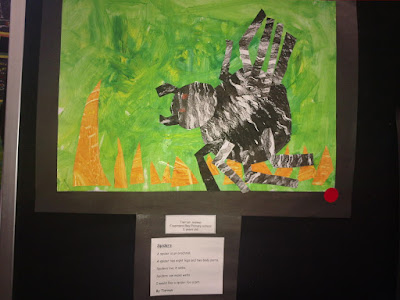 Cute, huh? When we went to the exhibition, there was a red sticker on T's painting. T noticed it, and being the particular child that he is, he didn't want the sticker on his painting as it was not part of the painting and he didn't put it there. He pulled it off and threw it on the ground (as he often does with many things throughout the average week), and I had to explain that it needed to stay there, because it probably meant something. It did. That was the indication that his artwork had won first place in the '5 year old' category. Good thing I'd picked it up and carefully put it back on when he wasn't looking ;-) His prize is a $20 book voucher from the local bookshop. Perhaps we'll take him out to spend it on the weekend.

Once we got home, I got stuck into a project I've been meaning to do for a while, and just hadn't got round to. Surprisingly, it only took a couple of hours. Would've been less if I had ribbon on hand, and didn't have to feed the kids dinner in the middle of it all. In any case, it was a quick and easy project, and I like the results. Ta da - knitting needle roll!!! 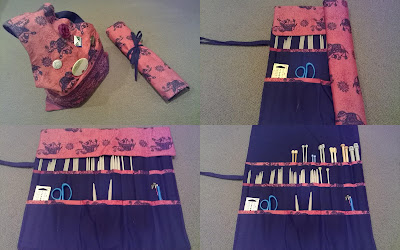 I ended up having to make my own ties because I didn't have ribbon, and it took a bit of trial and error. But I got there in the end, and I like the result. Plus, as you can see, it matches perfectly with my knitting project bag I made last year!!

I got the pattern for this super cool needle roll from this blog - a lady named Angie from Ohio, whom I've never met, most likely never will meet, but who was kind enough to share her pattern with me and (no doubt) many others. Thank you Angie :-)

The weather man has forecast lots of wind and rain for the weekend, and possibly thunder and lightning (ah, I love me a good thunder storm!!) so I expect to get lots of knitting and reading done this weekend, while Deane entertains the boys with nerdy games and movies. I guess there are some benefits to being the only 'girl' in the house ;-)

Have a good weekend everyone!!
Posted by kreachr at 20:16