Silly question really - it's quite clear I do. Not sure if anyone's been paying attention to the list of books I've been reading this year, but the tail end of that list is rather heavy on the Sookie Stackhouse novels. I've just finished #8, and have reserved #9 at the library. That will leave the latest book, #10, left for me to read. And then what? Hmmmmm?? Maybe I'll read the Twilight series again...

Knitting
I finished my pair of Autumn Spring socks, and they turned out to be just fine size-wise, so no worries there. The pattern is Interlocking Leaves, and the yarn is 'Sunrise' from Grrrl Shaped Yarns (no longer available - probably a good thing. Could take years to arrive if you ordered any) 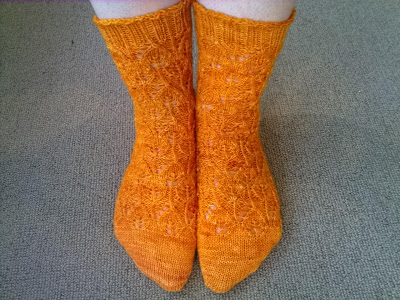 And I've started some socks for Deane for Christmas - I luuuuuuurve them. They are so cool in a nerdy sci-fi kind of way: 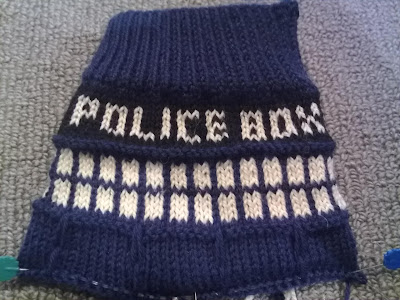 I'm having to knit them one at a time because I couldn't find the other end of the blue yarn (main colour) in order to do both (one from each end of the ball) and I wasn't in a position to be able to easily wind half off into a separate ball (cast on during Wednesday knitting at The Little Craft Store). Still, the benefit of doing one at a time is a) less tangles, and b) it goes faster. Of course, you then have to knit the other sock, but hopefully I won't succumb to the SSS (Second Sock Syndrome. I have it bad. That's why I always knit two at once).

Just in case you hadn't figured it out, or you've got no clue who Dr. Who is, these are TARDIS socks (Ravelry link). And they are awesome. I've had to adjust the pattern slightly to make them bigger (the pattern is written for average sized womens feet) but so far so good.

I had a skein of Malabrigo Rios left over from the recently knit afghan, and as this shawlette only needs one skein, I thought 'what the hey?'. Now the bigger question, to keep, or give away at Christmas?? (Pics to be posted later, it's kinda weeny at the moment and doesn't look anything like a shawl.)

Spinning
I gave my fabulous new wheel a test-drive of sorts, spinning up a wee 20g sample of Vintage Purls fibre into a navajo-plied mini skein (I forget the yardage. Who cares? It's only a 20g mini skein) and have moved on to bigger and better things (well, not necessarily better, but that's how the saying goes so who am I to change it?). There is another Maude & Me Spin-Along in progress, and seeing as I have five braids of M&M fibre just sitting here doing nothing much, I figured I should probably participate (and of course there's the chance of winning even more fibre!!!). Plus, it gives me an excuse to post a pic of my lovely: 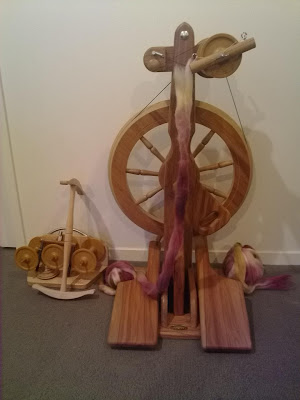 Seriously, I get the best presents!

And of course, progress pic of spun fibre (only about a quarter of the way through the fibre so far, better get cracking!!) 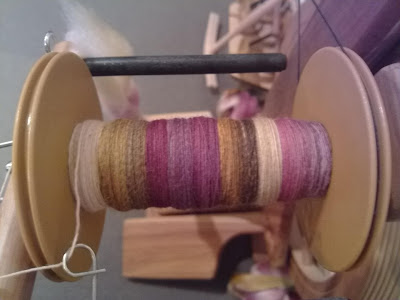 'a design for life', one of Miss Tracee's specialty colourways

Weekend Happenings
We managed to have a slightly more active weekend than our usual 'blob around doing nothing' weekend, which made a nice change. We drove out to Piha beach, and while the tide was out we got to have a nosey through the rock pools. Deane discovered this wee critter, which I think is just beautiful: 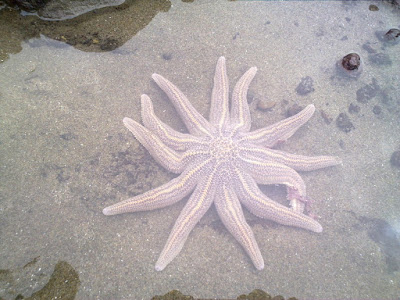 There were also little crabs, anemone, chitons, the usual rock pool lurkers. Unfortunately I couldn't really get any good pictures :-( Deane took a heap of the boys playing in the waves, but despite my best efforts, I've been unable to get him to load them onto the computer so I can't post them on here. Oh well...

Also during the weekend, I made the boys some new swimming bags, all ready for their first lesson this Tuesday (which went well, although they're in the same class at the moment and tend to play up, so hopefully X will advance soon and they'll be split up). The Batman one is made from a fat quarter of fabric I bought while in Wellington. I had a neat pirate fabric that I was going to use to make T's bag, but he chose the starry fabric instead. They're fully lined inside with PVC so there'll be no leaks. Yay! 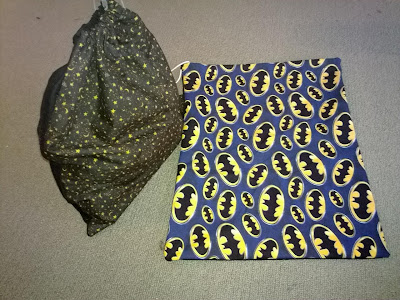 They're the perfect size for togs, towel, goggles, and when they're in the pool there's plenty of room for clothes. Awesome!

Exercise
This category used to be headed 'running', but since I've been going to the gym as well, I thought I'd better rename it. Anyway, the Pump class I went to last week was really good. So good, I could barely get down the stairs afterwards because my legs were oddly jelly-like. I felt the effects for a few days afterwards, pretty much everywhere. I'm keen to go back for another class - perhaps next week. Since then I've tried out a Step class (failed dismally! Far too uncoordinated) and an RPM class (which is 45 minutes of hardcore cardio workout on an exercise bike - and the instructor is ruthless!!). I think perhaps a mixture of Pump, RPM and the odd run will be a good exercise regime, covering all the bases. Sadly, I haven't been able to increase my running time/distance past 12-15 minutes (around 2 to 2.5km) so I'm going to try a different approach, going back to the 'beginner' running programme I started with last year, at about the week 5 or 6 stage and increase from there. It worked last time, so there's no reason why it won't work this time, right?

Well, I've been blabbering for a while now, and this post is getting quite long so I better get going, and knit some more of those uber cool TARDIS socks - my goal is to finish them by the end of the month so I can turn them in for Muggle Studies :-)