...although technically not here until December. But with weather the way it's been lately, I'd be happy for it to take its time. Gone are the days of rain and chilly winds, I am welcoming warmth and sunshine. Reason to wear shorts and singlet tops, and my ever-favourite $70 leather jandals (which by the way, I've had for about four or five years now, and they've still got at least that long in them again, making them totally worth the expense!! So there Deane!)

Today was one of those days (as was yesterday). This morning after dropping the boys at school, I headed off for a run around the park, managing three blocks of nine minutes, with two minute breaks in between - I'm back on track!! Even one of the road construction guys noticed, and commented on my third lap (which was actually my fourth, but who's counting?). Guess I'm pretty memorable! Or maybe he just noticed my jiggly butt...

Back home for a shower, then into town to purchase some more running gear (since I'm now going to the gym on the days I'm not running, it's a little hard to keep one set of gear always available - I've only got two pairs of shorts) and some new sunglasses (my current ones are soooo last season ;-P). I stopped in at a cafe for a sandwich and a cup of tea - my favourite giant cup from Esquires - then I wandered back down to the park with my crochet and current book (It by Stephen King - something I've always wanted to read but never got around to). I spent a lazy hour and a half lying in the sun (covered in sun block of course) reading and crocheting, and narrowly missing getting trampled by a bunch of guys playing a lunchtime game of touch rugby. Eventually I moseyed on home, made the beds (because I'd been lazy and hadn't made them earlier in the day) then headed off to pick the boys up from school. T did his homework while X had swimming lessons, and now we're home again.

Dinner is being constructed out of leftovers and whatever else, simply because its been one of those days, and I'd like to continue the slovenliness I've become accustomed to. Me, I started with an appetiser of watermelon. Seriously - watermelon!! A sure sign of summer on the way if ever there was one. I made myself leave some for Deane, because I'm such a good wife (mwahahaha), but I think I may just get some more tomorrow. Mmmmmmmm, watermelon.....

On the knitting front, I've been a busy little beaver. Deane's TARDIS socks are done, and I love them (although I may have mentioned that already). Unfortunately they're waaaay to big for me (trust me, I checked), so I guess he really will be getting them for Christmas :-( 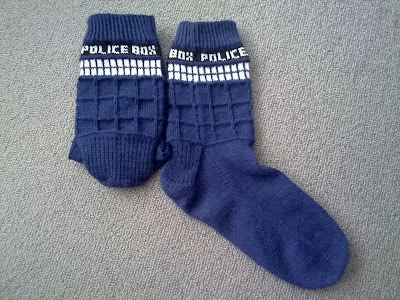 And I also finished my Vespa shawl... thingee: 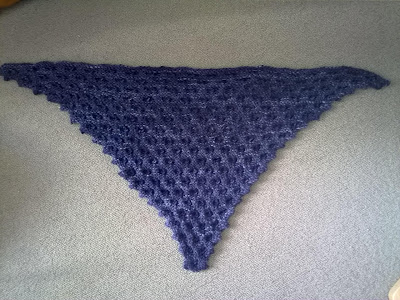 Since I finished it before the end of October, I managed to hand it in for Defence Against the Dark Arts - as a deterent for vampires: 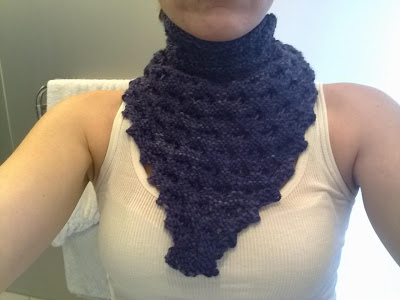 I'm now crocheting squares for round seven of the Ron Weasley blanket swap (which are due by the 15th November!!!) and then I'll be starting a surprise present for X. He wanted a Green Lantern blanket to replace 'kiki', his dearly beloved (to the point where it literally fell apart) baby blanket. I've found the perfect green, a stupidly large 400g ball of black acrylic, and instructions on how to crochet a circle and turn it into a square without it looking stupid, so hopefully I'll be able to construct a reasonable replacement blanket by Christmas.

Spinning-wise, I'm over halfway through the braid I started for the Maude & Me Spin-Along, so I'm on track to get that finished by cutoff on the 21st November. I plan to navajo-ply it, which will be the most I've ever done, so I really hope it turns out!! Looks like it'll be around a sport weight, give or take a few WPI.

Mum's coming to stay next week, so I guess I'd better spend some of this free time I have clearing some space in the spare room. I'm not sure that's actually possible, but I should at least try. Perhaps the weather will oblige by turning nasty for a few days, giving me an excuse to stay inside. I doubt it though. Mum, I think you'll be sleeping in the lounge...
Posted by kreachr at 16:29