Just one more week until school starts! I'm so excited, I can't wait!! The boys on the other hand...

Still, we've managed to get through another week without anybody being seriously injured, so thats gotta be a plus, right? There were definitely some possibilities for injury, or loss of body - T trying to cross the road before the lights changed (I had hold of his hand, so he didn't get far), X and Deane going fishing on Friday night (yes, night, as in, dark) just as Cyclone Wilma was about to hit the Auckland Harbour (the expedition got cut short by an hour to avoid tragedy), and my skirt getting caught in the escalator at the local mall (I managed to pull it out, avoiding disaster). Life is never dull here!

The 'men' managed to catch a few snapper (although I think they really only caught one (the smallest) and were given two by other people fishing on the same boat): 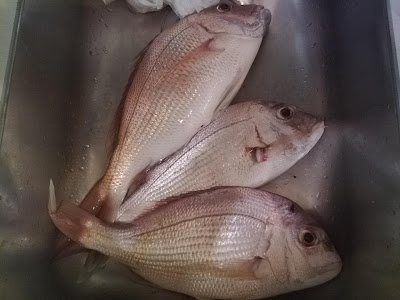 When they arrived home, dripping wet (the boys, not the fish) they had a nice warm shower, X went to bed, and Deane 'filleted' the fish (translation: hacked the fish into chunks). We had them for dinner last night. T is now looking forward to when he's old enough and big enough to go out fishing with dad too (the charter company won't allow six year olds apparently).

During the week, I've been keeping busy knitting (when am I not?) and reading, and generally fluffing about. I've finished a couple of projects: 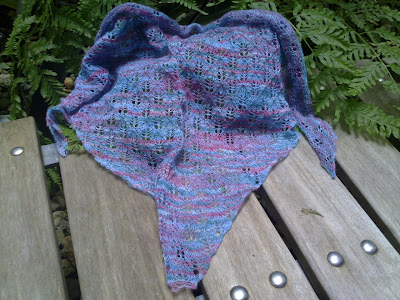 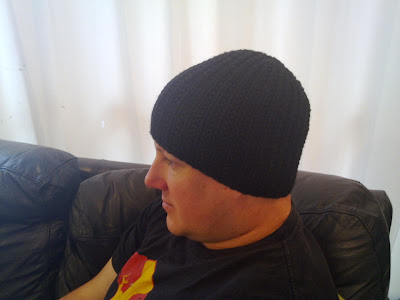 A hat for Deane, which took only a few hours to knit, using Knit Picks bulky yarn I bought last year, thanks to my 'yarn mule' Jill ;-) This hat is super easy to make, and looks really good (don't judge it by the pic, please. It's not the hat's fault...)

And made progress on my Jaden sweater - I've now finished both the front and back, and joined them at the shoulders. I've cast on the sleeves, but have only done about five rows so far. It's going on a bit of a hiatus, while I knit X a sweater (Ravelry link).

I also knit a square for the latest round of the Ron Weasley blanket swap: 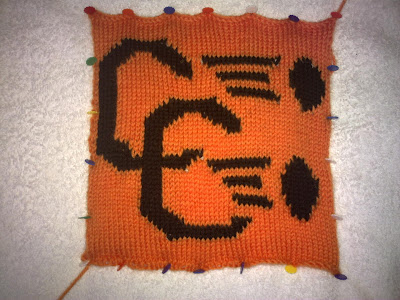 Looks good from the front, but the back looked like this: 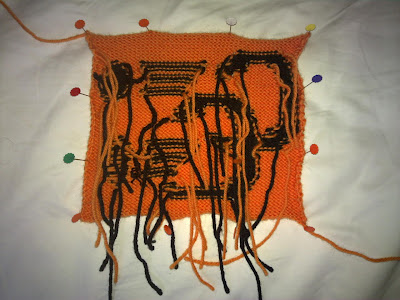 Ugh. Not pretty. Its okay though, I spent about fifty hours weaving in the ends (haha, just kidding, more like half an hour), and it now looks like this: 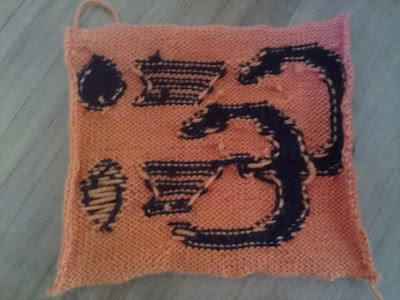 I'm sure there are a few of you out there wondering why I'd knit a square like that. So let me explain - that is the logo for Ron's favourite Quidditch team, the Chudley Cannons (you can Google it if you like, but they're fictional, therefore don't really exist. Pity, they'd probably be really hot). The logo is kinda cool (designed by a fellow Potter fan on Ravelry, specifically for this swap - Rav link here), but since there's over 30 ends to weave in on each square, and I have to knit ten, and I also have to block them so they stay flat, I'm not sure I'm going to go ahead with it. I may be a bit slack and find something a little easier to do. I guess it depends on how I go with other projects as to how much time I can put into the squares... (so many tough life decisions for a stay-at-home mother!! You wouldn't believe the pressure! ;-P)

I only spun a bit more of the alpaca before I decided to ply it and see how it was going to turn out. I'm glad I did, because its awful! Very rope-like in texture, not at all soft :-( Its going to have to be washed and carded before being spun I think. And I really can't be bothered doing that right at the moment, so its been put on the back burner, in favour of some lovely, nicely prepared, hand painted maude and me fibre that is practically screaming at me to be spun! Only in my head, but still... Far more relaxing and enjoyable (^_^)

I've managed to fit in two 3.5km runs in the last couple of weeks, so I'm looking forward to getting back into it once the boys are back at school. Things are starting to get a little wobbly again.

Right now though, I'm going to dig out some yummy fibre and get reacquainted with my lovely - we haven't spent much time together this month, and I think she misses me...
Posted by kreachr at 15:10