Hope you had a good one. I got a lovely surprise yesterday afternoon: 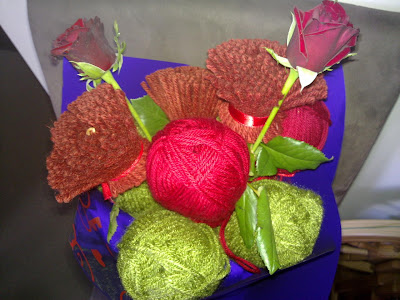 How cool is that?? Deane made it himself :-) It's got two pairs of bamboo needles in it too. I didn't get him anything - oops.

Earlier in the day, I had the great pleasure of meeting Kathy Reichs, which was kinda awesome. Although (not surprisingly) I did blunder it a little. I'd decided beforehand that I would give her this scarf: 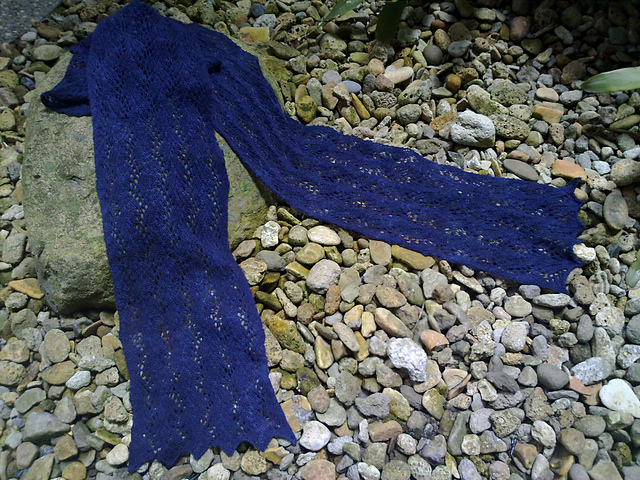 And I had a whole conversation in my head (as you do). I got to the bookshop early, and waited at the front of the line - there were lots of people milling about, but nobody was game enough to be the first. So I grabbed the Sookie Stackhouse short story compilation off the shelf, turned to the third story (which was the one I had read up to. I've made a couple of half-hour visits to the bookshop before - I'm working my way through the stories, so I don't have to buy the book because its $30 and I don't want to spend that much on it) and read quietly, looking nonchalant, while patiently awaiting the arrival of 1pm.

At 1pm on the dot, in walks Kathy Reichs. She sat down, moved the wee sign on the table, and smiled. So I wandered up with her latest book in hand, and my friend's name on the front cover on a post-it note (which we'd been asked to do beforehand, so Kathy would know who to sign the message to). We said hello, she started writing, and while she was doing this I asked if she would accept a hand made gift. I don't think she'd answered before I practically threw the scarf at her. It was all folded up, as it had been in a bag, so she didn't even get to look at it properly. She did say it was lovely, and asked if I had made it. Her publicist asked if it was knit or crochet. I said that yes I had made it, and it was knit. Then - get this - I said "I hope it keeps you warm in your... country". Seriously!!! What an idiot! Kathy then asked if my name was Tania (the name she was writing in the book) and I said "no, that's my friend. She's a fan". Then I said thank you, grabbed the book, and left. Poor woman probably thought I had a screw loose!

I walked to the back of the store where the armchairs are, finished the short story I was reading, returned the book to the shelf, and walked out of the store. On my way out I noticed that the line (which I thought was quite long to start with) was at its end - she was talking to the last person, who was shaking her hand and gushing over her. And here I had been worried that I would take up too much time and thought I had better be quick! She was only there for half an hour and I thought if I spent too long asking questions or talking, people would get annoyed. So I rushed. Shouldn't have. It was only 1.10pm.

I've written a letter of explanation to her explaining my odd behaviour, saying what I wanted to say, asking what I wanted to ask, and telling her a bit more about the scarf I shoved at her. That was my first 'author-encounter' and going by how I behaved, probably my last. This letter will also be my first 'fan letter'. I hope she doesn't put it in the 'stalker' pile...

On a brighter note, I've made quite a bit of progress on X's cabled sweater - I've now got the front, back, and one sleeve done. I have to wind more yarn before starting on the second sleeve, but that won't take too long with my handy dandy new ball winder!!

I'd done a little work on the sleeves of my Jaden sweater, but royally screwed up the pattern. They've now been frogged, and are waiting until X's sweater is finished before being cast on again.

I've managed to get a little spinning done - some yummy maude & me fibre, 'waking up the wolves'. Not sure how I'm going to ply it yet though, I think I'll decide a little closer to the end.

I've also managed to go for a couple of 5km runs in the last week - hurrah!! Getting back on track! See, having the boys back at school really makes life run a little smoother :-)

For now though, I'm off to get my housework done, so I can sit on my butt watching Supernatural and knitting a cabled sleeve. Enjoy your day!!
Posted by kreachr at 09:23