My idea of fun

Is spending the weekend doing crafty stuff. Which is exactly what I've been doing! On Friday evening I finished off X's sweater (Rav link) while watching Buffy: 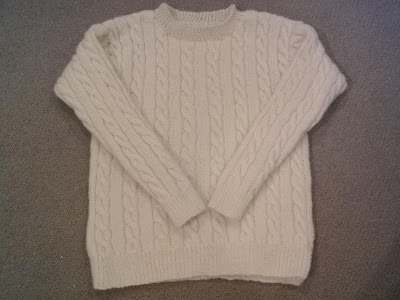 I think it came out really good, and its definitely a bit softer, whiter looking, and far less sheepy smelling after a few soaks. I'll have to give it another wash to get the neck clean (which was knit after blocking and sewing together) and stretch out the sleeves a bit - they're a little too much like leggings worn on your arms. You know what I mean - skin tight! Looks a bit silly really. Nothing a good blocking won't fix though. I would get pictures of X wearing it, but he refuses to have it on for more than a few seconds. He says its too itchy. I have the sinking feeling that I will be donating it to the local women's shelter, to go to a needy child come winter time. He'll probably never wear it.

Lesson learned #1: If you're going to insist on knitting a sweater for your child, use good quality, expensive, non-itchy yarn (eg: Malabrigo, MadTosh - I'm looking at you Polly!! I'll be ordering sweater-lots from you in the future! I'm sure you won't mind ;-P)

On Saturday I did some Kool Aid dyeing. I started with some Naked Skeinz that I ordered from Skeinz in Napier (previously known as DesignSpun): 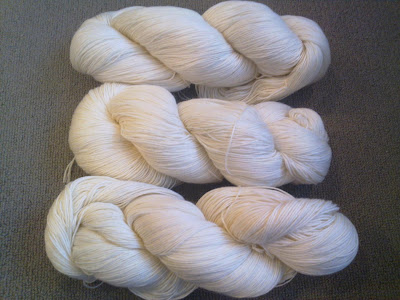 It arrived in three 200g skeins. I reskeined them into 100g lots before dyeing. Using some Grape, Cherry, Berry Blue and Lemonade Kool Aid kindly brought over by my Rav friend Jill last year, I ended up with these four semi-solid skeins: 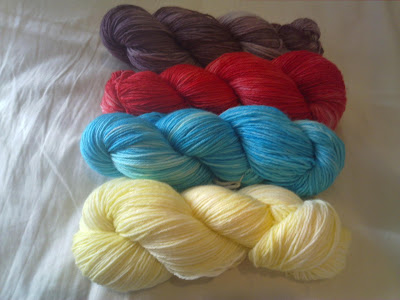 They didn't quite turn out as I expected them to, but I like them anyway. I'm wondering if the semi-solid effect is because I didn't use enough Kool Aid, or because the yarn sucked up the colour so quickly it didn't have a chance to get to all the places it needed to go. The instructions say to heat the yarn/water/Kool Aid in the microwave or stove top until all the colour is gone from the water. When I did it, all the colour was gone from the water pretty much as soon as the yarn hit it! I still heated it anyway to set the colour, but its definitely patchier than I envisaged. I had a lot of fun doing it, and decided to give Orange a go today: 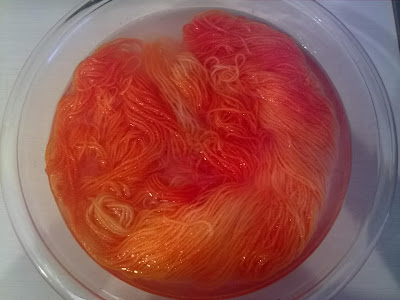 Eye-searingly bright, huh? The reason I was dyeing all this yarn was in order to prepare for Sock Madness, which is due to start in a little over a week - there are several colourwork patterns in the list, which need contrasting colours. With these five skeins, I'm sure I'm gonna end up with some seriously funky socks!!

Lesson learned #2: Kool Aid dyeing is fun, but be careful not to get any on your benchtop - that also soaks up colours, and your landlord may not approve.

While I was waiting for my yarn to dry yesterday, I picked up my Jaden sweater again. The sleeves were proving a little more difficult in that I couldn't wrap my brain around the lace pattern, with the decreases on one of the main pattern rows. After two botched attempts, I decided to draw up a full-sized sleeve chart in order to keep track of the pattern better, and its working perfectly. I'm now over a third of the way through one sleeve, and will hopefully be able to get most of the knitting for this sweater done by the end of the month.

In between dyeing and knitting, I've also had some time to get a little spinning done. I'm still only a quarter of the way through my braid of 'waking up the wolves', but I'm hoping to make a decent dent in the pile, especially since I've promised to bring my wheel to Wednesday knitting next week. It'll make a nice change for me, and everyone there seems keen to see 'spinning in action'. Should be fun! I never get much knitting done there anyway, what with stopping to help all the newbie knitters with patterns, fixing mistakes, yarn choices, cast on questions etc. Spinning is easier to put down and pick back up - there's no 'middle of the row' to worry about!

Lesson learned #4: Don't ever expect to get any knitting done at knitting group, you'll just end up disappointed

Earlier in the week, I received a few parcels in the mail - one was a gigantic conglomeration of knitting goodies and books from Jill in the US: 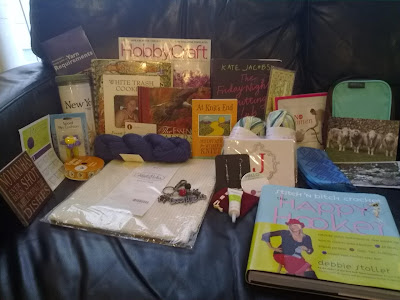 She'd crammed as much as humanly possible into a flatpack box and shipped it over. I was amazed at how much stuff I pulled out! She sent me some awesome books, and a couple for Deane - one of which was titled 'White Trash Cooking'. Hilarious!! There's a number of rather intriguing recipes in there, I wonder if Deane will actually give them a go. Can't promise I'll eat them...

I was spoiled - I got The Friday Night Knitting Club by Kate Jacobs (which, sadly, I've already read, but may pass on to another fellow knitter if you don't mind Jill), Porn for Women, which is chock-full of pictures of men doing housework (heeee!), Stitch 'n Bitch Crochet: The Happy Hooker by Debbie Stoller which is just what I need - I'm always forgetting basic crochet stitches! Now I have a reference book on hand at all times :-) And last but not least - At Knit's End: Meditations for Women Who Knit Too Much by Stephanie Pearl-McPhee (aka The Yarn Harlot). I've already read it, and thoroughly enjoyed it!! Awesome.

I also got two skeins of sport-weight sock yarn (something I didn't have in my stash) and some yummy heathered laceweight yarn, and a Knit Picks sock blank, all ready to dye. Yay!!! There's all sorts of little bits and pieces in there too - spindle earrings (cute!), egg-nog flavoured tea (whaaaat???), post-its, J cards, a book mark, fridge magnets, sheep ribbon, a New York Starbucks travelling coffee mug (always useful!)... so much stuff! I had a lot of fun sifting through the goodies, and will enjoy them all for a long time to come - thanks Jill, you rock :-)

Another parcel I had the pleasure of opening was some gorgeous navy blue lace weight yarn I bought for $8 a skein from (again) Skeinz. 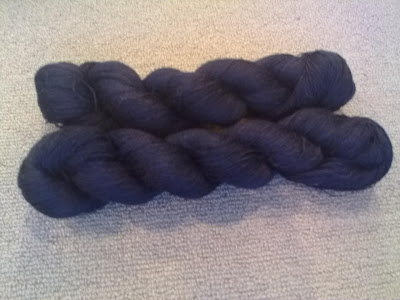 Apparently I broke the 'listing to order' record ;-) They broke the 'order to delivery' record, because I ordered on Wednesday afternoon, and had it in my hot little hands by Thursday morning. Certainly can't complain about the service!! This yarn is being set aside for a specific project (Rav link) that I've been eyeing up for a while, although there's only one finished project on Ravelry (the designer's), and by the sounds of everyone's notes, its a really hard pattern to follow. I'm a little dubious about paying for a pattern that isn't well written and is likely to cause no end of problems. Perhaps I should look for something similar, that's easier to follow...

Lesson learned #5: Always research a pattern before jumping in with both feet - best to know what you're dealing with beforehand. Nobody looks sane while yelling at their knitting.

Well, I've spent far too long yammering away in this blog update, and I haven't even mentioned yet that we went to the Chinese Lantern Festival last night with the boys. It was pretty cool. But Deane took the photos, and I don't know how to work his phone, so I can't post any here.

Lesson learned #6: Make sure your phone is charged before walking out the door.

I have a stack of knitting and spinning to try and get done before Sock Madness consumes my free time, so I must away. Have a good week!!!
Posted by kreachr at 11:23