There are no words that can accurately describe the horror that Canterbury is going through right now, and in fact have had to endure since September 2010. Continuous quakes, damage beyond imagination, and now deaths and serious injury, with many still missing. Its heartbreaking to watch, and yet I find myself unable to look away from the TV whenever the news broadcasts an update. I guess, like everyone, I'm hoping for some good news - somebody found alive under the rubble; a person, previously thought to be missing, showing up unscathed. What is heartening to see is the whole of New Zealand banding together to help out, whether it be cash donations, offering accommodation, food, clothing, blood, whatever. And the amazingly resilient Cantabrians helping each other out - a couple of guys were on Campbell Live last night. They've been working around their neighbourhood digging and building long-drops for their fellow residents. The 10,000-strong 'student army' have mobilised and are getting stuck in, helping wherever they can.

Every little bit helps, the smallest kindness shown can be huge for somebody going through such a horrible, unfathomable situation. I just hope that the quakes stop soon, and the people of Canterbury can start rebuilding their lives. And those few idiotic, unconscionable people that are looting and scamming money will grow a brain and learn a bit of compassion.

It felt wrong to post an update on here about happy things without first acknowledging the Christchurch earthquake, but I'd prefer not to dwell on something that can send even the cheeriest person into fits of depression so please forgive me for moving on...

Sock Madness is nearly upon us knitters crazy enough to sign up, and I have been preparing for the competition as best I can. I'm over half way through the second sleeve for my Jaden sweater (and really, the more I look at the colour, the more I'm convinced the person who named it Aubergine was colour-blind) - I'm going to try very hard to get it done by at least early next week. I'm perfectly well aware that Tuesday will be the 1st March, and I would very much like to have all WIPs out of the way before embarking on SM (please note, that does not say S&M. Perhaps I should refer to it in future as SM5 (Sock Madness 5) just to be clear).

I'm so very close to the end of spinning 'waking up the wolves', and have only about 10 grams or so to go. I think I'll try plying from both ends of a centre-pull ball, as I've heard this method can be quite effective, and there is no wastage. I just hope I don't end up with a giant tangle on my hands. If I do, I promise I'll post pics ;-) What is likely to be very frustrating for me will undoubtedly be entertaining for you!

I knit another Chudley Cannons square (Rav link), and the knitting process and subsequent end-weaving wasn't quite as horrid as I remember it being the first time around, so I may yet knit another eight - the jury's still out on that decision. The swap cut-off isn't until mid April so I still have time.

For a little mini-project (so I could hand in six classes this month for the House Cup) I knit a wee project bag out of some of the 'valentines bouquet' yarn: 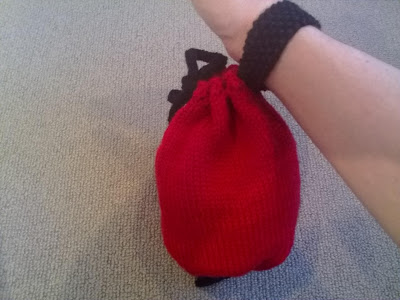 It's called the Knitfit bag (Rav link), designed to be worn around your wrist so you can knit on the go - it may come in handy during SM5 ;-)

Another deadline I have looming is the 'Thai fabrics quilt'. My stitching group from Wellington set a challenge for its members last year, after I brought along the fabrics I bought while in Thailand. Each of them took a two metre piece of fabric, and KJ came up with the idea that we had to make a quilt using this fabric and a 'new to us' technique by Easter 2011. I have finally started on mine. Okay, so all I've really done is washed all the fabrics, ironed them, and cut a bunch of strips, but that's something at least. I've also decided on a block pattern - 'rectangle squared' by Ashley from Film in the Fridge. Yes, its a pretty basic block pattern, but the Thai fabrics are very busy and I thought a simple block with plain white fabric to break up the riot of colours would work well. I have no idea how its actually going to look, but I guess I'll find out once I get my butt moving and start sewing it all together. I made the mistake I always make when quilting - I forgot to buy thread. So until I get my hands on some, the strips of fabric will be sitting, draped over my sewing machine, waiting patiently. Next week, I swear...

And to end this rather haphazard post, something completely unrelated. I was driving home the other day, after picking the boys up from school. As is often the case, I found myself smiling. Why, you ask? Because my son was singing. This is something he does often, and terribly. He changes pitch, is horribly out of tune, and mumbles when he doesn't know the words. Its beautiful, and I love it. I'm very certain in the knowledge that he will never be a famous singer, whether in a band or solo. But I couldn't imagine life without listening to X singing away to himself in the backseat on the short journey home after a busy day at school. I hope you all have something that makes you smile (^_^)
Posted by kreachr at 12:56