We're alive! After seven weeks of school holidays!! I haven't lost the plot (completely) and the boys survived with their eardrums intact.

I sent them off to school this morning, all smiles. My housework is done, I've been to the gym, caught up on grocery shopping, run my errands, and its not even lunch time yet!! Gonna update this here blog, then blob on the couch to knit and watch Desperate Housewives. Yay.

I've started X's sweater (Rav link) - here's a pic of the back, unblocked: 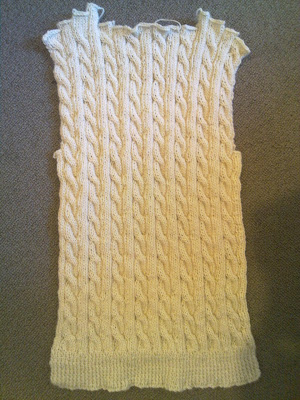 I cast on the front last night, and have done the ribbing and three pattern repeats. Going well so far! This sweater is from the Charmed Knits book, which is full of patterns inspired by the Harry Potter movies - Harry wears this gorgeous red cabled sweater in the first movie. I love it! It doesn't look quite as good in white, but oh well. I've adjusted the pattern slightly to fit X better (hopefully). I was going to make the smallest size, which is the child's medium, but it didn't look like it was going to fit too well around his middle (fat puku!) so I frogged and started again with the child's large size. However, I've shortened the length of it, knitting to 13" before starting the armholes instead of 14", and making the armholes the same size as the medium. I'll have to remember to make medium sized sleeves so they fit in properly later!

I've finished the front of my Jaden sweater, and cast on the sleeves, but haven't got much further with it - it's been put on hold while I knit X's sweater. 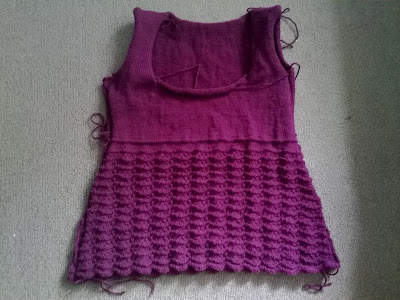 I sometimes think "I've only got the sleeves to go, then I can sew it up and crochet the neck edge and I'll be done", then other times I think "oh God, those seams are going to suck!". I can't decide if there's heaps to go, or not really much at all. I guess I'll carry on with X's sweater and finish it quickly, then concentrate on the Jaden. I'd like to get as much done on these sweaters as possible, because I've done something a little crazy...

I signed up for Sock Madness 5! Sock Madness is a competition that's been run for the previous four years (hence this is SM5). People sign up, then when the competition starts, everyone is sent the first sock pattern via email. The first 160 people to complete the pair of socks makes it through to the next round. These 160 people are split up into four teams, then round two commences. People are knocked out each round until a winner is decided - speed is clearly the key here, and things get a little crazy. It sounds like a lot of fun, and having been chatting with participants online who've competed in previous years, they sound like an awesome bunch of people, who have great senses of humour! There's a bit of a running joke about avoiding being put in the Norwegian team - Norwegians are generally fast knitters, and clearly very dedicated! The last two years in a row a Norwegian has won - in fact, the year before last, the Norwegian lady that won knit her pair of socks in 12 hours!! All her friends came over to her place and kept her fed and full of coffee, keeping her awake and knitting until she finished. Now that's madness!! Clearly I won't be going to quite the same extent, but it'll be fun anyway just seeing how many rounds I can get through before elimination. There are six rounds in total, so I'd like to get to at least round three or four. Once the competition starts (some time in March) I'll keep you posted on my progress :-)

For now though, X's sweater, the couch, and the Desperate Housewives DVDs are calling...
Posted by kreachr at 11:37