Another one bites the dust

I finished my Jaden sweater!!! It looks really pretty :-) I don't though, especially in this photo, which is why I cut off the head, and the photo is slightly elongated: 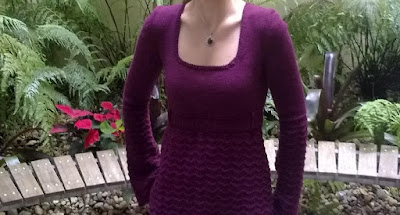 On the plus side, it makes me look taller :-) Oh, and this photo of the back - because you have to see the back, and my ass looks really good ;-P 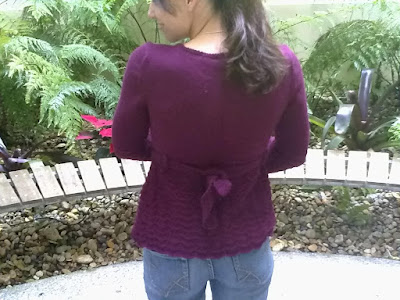 Whaddaya think? I love it! (The sweater, not my ass). Already wore it out on a mini excursion to the library and back, but sadly, had to take it off because it really isn't sweater weather here yet. Still, I look forward to wearing it again soon! In order to finish the sweater, I had to get extra yarn, which I found via Ravelry (See? Best website in the world!!!) A girl in Canada had a skein and a half left, and was willing to part with it. I sent her some yarn and yummy kiwi goodies, and she sent me the Knit Picks yarn and this: 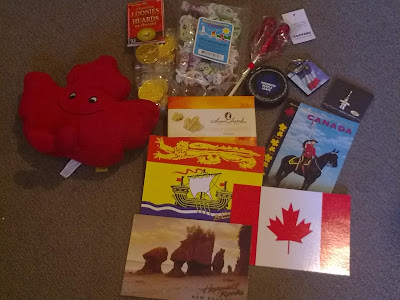 T has adopted the squishy red maple leaf, and keeps pressing it so it will play the Canadian national anthem, which by the way, is really long. I've devoured about half the maple candy already, with a little help from Deane and Shahn. I'm saving the red lobster lollipop and the chocolate hockey puck for now, and I'm waiting for the right time to try the salt water taffy (read: a bit of a wuss, and scared it'll taste nasty). The boys are working their way through the chocolate coins. I love swaps!

I've been working a bit more on my Christchurch shawl, but haven't got too far - it requires concentration, and is definitely not something I can work on while watching TV so only gets picked up occasionally. Plus its at the point now where it takes a while to do a row because they're quite long. I'm loving how its looking though, and the yarn is gooooooorgeous!!!! Merino, silk and cashmere - mmmmmmmmmmmmmmm.

I finished a Jaywalker, and I'm a little over halfway done on the leg of the other - they'll be fraternal socks because the yarn skeins were quite different, such is the nature of hand painted yarns: 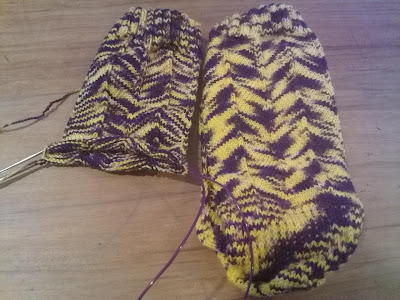 I'm cool with it. If you're ballsy enough to wear ridiculously bright socks, a little difference in pattern isn't going to matter, right? Not sure I mentioned the yarn previously - it's Knitsch in a limited edition colourway, 'Van Gogh'. Kinda reminds me of Perky Nanas though...

Also finished all my squares for the Ron Weasley blanket swap: 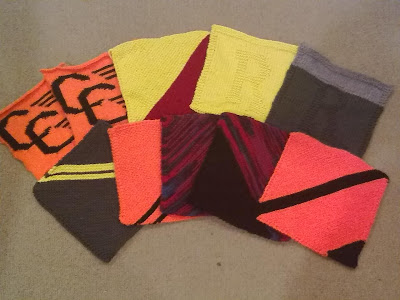 I received the first lot of squares from overseas, along with more goodies: 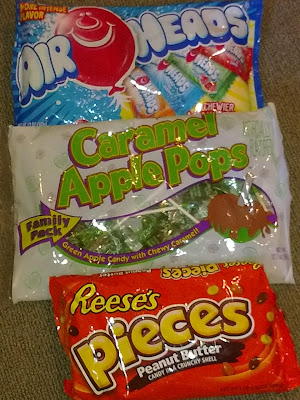 The Reece's Pieces I'm happily fobbing off onto other people (like the Wednesday knitting group at The Little Craft Store) - I'm not really a fan of peanut butter. But the other two are teeth-pulling, jaw-breaking, cavity-inducing delights, that I'm more than happy to munch my way through. Although I will reluctantly share these too ;-) There's about 11 more people left to send their squares in, so I'm starting to wonder just how much junk food I'm going to end up with - perhaps I should try spreading it out a bit, so they last the better part of a year, instead of scoffing it all within a month. I've managed to avoid the dentist quite well so far, don't want to put that in jeopardy...

SM5 is going well - our team finished Round Two a few days ago, and now get to patiently wait for all the other teams to finish so we can move on to Round Three. I'm excited to see what pair of socks will be next - this competition is so much fun!! It may possibly result in an excess of hand knit socks though, perhaps I should find worthy recipients. Of course, they'd all have to have feet that are the same size as mine. My feet are the 'minimum size requirement' for the competition, and there's no way I'm going to knit socks bigger than I have to, especially when the people I'm competing against can knit faster than me!! It's all about speed - that's not to say that quality gets neglected of course. They're still awesomely well made, decent socks (if I do say so myself ;-P). My gift knitting pile is ever increasing - I just have to match gifts made to people in need of one. Now that's the challenging part...
Posted by kreachr at 14:14