I do so enjoy finishing things

Don't you? It's been a fairly productive year so far, and I'm rather enjoying that feeling. I hope it continues for some time. I have plenty of projects to be getting on with!!

But for now, to be added to the finished list: 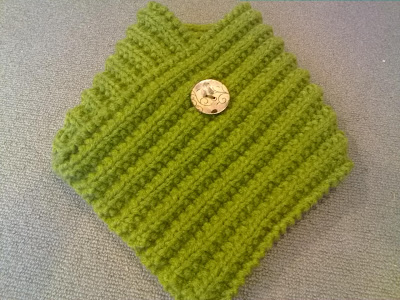 This 'Fear of Commitment' cowl - knit with my green Valentine's Day bouquet yarn. The button can easily be moved to different positions, so the cowl can be worn different ways (see pattern website). 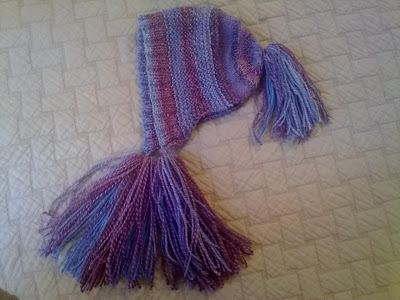 This crazy funky Capucine hat, which will be awesome for winter!

fyi - I have pictures of me wearing both the cowl and the hat (although not together) but I'm not putting them on here, because I look awful and don't want to scare you away ;-)

(And the almost finished list...)
I also knit half a dozen squares for the Ron Weasley blanket swap - only two more to go!!

And I finally got around to blocking my Jaden sweater. I've still got a week left to sew it together and finish the neckline (and possibly the ties). I've had an update on the extra yarn coming from Canada - apparently it got sent back to the sender, because the box was damaged. It has been re-shipped express, and hopefully should arrive soon - fingers crossed!!

I dragged out my poor neglected sewing machine the earlier this week, and whipped up 35 blocks for a cot-sized quilt top: 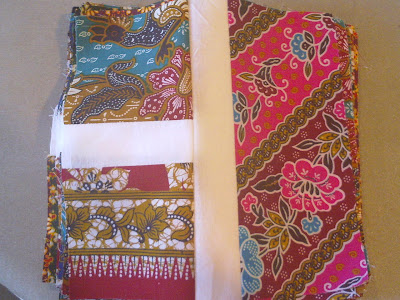 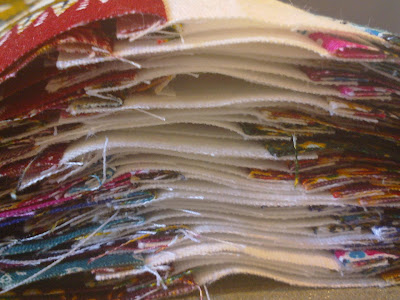 Just the sashing and border to go, and the top will be done. Hopefully next week...

Got some cool mail this week too - the second shipment of the Knitsch yarn club arrived in the mail on Wednesday, and I looooooooove it: 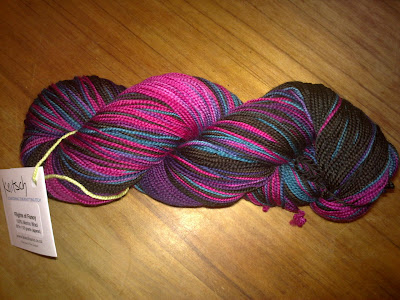 His name is Hansel, and I shall love him, and squish him, and pet him, and stare at him all day. Isn't he preeeeeetty?!?!?

Going by how much Knitsch yarn I have in my stash, it would definitely have to be one of my favourite local yarns, and even better, Tash has opened a shop in Wellington!! The Holland Road Yarn Company. Oh, how I wish we still lived in Wellington... Maybe I could just move into Tash's shop and sleep on the couch there - I know she has one. Do you think she'd mind? Yeah, you're right, she probably would :-( That, and I think the children would start to notice a lack of nutritious meals. Well, at least X would... At best, all I can do is try and find an excuse to organise a trip to Wellington so I can go and visit the shop. And even better, she's stocking a bunch of New Zealand dyers' yarns and fibres, including Maude & Me. Oh dear, I think I may faint...

Speaking of Maude & Me - I got this lovely squishy fibre, for absolutely no reason, completely by surprise in the mail the other week: 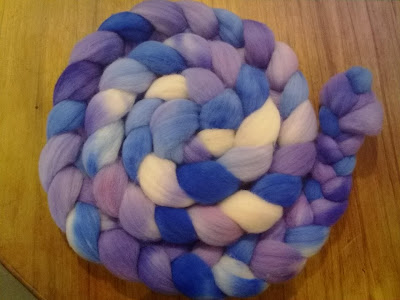 It's gradient dyed, from white through purple and into blue. I know exactly what I'm going to (attempt to) do with it - spin two bobbins, and chain ply them, so I have two skeins of gradient dyed yarn to knit a pair of socks with. The question though is - white toes, blue cuff? Or blue toes, white cuff? Decisions, decisions!

Miss Tracee has organised another one of her spin-alongs, which runs until May. So hopefully I'll be able to get it done before then. Maybe one skein, if not both. Ooh, I love -alongs! Read-alongs, knit-alongs, spin-alongs... any -along will do ;-)

Round One of SM5 is drawing to a close - I believe it finishes some time tomorrow. Hopefully Round Two will start fairly soon afterward - I'm itching to knit some socks! Otherwise, I may be forced to cast on a cardigan, or a shawl...

Have a good weekend everyone!!
Posted by kreachr at 15:56