The Noise of Boys

It is echoing throughout the tiny apartment as I type this update - X has a friend over for the night. They're very boisterous, so I will soon be shoving headphones in my ears and watching a DVD on the laptop, leaving them to play XBox and exclaim loudly to their hearts' content. T has headed off for a sleepover of a different kind, with his Nanny and Poppy in Napier. Deane has a few things to do down there, so decided to take T for a wee trip just because. That suits me just fine, as it gives me time to finish watching season one of The Vampire Diaries. Deane refused to watch it, so I can happily drool over the hotties without receiving filthy sideways looks ;-)

While I watch, I'm knitting a very simple cowl with the green Valentine's Day bouquet yarn Deane got me. Certainly not my first choice of yarn (acrylic and tencel) and not my favourite colour, but I think it'll look pretty good once finished, with a lovely wooden button to hold it together. I must admit, when I got the yarn, I was at a bit of a loss as to what I could do with it. But thanks to the magic of Ravelry, a projects search under the yarn type brought up all sorts of ideas (things people have made with the yarn previously) - and this cowl was made by somebody using the same yarn in a charcoal colour. I thought it looked pretty good, and decided to copy. I'm knitting it doubled, on 6.5mm needles. It's probably going to end up a little shorter than the 33" stated in the pattern, but not by much, and I think it'll still work well. The perfect way to use up all four skeins! I'm well over halfway now, so should have it finished pretty quickly. I'll take a wee trip over to Wild & Woolly Yarns and Cushla's Village Fabrics in Devonport to look for the perfect button next week, and post finished pics. (I would've added a link for W&W, but they don't appear to have a website. Seriously? In this day and age?!? Really...) 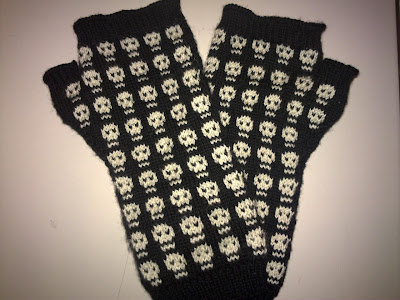 Next on the knitting 'to do' list is the hat I was planning on making with my juicy handspun (from last week). Another small project I can get out of the way relatively quickly (hooray for instant gratification!) that I can also hand in for a class assignment for HPKCHC. I think I've pretty much sorted projects for six classes...

There's only a week left of the first round of Sock Madness, after which everyone with a completed pair of socks will be sorted into teams. Then the real competition begins!! I'm trying to find small projects to cram into the space, as I don't want to cast on anything too big. At least not until I've finished my Jaden sweater - which I still have to block and sew together. I'm waiting on the extra yarn to arrive from Canada still (hopefully it'll be here soon) to finish off the neck, and maybe do the ties as well. Other than the socks for SM5, next on the knitting list is either my handspun cardigan (which I still haven't decided on a pattern for), or a cardigan with the navy blue laceweight yarn I got super cheap from Skeinz. A scarf and some fingerless gloves for Deane need to be done before winter, but there's still plenty of time for that, right? I've been daydreaming about some long fingerless mitts for me, I think maybe black and white striped... Oh, and I'm pretty sure I'm going to need a black hat...

Oops, wait, I still have eight squares to knit for the Ron Weasley blanket swap! And a quilt to sew!! Better get cracking ;-)
Posted by kreachr at 15:41