Running
Yep, still doing it. You thought I'd given up, didn't you? Go on, be honest...

I decided recently that since I was only getting to the gym once or twice a week, I needed to make the visits worthwhile. A 5km run had become 'easy', in that I could complete a run without any problem, and felt that I could have done more. So, I upped the kilometres, and have now run two lots of 7km, and I have a feeling its going to become 'easy' fairly soon. Perhaps I will increase the distance every now and then, building up to 10km. Yeah, 10km sounds like a nice round figure, doesn't it?

Its funny really - if somebody told me two years ago that I would be able to run 10km, I would've laughed in their face. Now? I think I may just be able to do it! Onwards and upwards!!

Spinning
So I went to the beginner spinning class on the weekend, and had a lot of fun! And yes, I did learn some stuff ;-) I learned a completely new method of spinning. The way I was spinning before wasn't necessarily 'wrong', and I will continue using that method, but I was shown a more efficient way of spinning, which makes it easier to keep track of things - eg: number of revolutions per length, which is good to know when you go to ply later. I won't get into too much detail because I'll just bore all the non-spinners who read this blog to death and back, but rest assured I did not waste my time going. I will be learning even more in a few weeks when I go to the second class! Looking forward to it :-) 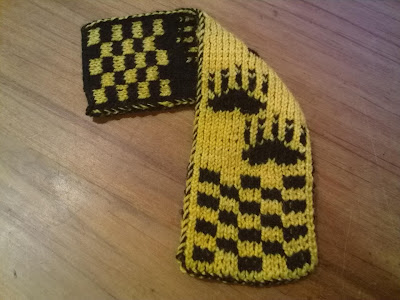 Took me a little while to get the hang of double knitting, but I picked it up eventually. This was a slow project for such a small thing, but I'm happy with it all the same :-) 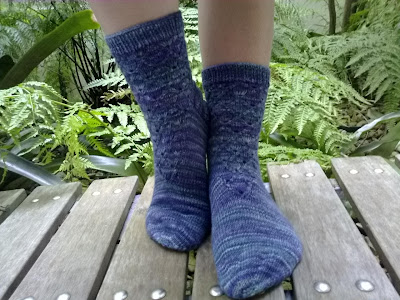 I've been wearing them today, and they're pretty comfy. Mind you, I say that about all my hand knit socks...

I'm back to having only three WIPs now, which is nice. I'm itching to cast on the Round 7 (Rav link) socks though - they're gorgeous! I have a good reason for avoiding casting on (aside from having other stuff to finish of course) - I have a little injury on the index finger of my left hand. A recurring knitting injury that I get when knitting too many socks ;-) A little split, that stings a lot when accidentally stabbed with a needle. So for now, it will have to be a small-scale project I've got on the needles which is a surprise for a friend, and my cardigan, which I really want to get done anyway. Alas, the socks will have to wait :-(

The tiny little mini surprise project had its big reveal the other day, so I can show you what it was now. I told you a little while ago about the unofficial song for Sock Madness, the llama llama duck song. And about the lady that posted a you tube video of it every time the word llama was mentioned in the treehouse. She's having a rough year, so to show our support for her, a whole bunch of Sock Madness members each knit a mini sock with two llamas and a duck on it, and all posted a pic of them on Ravelry in a special thread. We will all be posting our mini socks to the lady as well, so she will have a lasting reminder of how much we all appreciate her. 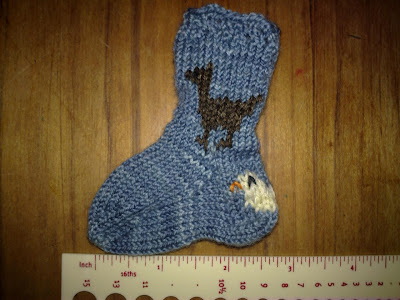 What we did on the weekend
On Saturday, we took a trip out to Mission Bay for lunch, then on to Kelly Tarlton's, which wasn't nearly as sucky as I was led to believe. The penguins were awesome, and the wide variety of fish were fascinating. Not much difference in the variety of species to the Napier Aquarium, but they're always so beautiful, I could watch them swim for hours. They do have a live octopus at the moment, something the Napier aquarium is currently lacking (their octopus died a little while ago, for unknown reasons). And their sting-rays are HUGE!! Horrifically expensive unfortunately, but worth the trip I guess, if you're only going once in a while. The penguins were definitely something I enjoyed, and not something you see every day!

The boys had fun, and it got them out of the house and away from the XBox for a good chunk of the day - a definite bonus ;-) They spent a large part of the rest of the weekend turning their room into a giant tip, so they weren't allowed back on today until the room was tidy. Not kid tidy, my tidy. Surprisingly, they managed it fairly well (or X did at least, T is not the best at tidying. Still plenty of time to work on that though).

All in all a busy weekend, but lots achieved - just the kind of weekend I like :-)
Posted by kreachr at 17:53