Slowing down the crazy train

I poured my heart into the Round 5 socks for Sock Madness, and made it into Round 6 - I took the second-to-last spot on the team (there were only six spots). It took a mammoth effort to get these socks knit - 80 stitches around, knit on 2mm needles. Over 39,000 stitches! Let Me Count the Ways, by Jenny Lee. Its an illusion knit - when you look straight at them, they just look like a weird bunch of stripes that may possibly be something more: 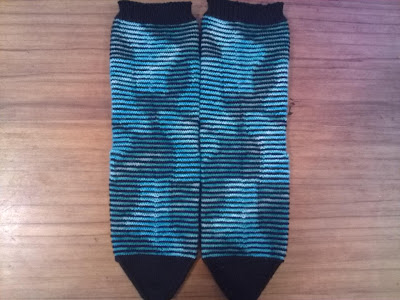 But when you look at them from the right angle, the 'picture' becomes apparent. These socks have lots of little mini socks all around them: 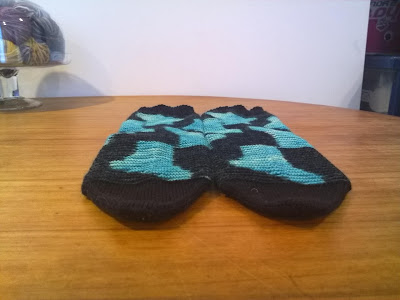 They look great on, too: 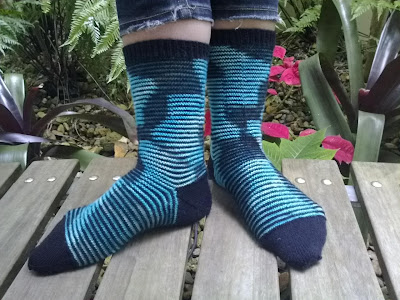 These were knit in Patons Patonyle 4ply sock yarn (black), and some more of my Kool Aid dyed yarn. To give you an idea of just how epic this project was, here's a little run down of how it went:

Bedtime Friday night: 8.30pm (although I didn't fall asleep until somewhere around 11ish)
Pattern Release: 12am Friday/Saturday, which is when I got up and started knitting
Nap: 6.30am - 8am, then back to knitting (1.5 hours)
First Sock Complete: 12am-ish Saturday/Sunday
Sleep: 12.30am - 7am, back to knitting again (6.5 hours)
Next sleep: 3am - 7am, even more knitting! (4 hours)
Second Sock Complete: around 7.20pm Monday evening

Aside from doing some washing, dishes, taking bathroom and meal breaks, the occasional rest to check on other team members' progress, walking to and from knitting group on Sunday and picking the boys up from school on Monday, my entire weekend was consumed by knitting. Amazingly, my hands felt fine at the end of it, and could have quite happily picked up another WIP if I wasn't so tired. It basically took me the entire first 24 hours of the round to knit just one sock. I took more breaks and had more sleep during the knitting of the second sock. But I made it through to the next round, which was my goal (obviously). Now that I have achieved this goal, and far surpassed my first goal set before the competition of reaching the third or fourth round, I can happily knit the Round 6 socks at my leisure. I haven't lost all my sanity, and am perfectly well aware that it would be physically impossible for me to beat the other competitors left in my team. Only one person goes through Round 6, and it certainly won't be me. I'm okay with that.

Now I just have to finish the 'optional' socks, and my 'elimination' socks (once the pattern is released) and the competition will be officially over for me. Its been a fun ride, and absolutely, completely mad, but oh so fun! I wonder if Deane will get upset if I decide to do it again next year? Maybe he'll have forgotten by then...

Round 8 of the Ron Weasley blanket swap is over now too - all the squares have been sent to their new homes, and are due to arrive within the next week or so (depending on the destination). I laid out all my squares the other day: 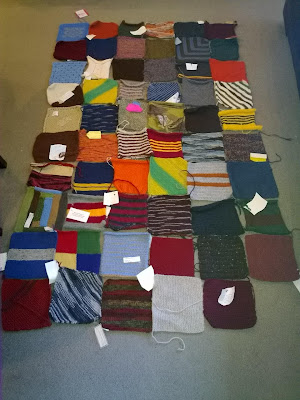 Pretty cool huh? I've decided to do just one more round, so I can add another column of squares down the side to make it just that little bit wider. I won't be running the next round, since this round turned out to be pretty expensive (international shipping is not cheap!!) but there's plenty of keen swappers ready to volunteer, so the next round will begin soon, I'm sure. Should have a finished blanket by the end of the year. Although that will require me sewing all the squares together - something I'm not looking forward to...
Posted by kreachr at 13:42