The city was shrouded in fog this morning. I love fog. Maybe not the densely thick fog that you can't drive through, but the lovely light misty fog is really pretty. You don't really get dense fog in the city anyway.

I had the fun of looking at this cool new table decoration while eating breakfast: 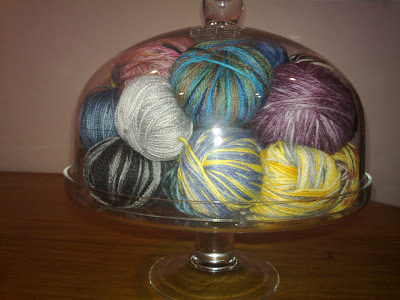 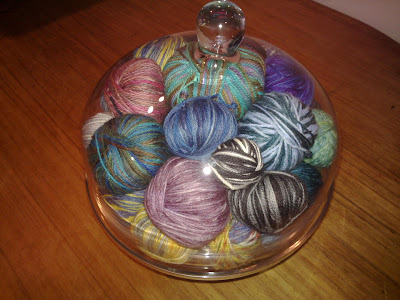 I've been wanting to do this for a while, but couldn't be bothered hand winding all the yarn. Yesterday I was avoiding monster knitting, so pulled out all the leftover bits of sock yarn and got to it. Cool, huh? And the poor cake plate doesn't get used very often - nobody seems to want to eat baking in my house - I think I overdid the baking when I got the cake plate. I decided it had to be full of yummy goodies and sitting on the bench. Deane complained after a while and said it wasn't good for his diet. The kids, although they eat baked goods, seem to prefer commercial crap. Who am I to argue? At least this way, the plate gets put to good use :-)

The courier arrived before 9.30 this morning, bringing yarny goodness: 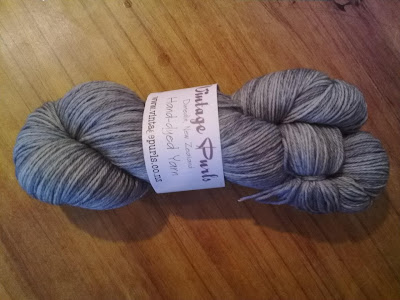 'Hathi' by Vintage Purls, which will eventually become socks for Deane. I bought this yarn, so I could also buy: 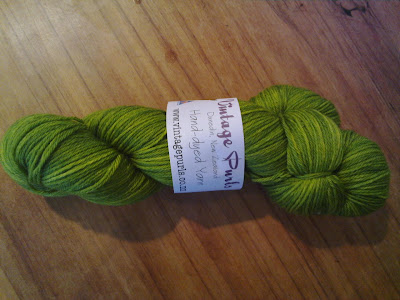 'Tilia', also by Vintage Purls. See, if you ask permission to buy something for the man, you don't necessarily need to mention that you're buying something for yourself as well. When the goods arrive, they make no comment ;-) Its a little trick I learned along the way...

Some more recent arrivals are: 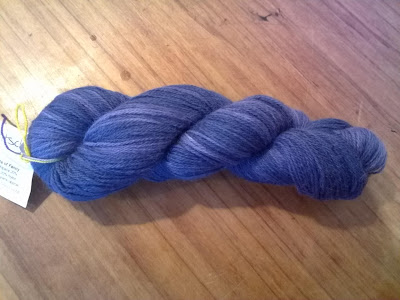 'Dorian' by Knitsch - it was the 'surprise' instalment of the Flights of Fancy yarn club. Not only did it arrive unexpected, its also a new yarn base - 60% alpaca!! Yummy! Perfect timing too, since I'd just knit the Baudelaires with alpaca/merino yarn and decided I just had to have some for myself. However, Dorian will be knit into fingerless mitts. The pattern came with the yarn and I quite like it. Sorry I can't put in a link for you, it hasn't been uploaded yet :-( You'll get to see them eventually though, when I get around to knitting them :-)

Also, something I've wanted for a while now: 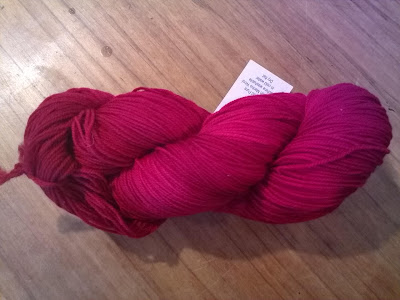 Know what that is? That, my dear friends, is M a l a b r i g o S o c k Y a r n. Oh. My. God. The softness, the colour, the squidginess... I think I may faint... Courtesy of Little Country Wools (bless that woman, she has the best yarns). This was my little reward to myself for getting to Round 5 of Sock Madness. At least that's my excuse and I'm sticking to it!! Now, what to reward myself with if I get to Round Six... just kidding ;-) 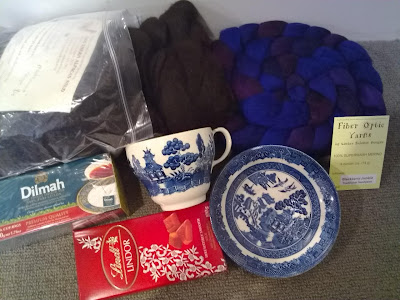 This was so much fun to open - there's the most beautiful merino fibre in an awesomely rich, dark purple that looks super soft from Fibre Optic Yarns. That floofy looking stuff next to it is some gorgeous espresso coloured alpaca fibre from a little guy called Montezuma at Southern Alpacas Stud. The tea is perfect, the chocolate is my favourite, and that tea cup and saucer? How freakin' awesome is that?!?!? Loooove it!! This is definitely a swap I will participate in again - the people are great, and send the coolest stuff :-)

On to knitting now, and today I think I'll knit the legs for this little horror: 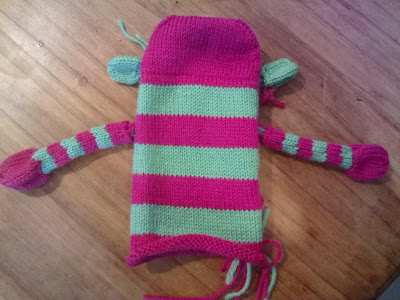 As you can see, I have the body, the arms and the weird little ears done, I just have to do the legs and sew it all together. Needs stuffing though, which will probably have to wait until next week. The yarn is from my favourite LYS - The Little Craft Store. Awesome colours, huh?

I started my Diamonds in the Fluff socks again, as I decided after having got this far: 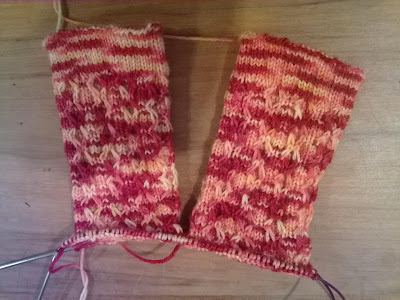 They were just going to be too tight and not at all comfortable to wear :-( This time I'm knitting the medium size (instead of small) with a slightly looser tension. Hopefully it'll work out - I'll let you know.

Another courier just arrived, bringing the last of the blanket squares for the Ron Weasley blanket swap!! Hooray!! Now I get the fun of swapping them all around, and repackaging them to go back to their new homes, where they'll join lots of other knitted squares and become little replica Ron Weasley blankets all over the world. Yay :-) I'm getting close to done with mine, so perhaps I'll have a completed blanket in the next few months to show you - how exciting!!

The boys have had a great first week back at school - T is enjoying his newly built, bigger classroom, and X has signed up for another term of Tuesday lunchtime soccer. He's also running for cross-country every day, and seems to be enjoying it quite a bit. Perhaps he's just a late bloomer when it comes to fitness. Maybe my concerns about him becoming a lazy couch potato in later life are going to be for nothing. Who can say? I'll reserve my judgement for now...
Posted by kreachr at 09:27