A week of small triumphs

Just a few little things that brightened my week:

1. I got X to wear his knitted sweater to school this morning. Even better, he was still wearing it when I picked him up this afternoon!! Score one for the nerdy knitting mum!

2. I got the hang of this double knitting palaver: 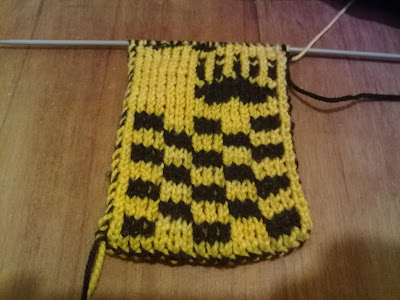 This is one side of a double sided (hence double knitting) book scarf (Rav link) - I've actually knit more since these pictures were taken. The other side is reverse, and looks like this: 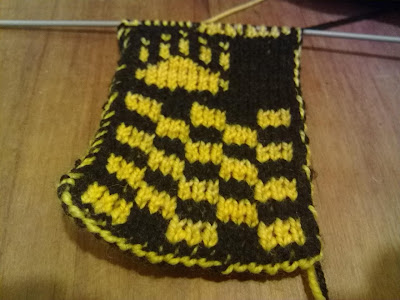 3. I finally finished the quilt I was making for my friend Jane's new baby. No pics yet (because I'm still sewing down the binding - shh! Okay, so it's nearly finished...) but I'll get some tomorrow when I hand it over. She's popping in to the Auckland Handweavers & Spinners Guild Open Day, where I'll be doing a bit of a spinning demonstration (just to show those who are interested that spinners aren't all grannies with decrepit old spinning wheels!)

4. I also managed to start my handspun cardigan, and so far its going okay. The yarn is quite soft and nice to work with (except for the occasional bit of VM) - I'm hoping this will be a really nice, plain cardigan that will get a lot of wear (and fingers crossed it doesn't fall apart!!) 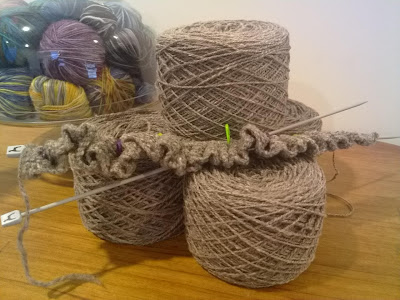 My gauge is off, but I think I can make it work. I'm using 3.25mm needles, although the pattern calls for 3.5mm. I don't have 3.5mm and can't be bothered getting any and starting again, so I'll adjust the pattern as I go. Hopefully it'll work out okay (famous last words!)

5. I had the opportunity to knit a bookscarf that I had once knit before, but gave away. It was for Quidditch in the HPKCHC: 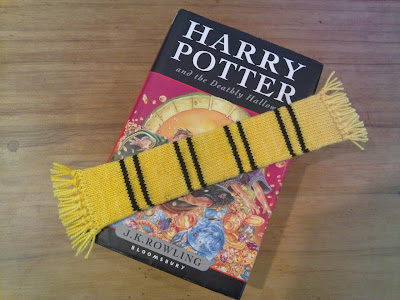 Now I have one of my very own, and I love it!

6. I finished my Diamonds in the Fluff socks (Rav link): 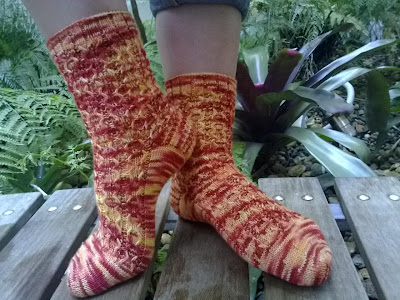 This project was a little bittersweet - I love the socks, and love the colour, but it was one of the last few skeins of Needle Food yarn I have left :-( And then there were two...

7. Cecil(ia) was a hit with my niece - she loves it! Now both my niece and nephew have a special squishy toy to love :-) Its quite fun going to visit every now and then, and being able to walk into their bedrooms and see all the stuff I've made them. They each have a quilt, a cushion, and a soft toy. My nephew has a stripey knit teddy bear to match his crochet blanket I made when he was a baby, and my niece has a wee picture on her wall of her name, that I drew several years back for her birthday. They each got a pair of socks at one point, but I don't think those were quite as popular. Oh well, you can't win all the time, right?

In case you haven't guessed yet, I love making stuff ;-)

8. I managed to finish reading Tome of the Undergates by Sam Sykes. That book felt like it took f o r e v e r!!! It was an okay read, if a little over-descriptive. I've now moved on to Moab is My Washpot by Stephen Fry. Been looking forward to reading this one for a while :-) Next on the list is The Girl Who Kicked the Hornet's Nest by Steig Larsson.

9. It is now officially less than two months until Harry Potter and the Deathly Hallows Part Two hits the cinemas. Oh-Em-Gee!!! CAN'T WAIT!!!