What do they say about best-laid plans?

Mine have been dashed entirely - T was home on Friday with a high temperature, which meant no run, no supermarket shopping, nothing but sitting at home with tissues and paracetamol and pyjamas. Saturday was much the same, but with an extra kid. Sunday, thankfully, went a little better - we got out of the house and went to watch Cars 2, then did a bit of shopping. The boys got some new Star Wars Mighty Beanz, which they were rather pleased with.

Then along comes Monday... both boys are home from school today, T has an awful cough (continuing on from last week's illness that I thought was over and done with - how wrong I was) and X, having battled a headache all day Sunday, has declared himself unfit for school with headache and tummy ache and anything-else-he-can-think-of-to-get-off-school-like-his-brother ache. Food levels are running low, the need to go for a run is ever-increasing... I really hope they're feeling better tomorrow!!

I have managed to get plenty of knitting done though - I've been working on my Christchurch shawl (Rav link), and made fairly good progress. I'm nearly up to the border now: 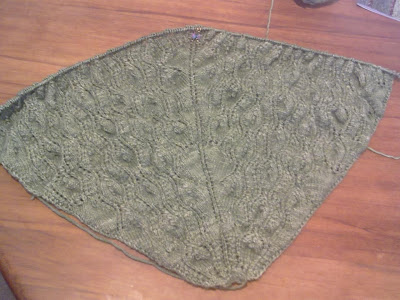 I've also nearly finished another project, it just needs two buttons. Which, of course, will have to wait until I can get out and away from invalid children! Ugh. I am seriously resisting the urge to cast on for the Simplicity cardigan (Rav link), but I think I'll cave in the next couple of days. I'll soon be sick of the high levels of concentration required to knit the shawl, and I'll want something simple to knit, that's easy to cart around. My Pisqu socks do not fill that category, nor does spinning. What can one do, but cast on for a new project?

As predicted, my new handspun cardigan is getting lots of wear, and it will have to be washed soon. I'm going to miss it. I think I'll have to search for some more yarn to make another one...
Posted by kreachr at 08:26