Hello everyone. My name is Jody, and I'm a knitaholic.

It all started back in February 2009, when I bought a ball of Regia sock yarn and some cheap metal 2.75mm dpns from Thimbles & Threads in Upper Hutt, with the encouragement of my friend Margaret, who then taught me how to knit socks. She was so helpful, she even gave me a ball of Opal sock yarn for my next pair. These were worked up in pretty short order, and from there I knew I was hooked. I started surfing the net for hand knitted socks and patterns, and stumbled across a website called Ravelry. This site sounded very intriguing, but needed an invitation to join. So I registered for this invitation and waited patiently for a little over a week, until my invitation to sign up arrived via email. The rest is history really. I was on the slippery slope into fibre oblivion.

I came to this realisation when I took stock of the situation I was currently in:

Three WIPs on the needles - my Pisqu socks, my Simplicity cardigan, and my handspun boot toppers. Not much really. But rather than working on these, I cast on for an Hourglass sweater. The book with the pattern (Last Minute Knitted Gifts) was due back at the library on the 8th August, and I wanted to try and get the sweater done before then so I didn't have to reissue the book. Easily achievable right? Somebody else on Ravelry had managed to knit the sweater in a week...

I happened to have 11 balls of Naturally Aran Tweed in a lovely mid-blue sitting in my stash, having bought it recently to make the Derry Raglan and Cowl from New England Knits (which had been mentioned on Kiwiyarns Knits' blog - I fell in love with it on the spot and decided I just had to knit it). After much hunting around through websites and email sending, I managed to track down an American company that stocked the Karabella Soft Tweed yarn that the original sweater from the book was knit in, who were willing to sell and send me the ten balls of light blue (shade #1310) I required for the sweater and cowl, which left the Aran Tweed available for another project. Fate, right? ;-) So with the boys occupied with XBox and having another official pyjama day (not me though, I'd already dressed), I sat down in front of the laptop, whacked in a Bones DVD, and got to knitting. As of 11pm last night, I had knit through two balls of yarn, and got 9" of the sweater body done: 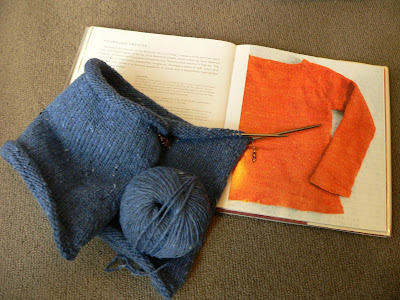 I think I might've been on a high from finishing the Christchurch shawl for Deane's nana: 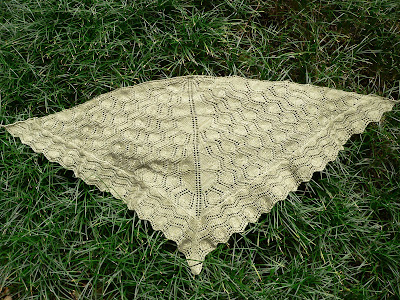 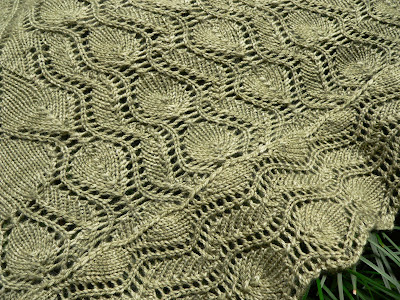 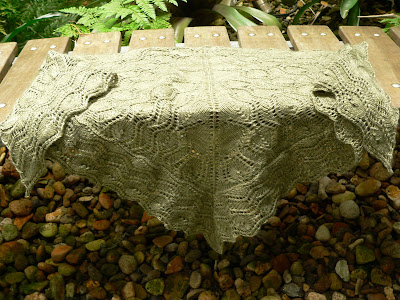 Who could say? All I know is, I need to put myself on a yarn diet. No more yarn purchases. Well, after I've paid for the fibre I ordered from maude & me. And of course, there's still three more instalments due from the Knitsch yarn club. But they're already paid for so it doesn't really count... 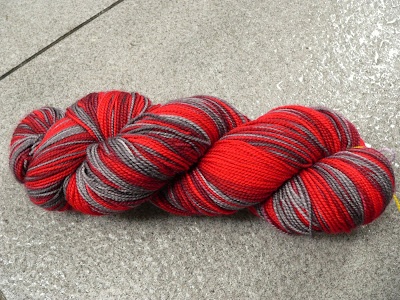 Can't decide what to make with it yet, but never fear, I'll come up with something!! For now though, its hanging out with all my other pretty skeins of sock yarn in a large shopping bag because I ran out of room in my oversized wrought iron fruit bowl. No, my stash is not yet unmanageable - almost every skein of yarn has a project attached to it. If I keep it that way, it will be fine. It will all be okay...
Posted by kreachr at 08:57