Does half a day in pjs mean I'm only half lazy?

Yesterday I decided I was going to falumph around in my jammies just because. We'd spent all day Tuesday at Rainbow's End and tired ourselves out, so I thought a lazy day would be just the thing. Deane had left for Australia at a god-awfully early 4.30am and I hadn't managed to get back to sleep, so wasn't up for much in the way of energetic activity. I also decided that the housework can wait until the boys go back to school, since tidying up now would be a pointless exercise - there's still several days left of the holidays.

My plans were scuppered however, when I realised I would have to take the car to the panelbeaters - Deane had booked it in, and they expected it to be dropped off Wednesday. Poop. It took several hours, but I managed to extract the name and location of the panelbeaters from Deane (who had neglected to tell me before he left), got myself dressed (the kids had dressed themselves voluntarily that morning - guess it was just me being lazy...) and took the car in. Once home, the boys decided they wanted to go into town to get T some model painting gear (yep, I have the nerdiest boys in town).

They then proceeded to spend the rest of the afternoon with heads bent together, working industriously on their little Warhammer models: 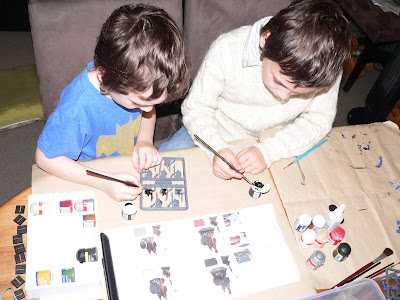 X carrying out his big-brotherly duty and passing on pearls of wisdom to his younger, less experienced brother. It warmed my heart to sit back and observe this wonderful teamwork, and listen to the praise and encouragement flowing from big brother to little brother.

It also gave me time to finish my socks of Squidgy Blue Goodness: 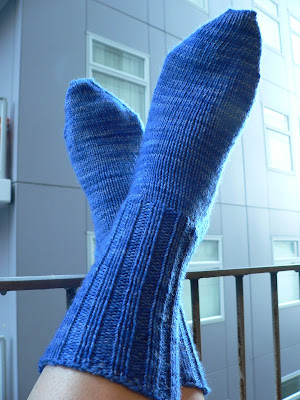 I also have only six pattern repeats left to do on the border of the Christchurch shawl - I'm hoping to have this finished by the end of the day so I can block it. I'm really hanging out to see what it looks like all finished!! Not long to go now...
Posted by kreachr at 08:55