I must be sick

Last night, after having spun for most of the day in an attempt to get this red laceweight finished before the end of the Tour, I decided to sit down and knit something simple and relatively quick. What better than some DK weight plain socks?

I had some yummy new 'Max' yarn from Vintage Purls in a beautiful blue, and had been down to the LYS earlier in the day to buy some Addi Lace 3.25mm circulars. I wound the yarn cakes, cast on using Judy's Magic Cast On, and then...


I couldn't remember how to knit!!! Seriously! I was sitting on the couch, staring at my needles, and couldn't for the life of me remember which side the stitches were supposed to start on, and which direction I was supposed to knit. I was lost for words. I had to get Deane to hand me a WIP so I could study it and figure it out. Needless to say, it all came flooding back and I was able to continue on, but oh my, the fleeting terror was quite something.

I knit the toes, then went to bed. 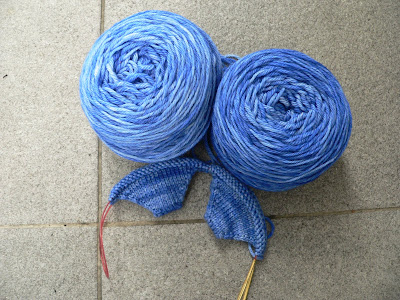 I've had a head cold for the last couple of days, which is unusual for me. What normally happens in this household is the kids get it, and Deane gets it, and 99% of the time, I dodge the cold completely (I pride myself on having an excellent immune system). Not so this time around. The boys have had it, as has Deane, and now me. Its not fun. Apparently it melts your brain. At least I have plenty of mindless stuff to be getting on with - the plain socks (which are now just straight knitting until I get to the heels), and this seemingly-never-ending-but-almost-done-I-think-I-can-make-it laceweight: 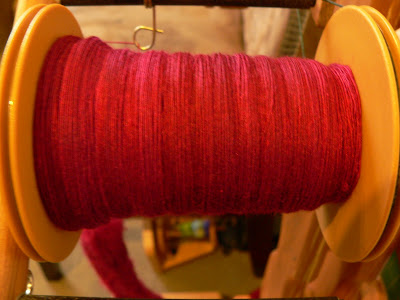 This is a picture of bobbin #2 - I still have about 22g left to spin, which I may or may not manage today. Plying on Sunday I hope (the last day of the Tour).

I have a good excuse (well, sort of) for not doing the housework - I've just had my nails done (we're going to a family wedding on the weekend) so I think I'll be able to get away with general blobbiness today. I'm waiting patiently for T's hoodie to dry - its all finished, and blocking at the moment. He wore it for half a day as soon as I'd finished weaving in the ends - I knit the i-cord and threaded it through the hood casing while he was wearing it he was that keen - so I know it fits, and will probably fit better once blocked. So pictures to come, I promise :-)

I only have ten border repeats left to do on the Christchurch shawl, so that should be finished in the next week or so as well - pictures of that to come soon too! Ooh, how exciting...

We're nearly halfway through the school holidays, and so far, nothing eventful has happened. There was the trip down to Napier on the weekend, and I got to see Harry Potter with my bff. Will definitely be going again. Not just because the movie was so good I have to see it a second time, but also because during the first viewing, the copious amounts of teenagers in the theatre rustling their paper bags, giggling, and exclaiming loudly over plot-lines they clearly knew nothing about because they hadn't read the books kinda ruined the movie a bit. So of course I have to go again ;-) I asked X which movie he'd rather go see - Kung Fu Panda 2 or Harry Potter - sadly, he picked Kung Fu Panda, so I can't use him as an excuse. I'll have to find somebody else to go with. Or I could go by myself. Either way is fine by me :-)

I must dash now, and get stuck in to this spinning if I am to have any hope of finishing it in time - have a good weekend!!
Posted by kreachr at 09:59