Its rather chilly today! Has been for a little while now, and we've had a few thunderstorms (yay!). I was actually starting to wonder if I'd have any use for all of my awesome knitted scarves, hats and mittens. Guess I do ;-)

The Tour de Fleece is chugging away, we're up to Day 11 now. I managed to finish my first 100g of laceweight singles, as evidenced by my super-cool daily collages: 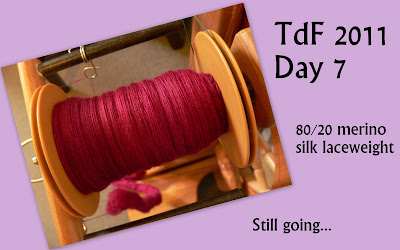 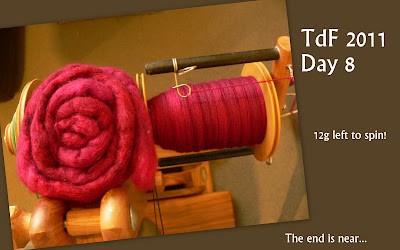 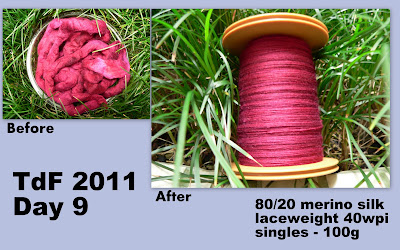 Yesterday, Day 10, was a rest day for both the Tour de Fleece and the Tour de France, so I was busy with all sorts of other things. My friend Polly jinxed me on the weekend, talking about 'Spring cleaning'. Pfft, it isn't even Spring! But, I ended up getting stuck in myself. There's a story behind it though, and it goes a little like this:

On Saturday, the boys were playing building tag with their friend on the 8th floor - its much like normal tag, but they use the entire building (much to the annoyance of fellow residents I'm sure). So of course each of my boys wanted a set of keys so they could get around between floors. I was reluctant to hand over both sets, as Deane has the third set at work (apparently - I'm not holding my breath over that one), and X has a tendency to lose things - like his brand new Cotton On Kids sweatshirt that I'd bought for him, that he wore to school and lost on the first day (grrrr). Deane was all "it'll be fine, just give them the keys", so I handed X the set with the car key, my gym tag, and the mailbox key. "Don't lose them!!" I said. What did he do? Lost them.

He was adamant that he'd brought them home and put them on the dining table, but I searched the entire apartment and couldn't find them anywhere. On Sunday morning I sent him upstairs to his friend's place to look. He came back down with friend in tow, but no keys. I made him walk through all three parking levels with me, looking for them. No luck. I left for knitting group in a slightly non-cheerful mood, deciding to check with the Building Manager on Monday to see if anyone had handed them in.

Monday rolls around, and no, nobody's handed in any keys. The friend's parents had been in advising of the lost keys (before me!) so he said he'd keep an eye out for them.

I went back up to the apartment and literally turned the boys' bedroom into a toy wasteland looking for them again: 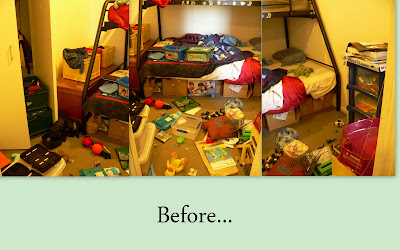 After creating this atrocious mess, I decided I'd better clean it up because I really didn't want to be looking at it all day, and there was no way the boys would clean it up if I helped make it. So I started in, and when I did, I found the keys.

See those Nintendo game cases sitting just inside the doorway, on the clear plastic container to the left? They were under one of the game cases. I was stunned. I'd turned the place upside-down and inside out all weekend, when all I had to do was pick up the games. Ridiculous. Anyway, a good hour or so, and the room looked much better: 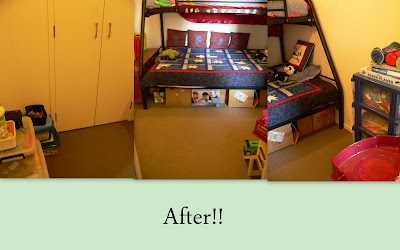 So after I'd wasted half my day on the room and the keys, I managed to find a little bit of time to get stuck into a new project. This one feels like a mini triumph of sorts. T has always refused to wear knitted jerseys, because he can't stand the itch-factor. I think he may have changed his thinking on this slightly though, and I'm not sure how much has to do with X having knitted jerseys that I've made, and how much is just him growing up. About a week ago he asked me to knit him a jersey, "and I promise I'll wear it". I asked if he was sure, and he assured me he was. I was busy doing something at the time so wasn't paying much attention, and the gravity of the situation didn't quite sink in. A few days later, I started thinking about the conversation, and I really couldn't remember whether it was an actual occurrence, or all in my head (you know, wishful thinking...) so I asked him if he wanted me to knit him a jersey. He said "yes, and I promise I'll wear it". Well, I didn't need any more persuasion! Onto Ravelry I hopped, and I dug around a bit until I found a pattern for a hooded jumper. Next was to find the non-itchiest yarn I could think of - what better than Malabrigo Rios? On to Little Country Wools, where I ordered three skeins in T's favourite colour - green. 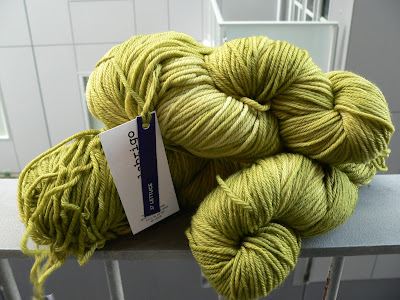 I have to laugh a bit when I'm knitting this hoodie - for the kid who hates vegetables so much, to have something knit in a yarn with the name 'Lettuce', I find it a little comical. I have therefore named this project 'Anti-Salad' ;-)

I only managed to get a little bit done before having to go pick up the boys from school: 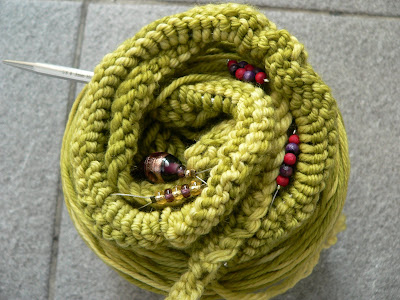 I told T when I picked him up that I had started on his jersey. I'm not sure how fast he thinks knitting grows, but he asked if I'd done the sleeves yet. I had to disappoint him and say no, but I got stuck in last night and managed to get a bit further - enough for him to try it on for fit: 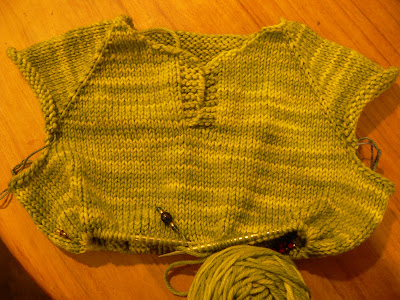 Hopefully I'll be able to get a fair bit more done this afternoon while X is at swimming, and again tonight at knitting group. I'd like for him to be able to wear it next week. If it weren't for the TdF, I might've had it finished by tomorrow night. But my spinning wheel calls, and today is not a rest day - for a change from the (very slow) laceweight, I decided to work on a worsted weight yarn (hopefully, my consistency isn't the best) in a maude & me. colourway, kentucky ave. 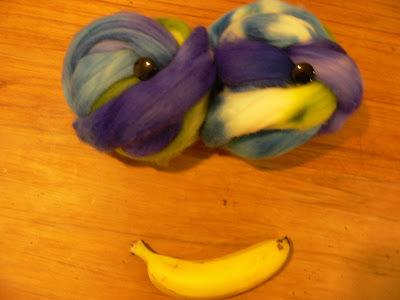 I've finished one bobbin, and I think that'll be it for today. Must work on T's hoodie before he forgets he wanted me to knit it. Next bobbin and plying tomorrow! Then back to the laceweight...

For now though, time to organise X's swimming bag before Deane arrives home with the boys. Have a good week!! And remember, Harry Potter starts on Thursday ;-)
Posted by kreachr at 14:32