I set out, during the Tour de Fleece, to spin 200g of laceweight merino silk yarn. It got very close to the wire (in fact, a little over, but we won't dwell on that) - and I made it!! We got back from Tauranga yesterday afternoon, got the kids sorted, had a really basic dinner, and sent them to bed. Then it was straight into plying the two bobbins of singles I'd managed to finish on Friday night. Six hours later (at a little after midnight, but who's going to check?) I came to the end of one bobbin. Time for bed!

This morning I got up and wound the yarn into skeins, and here is what they look like: 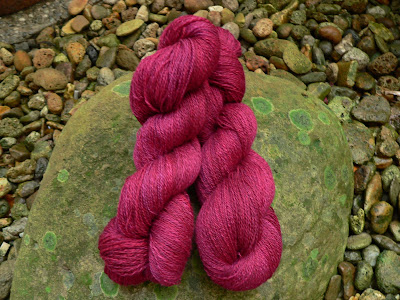 Sooo preeeeeeettyyyyyy!!!! (Picture comical batting eyelashes here). A total of 1,161 metres of merino silk goodness - 193g of two ply heavenly yarn. Beautifully balanced (for once!) and so, so lovely. What on earth am I going to knit with it??? Plenty of time for that though - they're so stunning I'm just going to have to leave them as they are for a while, and admire my handiwork. Yes, I'm that modest ;-)

So the Tour is officially over for another year, and our lone kiwi rider and his US team had a podium finish - hooray! Moving on...

I'm half way through the pair of thick DK socks in the VP Max yarn - unfortunately the heels aren't the flashest, because I was knitting them in the car and during the family barbeque the day after the wedding, and I kept losing count. Still, nobody's going to look too closely (right?) and they look mostly okay. Just the legs to go, and I'll have me a pair of cosy winter socks!! Next on the list, boot toppers!

The wedding in Tauranga was beautiful. The weather held out just long enough for the ceremony and family photos before it started to spit. The bride was gorgeous, the ceremony itself full of laughs, as was the reception, a perfect day. They had the best cake topper I've ever seen: 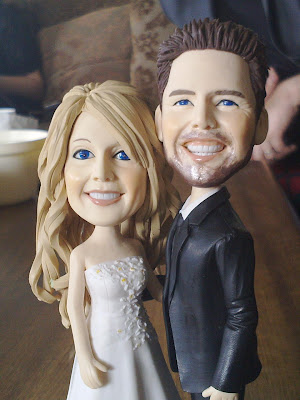 Hand crafted from photos of the bride and groom, they're a fairly accurate likeness (apart from the disproportionately large heads of course ;-P) Go check out this website if you're in the need for a clay figurine of yourself. You never know, might come in handy ;-)

On the subject of cool/cute, found these at a random cafe just out of Tauranga: 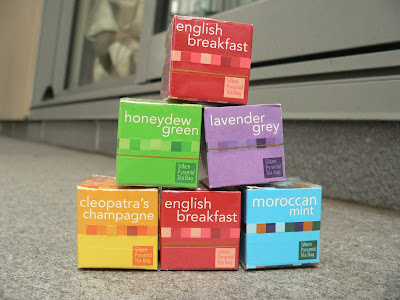 Only a week left of school holidays (yay), and Deane will be away for about half of it (boo). He's off to Australia for work. More time for me to catch up on Supernatural and knit in peace I guess. Less cooking too! Speaking of cooking, better go sort out tonight's dinner. Have a good week people :-) And Happy Birthday mum!

Edited to add: Oops, nearly forgot to show you the finished pics of T's hoodie! He was a dear and posed nicely for photos: 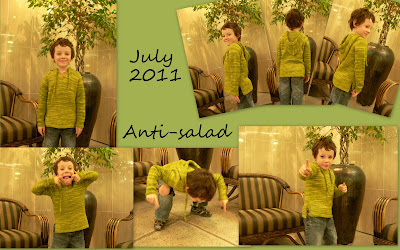 I rather like the end result, as does he. Got plenty of compliments over the weekend for it too, so happy all around! W00t!!
Posted by kreachr at 13:05