It hurts my heart to be stuck in Auckland right now, when I so very much wish I was still in Wellington. The city is blanketed in snow for the first time in many years, and oh it looks so pretty! There is a beautiful video going around at the moment that sums it up nicely - Wellingtonians going about their day in Cuba Mall, when it starts to snow.

Many thanks to Ro Tierney for shooting the video, uploading it, and having one of my favourite songs - Clair de Lune by Claude Debussy - for the soundtrack.

Absolutely magical! I know there are many, many places all over the world, and indeed New Zealand, that gets snow on a regular basis. But for somewhere like Wellington where it is such a rare occurrence, it is definitely something special.

Here in Auckland we had snow flurries, but as soon as the snowflakes touched down, they melted. I still had a chance to enjoy it though - I was at the school library helping to cover books when we had a small flurry right before a hailstorm. The Groundskeeper Mike in all his baldness went out and jumped around like a loonie, and Dale the Librarian took pictures. It was quite something! Definitely a good laugh :-)

So its been a little chilly lately, and I'm thoroughly enjoying all my knits - I have to say that for once, my feet weren't cold at all yesterday. I was wearing my Bug Out socks!! I had spinning at the local Guild, and the room was freezing despite having the heater going (large room, wooden floors, lots of windows, no insulation... you get the idea). I was cold, my hands were cold, and yet my feet were still warm. Quite unusual for me. I had an excellent view of the bowling green, and saw snow flurries and hailstorms aplenty (which probably made me feel a little colder). It was quite weird, because the rain was interspersed with sunny spells. You could actually tell when it was about to rain/hail/snow because you actually felt the temperature drop in the room by several degrees beforehand. Guess the heater wasn't much chop...

I've started spinning my 'Smugglers Cove' pencil roving from Vintage Purls, which will likely become socks. Not sure about it at this stage, don't know if I'm getting enough twist into it for socks - guess I'm too used thicker roving. Still, if it turns out to be too 'woolly', I can always knit something else with it :-) 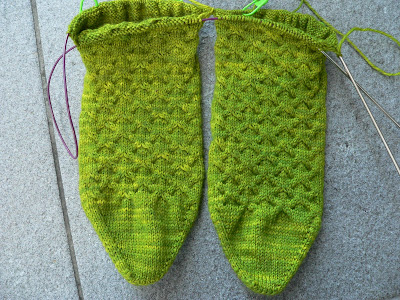 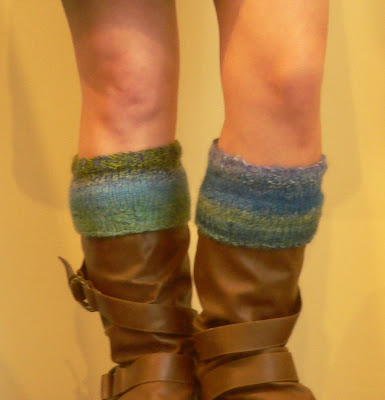 Excuse my knobbly knees :-) These were knit in my handspun 'kentucky ave' polwarth from maude & me. I even have enough left over for some matching fingerless mitts - yay!!

Well, its 1pm here, and I'd like to watch an episode or two of Bones before I have to pick the boys up from school, so I must dash. Hope you're enjoying your weather, wherever you are!!
Posted by kreachr at 09:50