Mind ever-changing, patience of a squirrel in Autumn

You know how last week I said I really wanted to cast on some socks? Well, I did, but not the ones I originally intended. Instead of casting on Toxic socks, I went on a hunt, tracked down a digital copy of Yarn Forward issue #26 from July 2010, and cast on a pair of Danu socks instead. Few people (on Ravelry at least) have made these socks - whether its because the pattern was published in a magazine, or because they're knit on 2.25mm needles with 80 stitches around I can't really say, but they're lovely socks, and I'm glad I decided to make them.

I've been a member of Sock Knitters Anonymous on Ravelry for some time now, but almost never participate in the monthly Sockdown Challenge, for various reasons. They've just started a new cycle of the Challenge though, and I was determined to join in! So with the designers for the month of September named, I spent most of the month um-ing and ah-ing over what socks I would make, and whether or not I would actually have time to knit them, before I finally decided on the Danu pattern. Of course, looking at the picture, they look like fairly simple socks. It wasn't until I'd purchased the online copy and printed the pattern that I realised they were knit on small needles with lots of stitches. I will not be deterred though, and have managed to get through six pattern repeats on the legs so far: 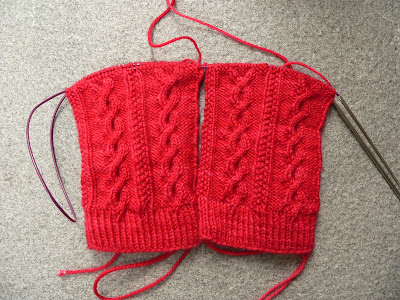 And the yarn? Oh, the yarn!! Malabrigo Sock in Ravelry Red. Simply stunning!! The more I knit with it, the more I want to buy skeins and skeins of it to make anything and everything!! Of course, the budget will not allow it, but dude, its good stuff! And the colour is just gorgeous. I'm going to love these socks for ever and ever and hug them and kiss them and marry them. Oh wait, I don't think you're allowed to marry inanimate objects... Oh well, I guess Deane will suffice, and I can just wear the socks :-) I have until the end of October to finish these (which I'm sure will be no problem at all) and I will enter the draw along with hundreds of other crazy sock knitters to win a prize. The odds aren't in my favour, but on the plus side, I get a cool pair of socks! I've already picked out the pair I'm going to knit for October - they look much simpler. Its Tea Time socks, which I think I'll knit in the September Knitsch Flights of Fancy Yarn Club colourway: 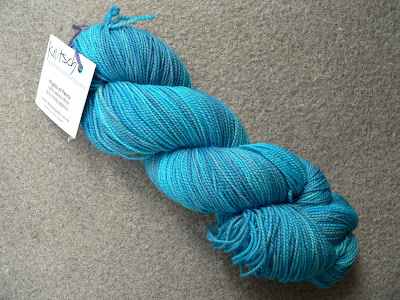 Isn't it a beautiful blue? Its called Cook's Beach. LOVE it!!

In other knitting news...

My poor, neglected Simplicity cardigan has one sleeve done. It only took me a couple of days, so I know the other sleeve will only take me a couple of days as well, then I can block it and wear it, but I've been sidetracked by socks, and blanket squares, and a cabled afghan. I'm on the last square of ten, but me being the impatient wee thing that I am, blocked the squares and sent them off before remembering to take a picture!! And I sent them to the wrong address! The person I sent them to participated in the last round, and I still had her address (or so I thought) so I posted them off, only to discover she moved last month - oops. Hopefully she'll be able to arrange something at her end to get a hold of the parcel. Way to go, Jody... I'll post a pic of the last square when its done though - this one is being knit with Vintage yarn again, in Porcelain and Port Wine.

The afghan is coming along nicely - I'm over quarter of the way through the first panel so far: 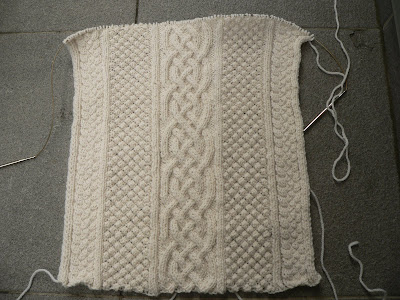 I'm knitting it in John Q Mia yarn I bought a couple of years ago from Knit World in Wellington, for something ridiculous like $2.30 or $2.80 a ball (can't quite remember now). The afghan will take around 40 balls of yarn, so I'm glad I got it at a good price. Its not the flashest yarn around, but it is remarkably soft, and I quite like working with it, even with the slight hint of sheepy smell it has.

I managed to drag out my sewing machine yesterday too, for a bit of a change of pace. I got the most awesome swap package in the mail the other day: 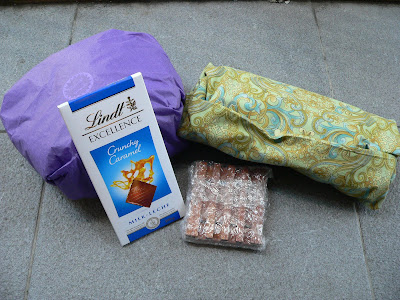 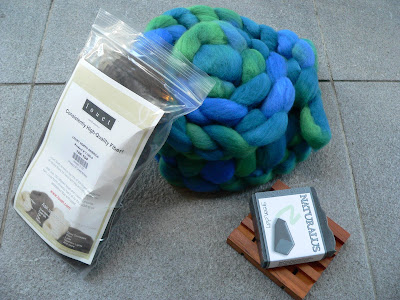 OMG look at that fibre!!! Yummy!! And dude, the brown fibre in that little bag there? It's yak! Yes, YAK!! Wow!!!! Anyway, the fibre was wrapped in some really nice fabric, which was the perfect amount for a box bag - something I've always wanted. So I hunted out a tutorial on the interwebs (amazing place, this internet thing), and away I went. I also dug out some neat fabric from my stash, that my friend Margaret had given me a little while back - perfect for a knitting project bag. So after a few hours sewing, I ended up with two (slightly wonky, but who's looking that closely?) box bags: 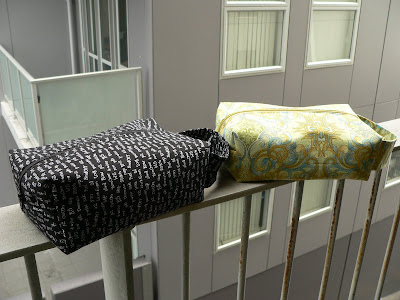 This one I'm going to keep for myself, because the fabric is beautiful: 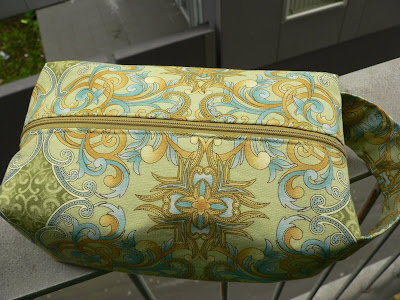 And this one, I have an idea for: 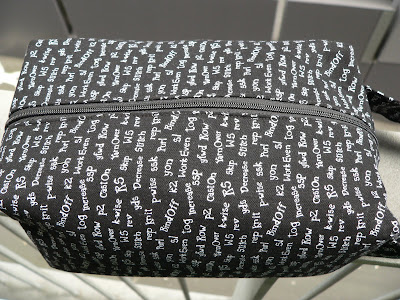 I have enough interfacing for one more, I just have to get another zip. And have a good ol' dig through the stash to find the perfect piece of fabric :-) The size of the bag is perfect for a pair of socks-in-progress, but they can be used for other things as well. Me? I think I'll use mine for socks. Of course ;-)

Gosh, time has flown yet again, and its time to pick the boys up from school (oops, so much for doing the housework...) Hope you're having a good week!!
Posted by kreachr at 13:27