Since declaring that I was going on a yarn diet on or around the 29th July, I have spent a little over $400 on yarn, fibre and needles. In my defense, over half was spent at KAN which totally shouldn't count, and about $66 worth was for a swap, which also shouldn't count. So really, I've only spent about $100. Not bad for two months' worth, huh? Think of the investment! ;-) (Us yarnies are really good at justifying purchases of the fibery kind).

The blanket squares for the Ron Weasley swap are coming along nicely - I blocked the first five, and here's a wee pic: 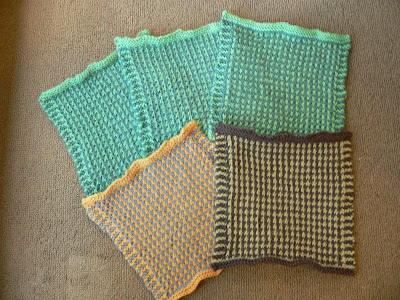 The top three are knit using some green Naturally Loyal left over from knitting Cecil(ia), and the darker green was a ball of Skeinz Prism yarn that was in my KAN goodie bag. The other two were knit using the Vintage yarn I bought from The Little Craft Store last week. The pattern is deceptively easy - you only knit with one colour at a time, and its a simple slipped stitch pattern that any beginner knitter can do. I've knit another 2 1/2 squares since, and should have them done in time for send out, the date for which has been extended to the 8th October. Yay! Gosh, its hard to believe its nearly October already!! OMG, I'm going to be 32 in under three weeks...

Let's not get sidetracked though. I finished the Rick socks I was knitting in the Knitsch Kelly yarn: 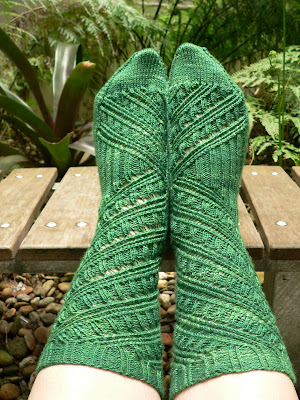 Love them! Don't have skinny enough legs!! Good thing they're already assigned as a Christmas present ;-) After I'd bound these off, I found myself with a lonely two works-in-progress. I knew the blanket squares would be finished soon, so I wanted to cast something else on. Of course, I have the problem of wanting to KNIT ALL THE THINGS so I couldn't decide between Toxic socks which would look seriously awesome in the bright pink Wollmeise and black sock yarn I have in my stash, or the Burridge Lake Aran Afghan that I've had on my to-do list for about two years. It finally came down to the fact that I had the afghan yarn in stash taking up valuable storage space in the spare room, plus the pattern already corrected with errata on hand. So cast on the afghan I did. I haven't got far because, seriously, this thing takes concentration!! Cables cables everywhere! All at different stages! Oh, the fun I will have!! I was hoping (because apparently I'm crazy) that I could get this done by Christmas, because it is supposed to be another present (ever since I first decided to make the thing, it was going to be a gift. I just never got around to it). We shall see how it goes...

I have the feeling though, that the Toxic socks will be cast on soon. They're just too awesome to wait for long. The afghan isn't the kind of project you can cart around, my squares will be done soon, and I'm avoiding the sleeves on my Simplicity cardigan (although I'm not sure why...) Did I mention, I want to KNIT ALL THE THINGS?!?!?!?

I really should just dive in and knit those darned sleeves. It's silly to put them off. We're coming into Spring now, and I'll want to wear that cardigan soon. No excuses really. Perhaps I'll finish the squares first, then the sleeves. Hmm.

Speaking of putting things off, I've been avoiding road running for a while, and working myself up into a lather about the impending quarter marathon I stupidly signed up for several months back. It's at the end of October, which is arriving at a fair rate of knots. I've gone a little soft, and have been sticking to treadmill running because its easier. Well, this morning I bit the bullet, and went for a run along Quay Street/Tamaki Drive - a popular waterfront running route. Turns out I had nothing to worry about!! I had no problems, an ran a nice 9.36km at a fairly easy pace in a little under an hour. I don't think I'll have any issues running an extra kilometre or so come race time. As I like to say (and it makes X laugh every time) - piece of piss! I can do this quarter marathon - bring it on!! And just think, when I've finished, I can reward myself with a nice, hefty yarn purchase ;-p Ooh, what shall I buy myself for my birthday? (Or rather, tell Deane what to buy for my birthday). A couple of skeins of Fibre Co. yarn, or a skein of Sweet Georgia from Little Country Wools? The Sweet Georgia just because it is gooooorgeous, and the Fibre Co. yarn because I want to make this hat and OMG that yarn is squidgy soft! A few skeins of TouchYarns Merino Possum so I can knit the Mandel sweater? A subscription to a knitting magazine? Perhaps I should start leaving hints around the place now...
Posted by kreachr at 11:01