We're well over halfway through the school holidays, and I'm managing to hold it together. I started out this time around with a bunch of activities written onto little cards. They were thrown into a bag, and every morning the bag would be shaken up and one of the boys would grab a card out. The rule is that we have to do whatever activity is on the card, whether they want to or not. I was nice, and included a few XBox days for them (it's always best to avoid meltdowns, non?). The first Monday of the holidays was officially a bum-around day, because they'd stayed up late the night before to watch the All Blacks play Argentina in the quarter-finals. The rest of the first week ended up being almost all XBox days as well, although we did get a baking day - they made biscuits with mini M&Ms on them - and on the weekend we took them ice skating.

They had so much fun ice skating, they wanted to go again the next day! In fact, they're still asking if they can go again. Maybe we'll have a couple of ice hockey players in the future... ;-) Deane would be happy! Perhaps next holidays I'll sign them up for some lessons. They started out scooting around with frames, so they didn't arse over too badly, and by the end of the session, they were both able to shimmy across the ice without them. T was a little clingy with his frame, but gave it a go (without holding a hand too!) and did surprisingly well. I was certainly impressed. I rather like that they make such small ice skating boots - they're so cute!!

I don't know if you've ever noticed while ice skating, that by the end of a session, there's all these little spots of blood in various places around the rink - inexperienced skaters falling over and injuring themselves. Thankfully I've not yet done this (although I've seen Deane fall over many times while showing off - quite a laugh I have to say) - but there's always a first time, right? Ice skating is fun, and a great excuse to get out the woolly hats and mitts :-)

This week we went out to a place called Crystal Mountain. I'd never heard of it, but a work colleague of Deane's had told him about it, and said it wasn't bad for a day's outing. So we went out and had a look. To be honest, I was a little dubious when I pulled into the car park - the place looks really run down. All the grounds are overgrown around the outside, the fences and gates look about ready to fall over, and when you pull up it looks rather sparse. But we went in and paid our admission fees, and started with the crystal museum, which they've set up under the main building. You take an elevator down (80 metres, according to the light panel in the elevator car) and walk into what looks like a cave, chock-full of natural rock crystals of every size and shape - amethyst, rose quartz, lapis lazuli, hematite, agate... there's even petrified wood, dinosaur bones and fossilised insects. I found it quite fascinating - particularly the desert roses - though the kids were only mildly interested. Still, they walked around (looking for kryptonite, which we didn't find) and pretended they were in the home of a really smart cave man, who had invented the elevator.

Once we'd seen everything in the museum, we headed back up and got stuck in to the activities - trampoline bungy, pony rides, a roller coaster, train, feeding the animals (llamas, alpacas, lambs, goats, peacocks and peahens, chickens galore, roosters, a turkey, ducks, rabbits, guinea pigs, emus, horses, probably some others that I can't remember...) - they had a great time. We went on the roller coaster twice, they rode the horses at least three times each, and I lost count of how many times they went on the trampoline bungy. X was very proud of completing a total of 22 back flips! Somewhere in the middle we had some lunch, and they drew a picture (paper and crayons supplied - hurrah!). We were there for about 3 1/2 hours, and could have stayed longer if I'd allowed them more roller coaster rides, pony rides, and bounces on the trampolines. Not the flashiest theme park, but good for a day of children's entertainment that won't have them bouncing off the walls.

Yesterday we went swimming at West Wave, before dropping Deane at the airport. By the time we got home and I got them to bed, it was quite late, so it's probably a good thing they've pulled another XBox day out of the bag today (I'm sure there weren't that many to start with!!) - fine by me, I have knitting and reading to be getting on with ;-)

I was so excited about getting my Kindle, Hedwig, that I started knitting covers for her that very afternoon. She now has two (plus the neoprene cover she came with): 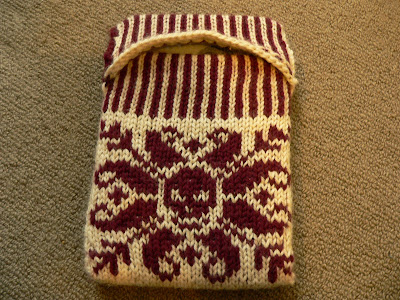 Hedwig's Sleeping Bag, knit with some Vintage yarn left over from the Ron Weasley blanket squares. I had to adjust this pattern a bit to make it longer, as the original pattern appears to be made for a smaller version. The width was fine, but the length was way too short - I added 12 rows of the stripes at the top, and it still could have been longer. Still, I quite like it.

Not happy with just one cover, I made another one, again with leftover yarn in my stash - from my blue sweater, and some white aran weight from my Lupin scarf: 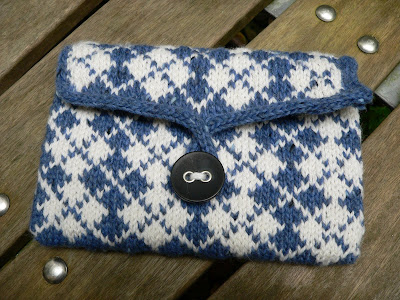 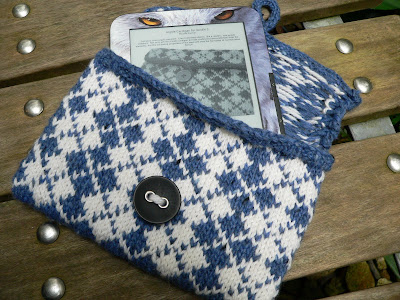 Hedwig's Argyle Pyjamas! The fit is much better, so I know the pattern is written for this size Kindle (of course, it didn't occur to me until I saw the pattern name that there would be different versions of Kindles, and they could quite possibly be different sizes... never mind). I may block this to get the corner of the cover flap to sit properly, but I like it all the same. Rather stylish, don't you think?

I've also been knitting more on the Epic Aran Afghan (only 6 1/2 repeats left on the first panel!!!) and some socks as well: 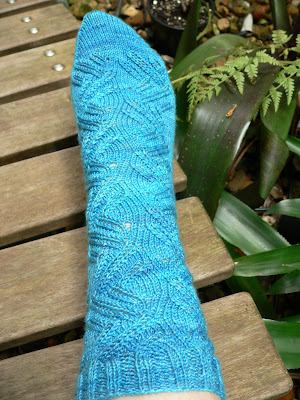 The first sock of the pair - Gretya - knit in Knitsch 'Cook's Beach' (yarn club colour). I was going to knit a pair of gansey socks in this yarn, but the pattern didn't really show because of the twist of the yarn and the slight variegation, so I picked this pattern instead, and I'm glad I did. It's a nice pattern, and very quick to work up. The second sock should only take a couple of days to knock out but I'd like to get some more done on the afghan first.

Although I keep getting distracted by books - I read the first Nikki Heat novel (which Deane had kindly loaded onto Hedwig). I thoroughly enjoyed it, and want to read the other two, but feel I should read the two library books I have in my possession first. So I'm currently reading The World House by Guy Adams. This dude must have a seriously warped mind!! It's quite an interesting read (although the editing is a little unfortunate - there's a number typos throughout the book). I find myself wanting to keep reading to see what happens (which I suppose is the point of a story). Next on the list is Quite Ugly One Morning by Christopher Brookmyre. I remember somebody recommending it some time ago as a good read, so I'll give it a go.

Right now though, I have to get the boys cleaning up the lounge, and I have to get dressed (sitting here in my bath robe - not a good look). Enjoy the rest of your week!! Only six more sleeps before school is back (Labour Day next Monday, an extra day off school - ugh).
Posted by kreachr at 09:20