The race is run, and I'm still here

What an experience. We had Indian for dinner on Saturday night (my idea) - it was yummy, as usual, but I did not feel well later that evening, though I couldn't decide if it was the food or nerves. I ended up having to take a couple of ginger capsules to deal with the nausea and went to bed early. I woke up at 5.30am Sunday morning, got out of bed, and only managed one piece of toast for breakfast. No cup of tea, just a small glass of water. Not the best breakfast before a race. Got myself all geared up and wandered down to the start line for the Quarter Marathon.

Thankfully, it wasn't too cold, as standing around for ten minutes with just a singlet on at 6.40am isn't all that fun. It was interesting listening to the pre-race chatter from other participants who were clearly with a friend or in a group. Discussions on what music to listen to during the race ('Eye of the Tiger' on repeat was one guy's idea of motivation. I'm 90% certain he was joking), how far they'd run before, who dragged them into signing up for it, etc etc. Then the race started, and the chatter turned to near silence.

The sound of thousands of feet hitting the road over and over again all around you is quite something.

I felt pretty good running the race, and knew my pace was steady. It was just before I hit the 4km mark when the race leaders started flying past on their way back to the finish line. I started counting (just for something to do, since I hadn't brought along my iPod) and lost count somewhere around 185 - they were coming too thick and fast after that. A little while later I swung around the halfway mark and started heading back. I was feeling good, so I think I may have picked up the pace just a little - I could see some people up ahead of me that where a little bit closer earlier on in the race, and I thought it would be nice to be able to keep up with them as they seemed to be setting a good, easy pace.

I think it was around about 6km or 7km when we saw the first full marathoner running along the road - he got a large round of applause from us measley quarter-marathoners. I gave a wee clap to all the full and half marathoners that ran past us, until about the 20th or 30th runner - by then I was a bit sick of clapping while running. After a while, I noticed there was a lady who appeared to be keeping pace with me. If she got a little ahead and realised, she'd slow down a bit. When she saw me approaching out of the corner of her eye, she'd speed up just a little. Some time after the 9km mark she looked over and asked what the race distance was, and I told her - 10.55km. Well, if I'm honest, I actually said "10.3km, but mine's a little out". Then realised she was talking about the race distance, not what my sportband said, and replied "oh, you mean the race! 10.55km". She probably thought I was a bit looney.

Unfortunately, it was about 300m from the end of the race that my energy was running at its lowest, and I was in danger of passing out. When everybody was digging in for their big strong finish, I had to slow down, out of fear of vomiting or flaking, whichever came first. I kept going though, determined to finish at a run, not a walk. I tried to keep an eye out to see if there was anybody cheering me on - sadly, there was not. Oh well. I crossed the finish line with an official time of 1:05:08 - 544th place overall (out of 1,689 finishers) and 240th female across the line (out of 1,041). Not bad for a first-timer, who wasn't feeling 100%. The lady who'd kept pace with me for the last third of the race came up and said "thanks for setting the pace for me" to which I mumbled an inarticulate "huhyahmsrigh", or something to that effect. I passed on the banana and bottle of water, still battling the black fuzziness at the edges of my vision, and walked through to the area set up for removing and returning the timer tags. It was about then that I remembered to press the stop button on my sportband (oops! According to Nike, I ran 11.03km in one hour, six minutes, with a severe drop-off in speed at the end). I sat down, removed my tag, dropped it in the bucket, and headed through the exit arch, grabbing a bottle of Powerade Isotonic on the way. Then I walked home.

I hadn't brought my keys with me, so I had to buzz the apartment. Deane sent X down to let me in, who told me to wait outside the door. After several minutes, the door opened, and Queen's 'We Are the Champions' was playing on the laptop. Deane had set up a 'finish line' across the kitchen for me to run through. Wally.

I went straight to the shower, then we finished packing our suitcase and jumped in the car. Six hours later, we arrived at Cooper's Beach, in Doubtless Bay. We stayed in a lovely apartment right on the beach 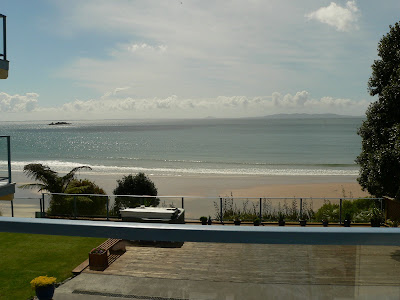 View from the downstairs deck

Where the kids built sand castles 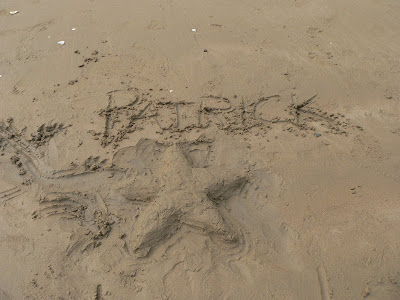 and I made starfish (but no sponges) 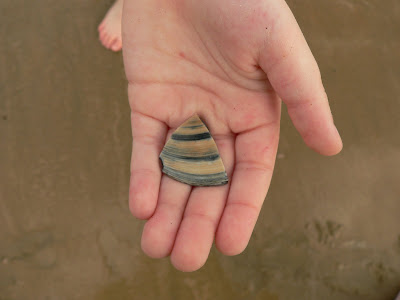 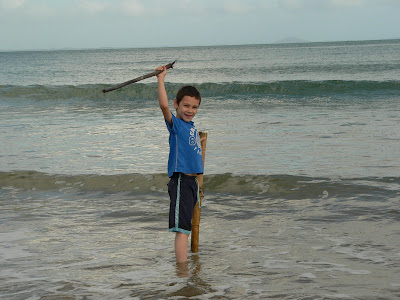 There was a bit of exploring too 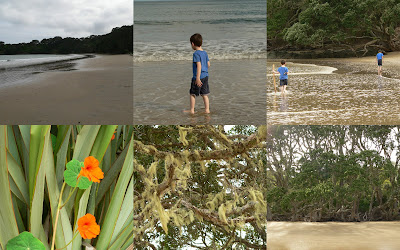 X played a game of chess with Deane that took two and a half days, and I read the rest of Snuff by Terry Pratchett, all of The Vampyre; A Tale by John William Polidori and Honeymooning by Rachael Herron, some of Big White Panties by Dale Alderman and Shattered by Sophia Sharp before deciding they were crap and starting on Naked Heat by Richard Castle. I only knit a few inches on my handspun socks though. It was a nice, relaxing few days.

We're back home now, T's fully recovered from his bout of chicken pox, and X is showing no signs of them yet. I feel much better, and keen to get back into the swing of things. School tomorrow - hurrah!!! Oh God, it's already November...
Posted by kreachr at 15:21