Trying my best not to hyperventilate...

Only four more sleeps until the quarter marathon!! I've printed out my official eticket, and I can go and pick up my t-shirt, timing tag and gear bag tomorrow, when registration opens at noon. OMGOMGOMG..... deep breaths...

School started back yesterday, but I still have one kid at home. The poor thing is absolutely covered from head to toe (literally) in chicken pox. I'm sure it will only be a matter of time before the other one suffers the same fate. Oh, the joys of childhood disease. Thankfully (I think) I'm in the clear - I had chicken pox as a child, as did Deane. So unless this is some awful mutant strain that we are not immune to, we should be okay. The XBox has done a surprisingly good job of distracting T from scratching, but he can't be on it 24/7 so he has managed to do a bit of damage. And he scratches in his sleep. A lot. What can you do?

Having a child (or in the case of last week, children) at home has given me plenty of knitting time, and I managed to finish off a pair of socks: 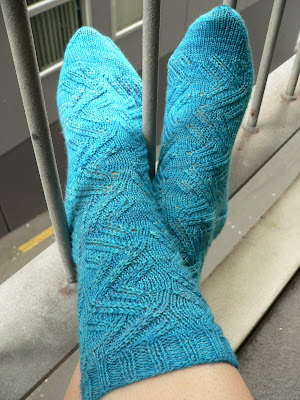 Gretya in Knitsch 'Cook's Beach', knit on 2.75mm needles (a nice change from 2.25mm!) This was a very quick pair of socks to knit, but it took me a little longer because I got sidetracked knitting a Milo vest and a Vanilla bum cover for a wee baby boy born to a family friend last week. No pics at this point, because I knit them while in Napier over the weekend, and handed them to the proud new mum as soon as they were finished. I had neglected to take any form of camera equipment with me at all, so had to borrow a digital camera from somebody else, who doesn't actually own a computer. They assured me they would get the pictures to me eventually, but I have no idea how long that will be so you'll just have to take my word for it.

The Milo vest was knit in Naturally Loyal in shade #931 (a turquoise-blue), and had two owls on the front. As this wee boy (who is as yet unnamed) was born a healthy 8lb 14oz, I skipped the newborn size and went straight to the three month size. Same with the soakers, which were knit in Naturally Loyal in shade #913 (an olive-green - here's the shade card so you can see). Both were excellent, well written patterns. They shall come in handy in future, I'm sure. The best thing was that I was able to send them directly to Hedwig, and have them on hand at the touch of a button. No more carting around bits of paper! W00t!!

I have less than two repeats left on the first panel of the Epic Aran Afghan - I'm very excited to be finishing this panel, and look forward to starting the centre panel. I'm a little bored with the cabling on this one, and it will be nice to have a break from these cables and do some different ones for a while, before having to revert back to them to finish panel #3 (a mirror image of panel #1). I have no idea whether or not I'm going to get this done before Christmas, but I'm determined to try, so I'll keep you apprised of my progress. I know you want to know. This is nail-biting, hanging-on-the-edge-of-your-seat knitting, isn't it? ;-) Mwaaahahahaha!! (Yes, I know I'm an idiot. Let's move on)

Just wanted to say before I go, that the Rugby World Cup final was an absolute nail-biter, but the boys brought the Cup home, and did a fantastic job of making this country proud. Sadly, as we were travelling, we missed the ticker tape parade in Central Auckland, but I hear it was a doozy. Way to go ABs!!!! Now I have to go pick up the not-sick child from school, which means dragging the sick child away from his distraction. Ugh.

Enjoy your week, and think of me this Sunday morning, when I will be getting up (ridiculously early) to run 10.55km with a bunch of like-minded loonies. And coming in somewhere around 200th place, would be my estimate... ;-)
Posted by kreachr at 14:16