On the road again

Yes indeedy, on the road to getting stuff finished! I spent a good couple of weeks basically avoiding my knitting - with only the vanilla handspun socks and the Epic Aran Afghan to knit, I wasn't overly inspired to pick up the needles, getting distracted instead by the second Nikki Heat novel (which, by the way, is just as awesome as the first) and surfing the net for thoroughly excellent Christmas presents (because, y'know, I like to at least pretend to be organised).

So, socks are done: 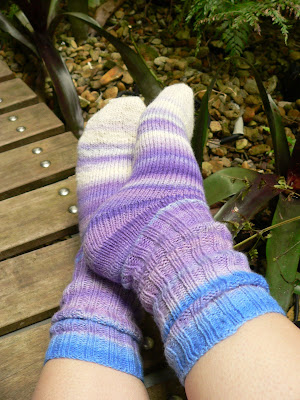 Didn't get them done before the end of October (see previous paragraph) but they were finished in the first week of November, so better than nothing. I just knit generic toe-up socks with a 2x2 rib for the legs, and used Cat Bordhi's most excellent sweet tomato heel. The yarn turned out to be a fairly thick fingering weight, nearly sport-weight, so the socks were only 52 stitches around. They could've done with a few extra stitches in the legs, but I didn't increase before the ribbing, and I couldn't be bothered a) frogging back to include increases, or b) increasing in the ribbing, so they stayed at 52 stitches around. They still fit, so it's all good.

I have started the second (centre) panel on the afghan - cast on yesterday. So far, I'm only 1 1/2 repeats in (of 16) but I expect to get quite a bit done over this week, with X at home with chicken pox. His are worse than T's, and he's rather miserable, so there's lots of sitting on the couch doing bugger all at the moment. I'm not complaining... 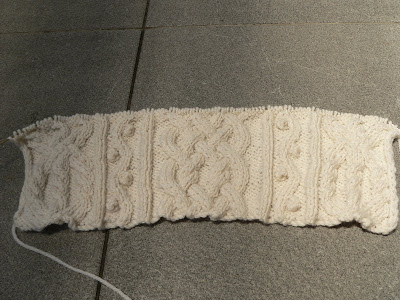 If I get stuck in and actually spend some time working on this thing, I still have a good chance of getting it done before Christmas. Although I also have other projects on the list - ie: a baby cricket vest (special request) that I have the yarn for - some yummy Sirdar Snuggly Baby Bamboo that I can't wait to cast on. I have the pattern ready to go, I'm just waiting for an extra ball of red (because I accidentally ordered pink, which just won't do for the wee little boy it's being made for) and I'm good to go. I also have some sewing projects to get stuck into, and maybe some foodie stuff. Although that can probably wait until last minute. I wonder if I should make a plum pudding again this year...?

Speaking of 'on the road again', I got my feet out on the road (or rather the footpath) yesterday morning, for my longest run to date: 12 kilometres. I nearly reached Kelly Tarlton's! (Which is my personal goal. The next goal after that is running 15km. One step at a time.) It felt good, and I still had some juice in the tank at the end of the run. Made me feel better about the whole quarter marathon thing - I think the combination of head cold/upset tummy/earlier-than-normal start to the morning was probably what got to me at the end of the race. I've come to the conclusion that paying money to enter a race I have no chance of winning is a little pointless, particularly when there's nobody to cheer you on at the end. I'll just keep setting myself goals and cheering myself on (in my head of course - not going to do the whole Rocky-at-the-top-of-the-stairs thing, that would just be weird).

I think it's important, being a stay-at-home-mum that doesn't have to go out and work, to set personal goals. It gives me something to to, and gets me out and about. I don't want to become one of those people with no motivation in life, sitting around all day wearing track pants and sweatshirts with the curtains closed watching movie after movie. Oh no, I'm waffling...

I am however, currently in danger of becoming an internet blob, so I best get moving. Washing to do, dinner to organise, sick kid to tend to, and personal goals to achieve. Onwards!!!
Posted by kreachr at 12:03