You knit and learn...

I knew fairly early on that I'd miscrossed a couple of cables at the beginning of the centre panel of my Epic Aran Afghan, but I couldn't quite figure it out just by looking at it, and decided to knit a full pattern repeat and part of the next, so I could compare and see where I'd gone wrong. 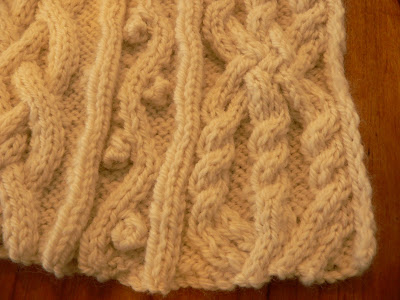 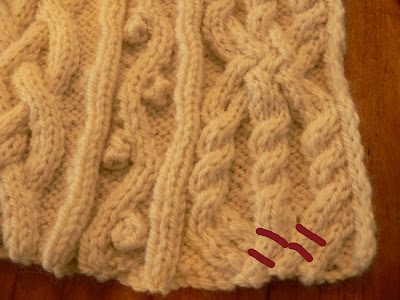 In my 'I've fixed plenty of mistakes, I know what I'm doing' confidence, I carried on knitting, figuring I'd do a Yarn Harlot and snip a thread, re-knitting the mistake row and grafting it back together later. I'm getting pretty good at this knitting lark, right? I'm sure I can fix a wee mistake like that no problem. So I kept knitting. About 3/4 of the way through the third repeat, it was starting to get to me. So I decided 'I'll just fix that now, then it'll be over and done with, and I won't have to worry about it staring back at me any more'.

I searched the net, found a little tutorial on how exactly to do this type of 'repair', and found the strand I needed to snip: 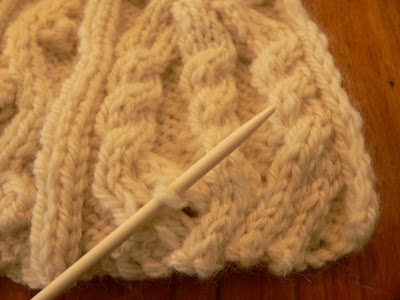 Then it was just a simple matter of undoing the row, picking up the stitches, reknitting it, and grafting it back together, right? Wrong. So very, very wrong. After spending a good quarter hour trying in vain to pick up the stitches (the bottom ones were fine. The top ones? Not so much...) I gave up and decided to revert to my fail-safe method: 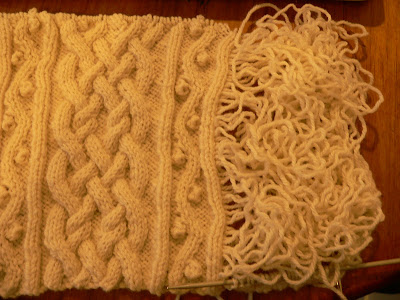 Quite some time later, all is well again: The lesson? Fix a mistake as soon as possible, before it turns into a nightmare!!
Posted by kreachr at 17:59